Messrs K & G have now been rebased for use with my rules and given a coat or two of gloss varnish (sorry about that Archduke). They will be a useful addition to the allied general staff and I’m sure General Mack in particular will be very pleased to have them on board.


So what’s happening with Vintage Leipzig? Well, from my side very little other than just about having finished the Prussian Cuirassiers, it has been a rather unproductive year so far. Roy on the other hand has worked wonders as always and now has a very substantial Austrian army. Hopefully we will be able to set a date quite soon.


On the plus side, I’ve just started working on a second squadron of Naumarkisches Dragoons. You may remember I painted six of these back in 2014 but this was before the cavalry reorganisation that saw us settling on 12 figure units. To make this unit up to strength I have another six figures on the go including this trumpeter conversion. All done with brass rod, superglue and Magic Sculp, no clever stuff with a soldering iron unfortunately.
Posted by Stryker at 09:14 15 comments:
Labels: Austrian, General Staff, Prussian, Vintage Leipzig

The Battle of La Rothière

You’ve probably already seen Matt’s report on this battle here but I thought it was high time I wrote up Napoleon’s take on events. The game was fought a few weeks ago over at Roy’s place using troops from his collection, my own forces remained in camp for this one.

It was great to finally be able to meet up with Matt and push a few toy soldiers around the table with him. Thanks to Roy for hosting the event and to Stuart C for lining up all those guns and continually firing them at us.
Posted by Stryker at 20:36 15 comments:
Labels: Playing Soldiers 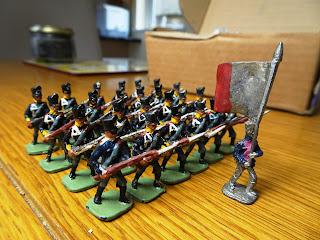 Those of you who have followed this blog for a while may remember that my initial motivation for collecting Hinton Hunt figures was to recreate the Prussian Napoleonic army I had in my youth that has long since gone (the figures and my youth that is). So I was very pleased to receive this lot through the post a couple of weeks ago.

They are the result of a swop made with Matt B during his famous recent ‘UK 20mil wargaming road trip’. The figures are all vintage Hinton Hunt with the exception of the rather nifty and unusual DK flag bearer. I have other castings of PN.3 Prussian private (charging) but they are a mixture of Clayton and more modern reproductions – the vintage ones have proved very elusive. 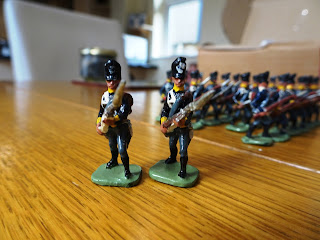 My original 1970's army had three battalions made up of this figure each comprised of 21 figures (18 of the advancing figure plus officer, drummer and standard bearer) so I got to know all the variations in casting shape and quality as I slowly plodded through painting them. The legendary flash metal was there in abundance but I remember noticing two distinct figure types – one nicely proportioned and a rather thin tall fellow – so it was interesting to see that both these types were included in this batch.

I’m looking forward to stripping and re-painting these although I’m not sure when that may happen.
Posted by Stryker at 09:25 8 comments:
Labels: Prussian

The last time I went for a hike with Andy up to Charmy Down he suggested that next time we venture out we head for Stantonbury Hill. Well, time has really flown by and finally I realised that I’d better dust off my walking boots and take him up on his offer before old age and infirmity sets in. So yesterday myself, Andy and Daisy set off into the blue equipped with a plentiful supply of sandwiches, cake, crisps and water – but no ginger beer.


We parked up at Newton St Loe on the road next to the excellent farm shop and set off on a circular route that took us first to Pennsylvania Farm where we had an interesting discussion on just how the place got its name (we were wondering because there is a Pennsylvania just north of Bath but a good 15 miles from this place). After that it was cross country on footpaths and before we knew it we were in the most beautiful countryside at a distance barely half a mile from Bath but seeming a million miles away.


We passed through picturesque Englishcombe Village and on to Inglesbatch, then it was back to the footpaths which led us through a field of nervous looking cows (I think it was Daisy they were nervous of) to Priston Mill. Here it was time to dip into the sandwiches whilst Andy carried out an unsuccessful reconnaissance looking for a path that was on the map but seemed to have been removed from the actual landscape.


Undeterred we headed on towards Stanton Prior where after a quick visit to check out the inside of the church (nice if you like Medieval churches) we decided it was time for more sandwiches and a sit down in the sun. By now Stantonbury Hill was starting to loom large on the horizon and we were starting to feel tired however, revitalised we set off on the final leg.

Stantonbury Hill is the site of an Iron Age hill fort but unlike Solsbury Hill (on the east side of Bath) its slopes are covered in trees and it’s hard to make out any remains of earthworks. Having battled our way to the top it was clear to see that at some point the ground had been levelled as it was quite flat. It wasn’t hard to picture the place covered in Iron Age huts even if we couldn’t see any signs of the ditches or banks that must have once surrounded it.
Finally it was time to force our way through the undergrowth to get back down the east side of the hill. This was hard going as the path was very overgrown and it involved climbing a five bar gate whilst fighting with overhanging branches but we eventually made it out and back onto the road. From there it was a matter of heading back cross country to Newton St Loe to pick up the car.


Andy figured we’d covered about 10 miles (it felt like 20) and I now have new found respect for Jackson’s ‘Foot Cavalry’ who reportedly covered 35 miles a day in their marches up and down the Shenandoah Valley. We decided we may return to Stantonbury Hill in the winter when the foliage is off the trees to see if we can find any traces of earthworks – if we do though we’ll just park the car at the bottom!
Posted by Stryker at 21:45 5 comments:
Labels: Off Topic

Before I cleared away the figures following the recent game I thought it would be a good idea to hold a grand review. All my Hinton Hunts are on the table with the exception of the individually based skirmishers and some of the personality figures (which weren't used in the scenario) and the Austrian Hussars who were somehow left off the OOB.

If it wasn't for the lead mountain I'd be tempted to say this project is over.
Posted by Stryker at 08:58 18 comments:
Labels: On Manoeuvres
Newer Posts Older Posts Home
Subscribe to: Posts (Atom)