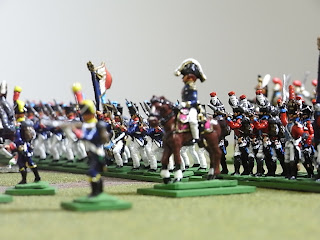 I have nothing new to post this week as my hobby time is being taken up with “The Battle of Crane’s Station” still raging over on my other blog (click here).

However, I did come across this picture taken back in October during my last Hinton Hunt game with Roy. The picture is a close-up of the French battle-line as it advances towards the Duke of Wellington’s position on the ridge. Marshal Lannes (the one out of focus on the horse) is leading the 4th Swiss Infantry forward. The Grenadiers are actually FN/23 Old Guard Grenadier (firing), superbly painted for me by Matt.

For the full story of “The Battle of the Ridge” click here.
Posted by Stryker at 15:17 4 comments:
Labels: French, Playing Soldiers 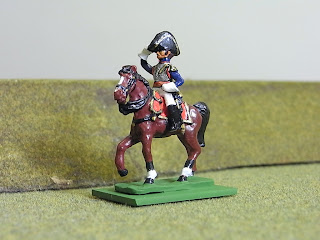 This is the result of my latest painting efforts - FN/361 GENERAL NANSOUTY in Cuirassier General’s uniform with cocked hat (on horse FNH/10). Not one of the best of the Hinton Hunt personality figures in my opinion as the position of the right arm looks a bit odd but at least this is a genuine vintage figure.

I’ve mentioned before that Marcus Hinton chose his personality figure models in order to show as much variety in uniforms as possible. This is why quite a few of the Marshals are missing from the Hinton Hunt line-up in favour of the more obscure Generals like Nansouty (no offence to the Nansouty family). This does give me the impetus I need however to perhaps get on and paint up some Cuirassiers for him to command.

On that subject, painting has taken a back seat this week while the campaigning season gets underway in the garage. Sadly the current game doesn’t involve the Hinton Hunts so I can’t really post it on this blog but if you’re interested in the American Civil War click here to see what’s been going on.
Posted by Stryker at 19:55 4 comments:
Labels: French, General Staff 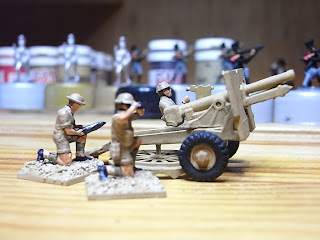 I first made one of these Airfix 25pdr kits when I was twelve and I remember that it was a right old fiddle. That one was painted green and saw service with some first-issue Airfix British Infantry (the tiny rubbishy ones). This one is joining the Desert Rats and despite being labelled as “Skill Level 2” I found it just as fiddly as before with several vital bits disappearing forever in the pile of the carpet. I have concluded that my own skill level is definitely “1”.

I am however very pleased with my conversion of an Airfix machine-gun loader to a gunner holding a shell. I cut away the ammo box attached to his leg and fashioned a shell out of green-stuff. I had to do this because the gunners that come with the kit are huge and blobby and slightly sinister looking. The figure with the binoculars is from the newer 8th Army set.

Anyway, now this little diversion is out of the way I'm going to knuckle down and paint more Hinton Hunt Prussian Jagers.
Posted by Stryker at 11:24 3 comments:
Labels: Off Topic 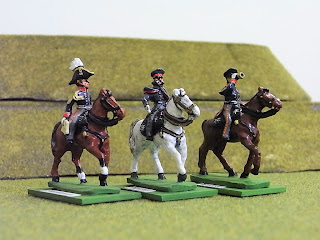 Some time ago Rafa asked to see a picture of the complete Prussian High Command group. It’s taken me a while, due in part to my decision to repaint Gneisenau, but here they are.

From left to right we have PN/61 General Gneisenau, PN/60 Marshal Blucher and PN/64 General (mounted) looking through spy-glass (painted to represent General Bulow). Gneisenau and Blucher are mounted on Prussian horse PNH/1, Bulow is a one-piece casting.

So that’s the commanders done, now for some troops!
Posted by Stryker at 19:57 1 comment:
Labels: General Staff, Prussian

Progress in the Garage 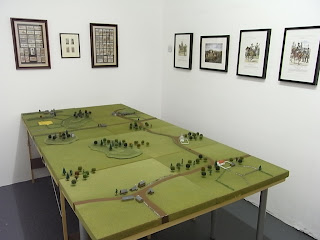 I finally managed to get to Ikea this weekend and get the bits and pieces I needed to sort out my wargame room in our garage (funny how a trip to Ikea can actually be enjoyable if it’s for something like this). As you can see from the picture the place is beginning to take on a homely feel now I have all my prints and pictures up on the walls.

One of the things I bought was an extension table that takes the playing area to a full 8’ x 4’ and there’s actually room to extend it by a further two foot in the future if I want to. I was toying with the idea of getting a proper table constructed rather than the slightly wonky arrangement I had but the extra table has added quite a lot of stability so I’ll keep things as they are.

The terrain laid out on the table is for a 1/300th American Civil War battle I will be fighting soon. If you’re interested then keep an eye on my other blog Brother Against Brother (click here) to see how the battle develops.
Posted by Stryker at 21:02 7 comments:
Labels: Off Topic
Newer Posts Older Posts Home
Subscribe to: Posts (Atom)