Now that the French army is more or less complete I thought it would be good to turn my attention to the Prussians. It was the Hinton Hunt Prussian army that I painstakingly collected and painted in my youth that was the original inspiration for this blog so it seems fitting to push them to the front of the painting queue now I’m at the seven year milestone. 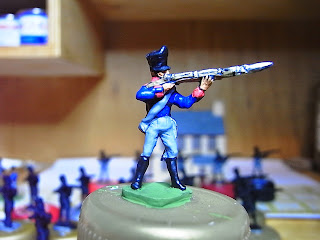 A simple paint scheme at last - blue and grey, what can possibly go wrong?

Another reason for elevating the Prussians to this position is ease of painting – blue and grey are very forgiving colours to paint especially when combined with the black straps of fusiliers. In fact I would say that Prussians are the easiest Napoleonic uniforms to paint followed in order by Russians, French, Austrians and British (am I the only one who puts off painting British infantry?). 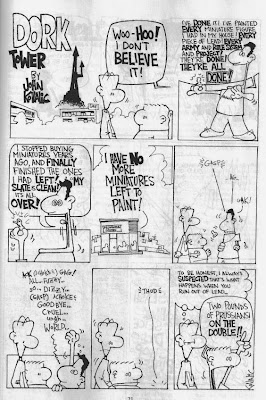 This is yet another reason to go with Prussians and a warning to us all about keeping substantial reserves in the lead pile.

The only problem with going Prussian is that I have found it very hard over the years to accumulate enough Hinton Hunt figures to make up full units. I do have one or two units now but vintage figures are very thin on the ground so I will be using Clayton and reproduction figures where necessary to fill the holes in the ranks. 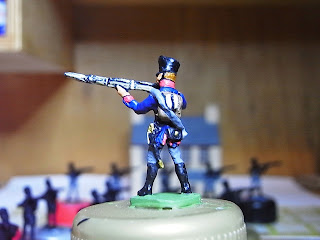 As I remember the Hinton Hunt painting instruction sheet gave details for a Silesian regiment with yellow collar and cuffs but I've gone with red for West Prussia on this one emulating the unit I painted back in 1972.

So to get things rolling I’ve started work on a unit of West Prussian Fusiliers using PN.4 Private (firing). This unit is the exception to the rule as it will be made up entirely of vintage figures, some lovely old castings I acquired a few years back in a virgin unpainted and fully flashed up state. I’ve been looking forward to doing these as I painted a battalion of them for my original army back in the 70s.
Posted by Stryker at 10:25 7 comments:
Labels: Prussian 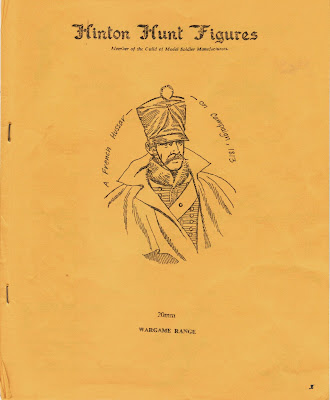 Believe it or not it is seven years ago today (click here) that I started this blog to document my attempt to collect two opposing wargame armies made up solely of 20mm Hinton Hunt figures. Back then it seemed like a pretty impossible dream but after the recent spate of recruiting activity for the French army it would appear that I am nearly there.

A tot up of the troops painted, based and ready for action comes in at 592 and of these 367 have been painted by me, 90 by Matt, 36 by Don, 24 by Lee with a further 75 figures refurbished by me (the Swedes). By accident more than design the figures are split pretty much 50:50 between the French and “Nations Allied against Napoleon” so I do have the required two armies albeit that the mix of Allies is not really an historical one.

To address this problem I intend to split the Allies into two different forces - one will be a ‘continental’ army comprised of Austrians, Russians and Swedes and the other will be for the ‘hundred days’ with British, Nassau and Brunswickers (the Prussians will float between the two forces to make up numbers).

So there are still a few more units to paint before I hang up my brush and, although it's unlikely that this project will continue for another seven years, I intend to carry on until either my enthusiasm or the lead pile runs dry.
Posted by Stryker at 08:32 15 comments:
Labels: Waffle
Newer Posts Older Posts Home
Subscribe to: Posts (Atom)