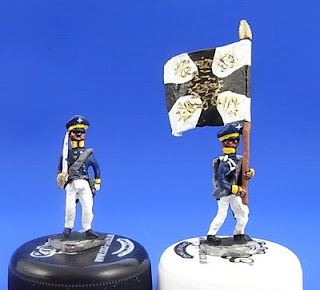 I mentioned in a previous post that the original Hinton Hunt 20mm wargame range only offered three standard-bearer figures and these were limited to the French and British forces. They were BN13 and BN14 representing Regimental Colours and King’s Colours respectively and FN4 Colour Bearer for the French 45th Regiment.

When David Clayton took over production of Hinton Hunt in the US he introduced several new standard-bearer figures presumably in an attempt to fill this gap. His figures are not the best of sculpts but they do at least provide some reasonable models with cast-on flags to brighten up the battlefield. The alternative would be to convert some regular HH figures but this isn’t something I’m particularly skilled at so I’m happy to use the Clayton ones.

The figure pictured is PN23 Prussian Landwehr Colour Bearer Advancing. These cast-on flags are very delicate and I managed to break this one while striping the old paint from the casting (thank goodness for super glue). The other figure is PN20 Landwehr Officer Marching - another Clayton casting but this time of an original Marcus Hinton sculpt. The flag is painted free hand, something else I’m not very skilled at but it’s passable when viewed from a distance.
Posted by Stryker at 19:13 8 comments:
Labels: David Clayton Figures, Prussian 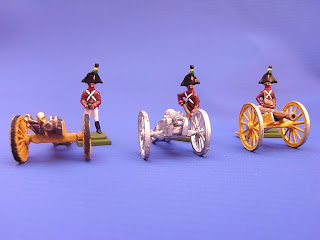 You may recall that I have been using plastic guns from various Revell/HaT sets with my Hinton Hunt gunners. This was because I had no HH artillery pieces when I was painting gun crews and I justified it to myself on the grounds that “HH artillery is out of scale anyway”.

Well, it is true that the HH pieces are a little small in comparison to the gunner figures but I have been fortunate to acquire several vintage models recently – thanks largely to Don. The picture shows (from left to right) a vintage Austrian field gun (AL5), a model from the Newline Designs range (AU 12/1) and a plastic gun from the HaT Austrian artillery set (8037).

It’s fairly obvious from the photo that the model produced by Newline Designs is a very close fit in size with the original HH one and they are superb little castings as well. The plastic gun is a bit big and thin and er, plastic. So in the true spirit of this project I have decided to include vintage models where I have them and use Newline substitutes where I have none.
Posted by Stryker at 08:44 5 comments:
Labels: Artillery, Austrian, Waffle

Just back from a nice holiday in Dorset with Mrs S and the in-laws. The high point for me was finally getting to visit Bovington Tank Museum only fifteen years after first expressing a desire to go. We did get to Monkey World next door once when the kids were small which is not quite the same thing. 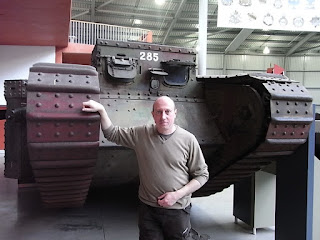 The Mark I tank was smaller than I thought

Like many men I have a grim fascination with these machines and to see them up close and be able to touch them was quite an experience. I enjoyed seeing the tanks built in period up to the end of World War II but the more recent examples in the museum made me feel a little uncomfortable. The museum is well worth a visit – we were there for 3 hours and only really saw about a third of it. 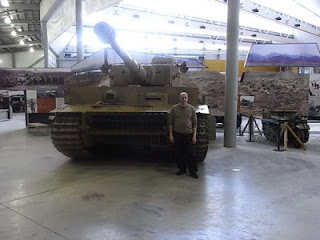 The Tiger tank was bigger than I thought

My second favourite destination of the week was Maiden Castle, which is a massive Iron Age hill fort just outside Dorchester. We’ve driven past it many times over the years but this was our first trip on foot. We went on a sunny day but at the top of the hill there was a force 10 gale blowing. Undeterred Mrs S and I managed to walk the entire circuit of the rampart, which must have been over a mile in circumference. 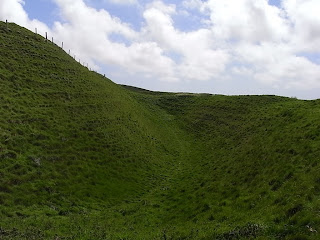 One of the ditches at Maiden Castle. These things are huge and you can’t really get a sense of scale from this photo.

Interestingly, on the very top of the hill just as I was starting to absorb the atmosphere and imagine the place populated with Ancient Britons, Mrs S announced that she had great reception on her iPhone. This enabled her to complete several transactions on her eBay shop from the top of a scheduled monument. 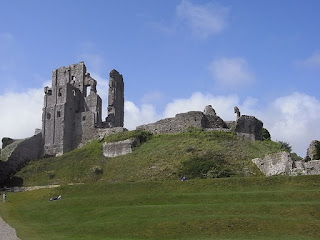 And finally, number three for the week was Corfe Castle. We had been there before but quite how we struggled up the hill to the Keep with a pushchair, toddler and baby escapes my memory. The view from the top is great and there are enough ruins left to make it worth the climb. Most of the walls show evidence of the attempts by Cromwell’s men to blow the place up at the end of the Civil War – they didn’t succeed completely but they didn’t do a bad job either.

Posted by Stryker at 19:14 No comments:
Labels: Off Topic 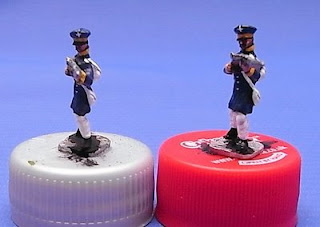 This is not the result of half-rations or a forced march but an illustration of the ‘diminishing mould’ effect. Both these figures are David Clayton produced castings of Hinton Hunt PN19 Prussian Landwehr Firing. The one on the right is a decent specimen while his puny friend on the left looks barely strong enough to hold his musket up. When Clayton took over production of Hinton Hunt he had very few master figures from which to make moulds so many were created using second or even third generation figures. This resulted in a progressive loss of detail and reduction in the size of the castings.

It wasn’t until I came to paint up my first batch of these Landwehr figures that I began to see how much variation there really was. The figure on the right is of such good quality that I would have thought at first glance it was a vintage casting. The one on the left is considerably thinner and missing some of the detail such as the correct number of buttons on the front of his tunic – yes I really did count the buttons (mental note to self – must get out more). Another noticeable difference was that the weedy ones came with square bases that had a curved impression on the corners rather than actual rounded corners. Again this must have been something lost in the moulding process – a little bit of attention with a file soon put this right.

This problem in the moulding is by no means confined to just Clayton produced castings as vintage Hinton Hunt ones sometimes have similar variations as well. I remember receiving batches of figures direct from Hinton Hunt in the early seventies where the same figure type had at least three variations in size and quality. Roy says that Marcus Hinton himself would often create moulds from production figures rather than master figures so I guess this explains it. Anyway, I think the scrawny look is perfectly acceptable for Landwehr but perhaps not for the Imperial Guard.
Posted by Stryker at 19:28 2 comments:
Labels: David Clayton Figures, Prussian, Waffle 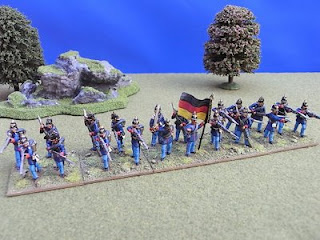 I finally finished the Schleswig-Holstein infantry unit and I have to say I am pretty happy with the result. It’s been a nice change to paint some bigger figures (these ones are 28mm) and experiment with shading rather than painting block colours as I do with the Hintons. I also got around my glossy finish problem by applying Testors Dullcote over the varnish, which worked a treat – thanks for the hint Matt. 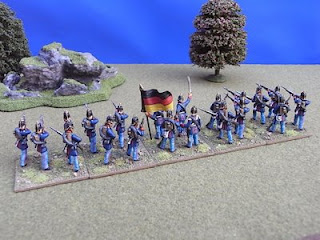 I’ve already explained that I know virtually nothing about the first Schleswig-Holstein war and my uniform reference book for this conflict is restricted to a single page in my copy of Blandford’s “Military Uniforms of The World”. Luckily Matt kindly sent me some painting notes or I would have been completely stuck. I thought it was actually quite old school to approach a new period in this way with no preconceptions, very like the way I approached wargaming in my youth. In fact I may just leave it that way and not buy any reference books at all.

I was hoping that by allowing myself this little distraction I would be able to focus with full attention on the Hintons for at least the rest of this year but my strategy seems to have backfired on me as I have enjoyed painting these so much. Matt is just about to release some Schleswig-Holstein Jagers and it seems poor tactics to leave my infantry without a skirmisher screen.

For now though I am knuckling down to work on those HH Landwehr – honest!
Posted by Stryker at 20:44 7 comments:
Labels: Off Topic

I’ve recently received some pictures from Don in the US of his impressive Hinton Hunt armies in action and I thought it might be a nice idea to show some of them here. Don and his group use a variation of the rule-set “Grognards & Grenadiers” using a hex based terrain system and I think the overall effect is very pleasing. The figures are a mixture of both vintage and Clayton produced Hinton Hunt and some Der Kreigspielers - click on the pictures for a closer look. 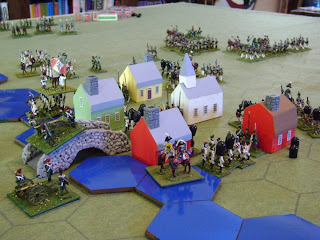 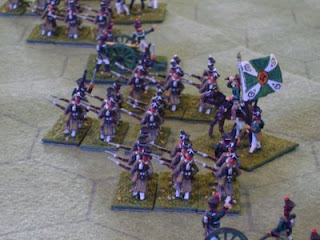 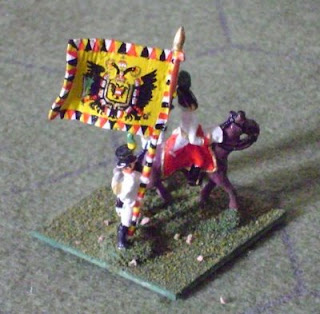 Drat and blast – that’s much better than my Austrian flag! 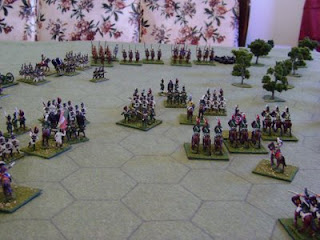 Are those Don’s Cossacks in the distance (Don's Cossacks - geddit?) 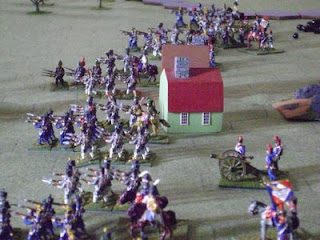 Now, if I could just crank up the painting output maybe I could have armies like this by say 2020?
Posted by Stryker at 19:42 5 comments:
Labels: Guest Appearance, On Manoeuvres, Playing Soldiers
Newer Posts Older Posts Home
Subscribe to: Posts (Atom)