All quiet on the painting front 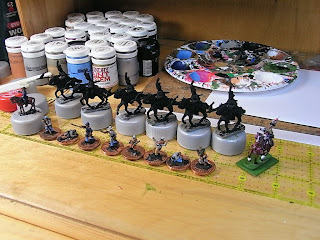 I’ve been aware in the back of my mind that I’m a bit overdue for a blog post but the truth is that I have done very little in the way of painting since my last post. In fact all I have managed since then is to black undercoat my Imperial Guard Polish Lancers.

This picture of my work desk shows the whole sorry story – the six lancers awaiting a splash of colour (any colour will do), a handful of 15mm Fire & Fury markers awaiting varnish and basing and poor old neglected Poniatowski waiting for his name label to be attached to the top of his base.

My excuse is that we’ve been pretty busy with work and various family events plus the fact that we went away last weekend.

Normal service will be resumed as soon as possible.
Posted by Stryker at 19:59 7 comments:
Labels: Waffle 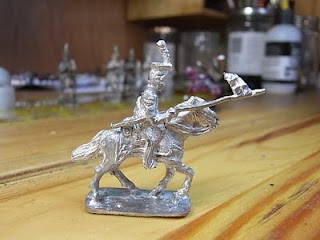 Last night I put my 6 x FN43 French Guard Lancers into a pot of bleach to strip the old paintwork and this morning when I scrubbed off the paint I had a pleasant surprise. The figure that I thought had had its original lance removed (look here) actually turned out to be FN44 Lancer (mounted) charging with separate lance. This is one of the advantages of repainting these old figures because I never would have spotted this without removing the old paint. For some reason Marcus Hinton chose to make two versions of the one-piece Guard Lancer figure, the first with the traditional Hinton Hunt “telegraph pole” lance moulded to the body, and this figure with a separate lance arm (with thinner lance) to be stuck on. Anyway, I just felt I should share this with the rest of the Hinton Hunt geek world as nobody else here is likely to be very interested.
Posted by Stryker at 13:55 3 comments:
Labels: French, Waffle

The Hinton Hunt Catalogue says; “Marshal Josef Anton, Prince Poniatowski was not only a hero of Poland but was one of Napoleon’s most dashing Marshals. He cut a splendid figure in Lancer style uniform and fur cloak with his horse in an elaborately trimmed and tasselled harness”. It was pretty obvious to me as I painted this one that Marcus Hinton must have enjoyed sculpting him because the figure has some great detail and certainly captures the “dashing” look. 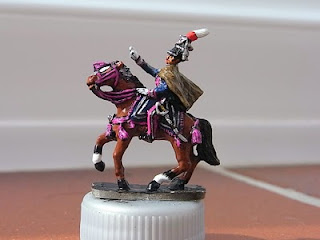 When I was in my early teens, and developing my interest in the Napoleonic Wars, I came across a book on the 1813 campaign. It was rather dry reading (as many such books were back then) but Poniatowski and his part in the battle of Leipzig fascinated me. He was the shortest serving of all Napoleon’s Marshals holding the rank for a mere three days before drowning whilst trying to swim to safety across the Elster river. He was a great friend with Murat and they must have had fun trying to out do each other with their taste for gaudy uniforms. Of course though, Poniatowski really was a Prince and hadn’t had one of Napoleon’s made up titles bestowed upon him - I wonder if Murat was annoyed by that? 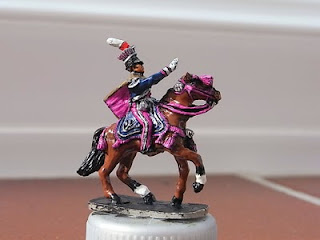 This figure is one of only two “horse attached” castings amongst the Hinton Hunt personality figure range (the other being BRN/30 The Duke of Brunswick). I decided to give him a bay horse rather than the obligatory white one because I already have three personality figures riding white horses (and also I’m no good at painting them). Next up – Polish Lancers of the Guard.
Posted by Stryker at 17:02 5 comments:
Labels: General Staff, Polish

Quite some time ago I bought an Airfix model of La Haye Sainte on eBay thinking that it might be a nice terrain centrepiece for the Hinton Hunts to have a scrap over. I bought it before we moved last year and it has been off the radar in terms of modelling priorities since then. However, following the Battle of the Crossroads the Duke of Wellington has been looking for a position with a decent stronghold on which to anchor the Allied line against any further French aggression. 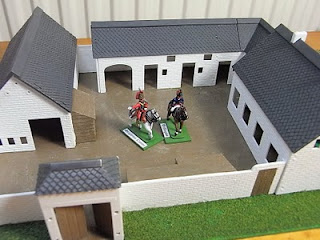 I used to own one of these models back in the early 70s when it regularly took part in battles waged on my bedroom floor between large armies of unpainted Airfix Napoleonic figures. I never glued it together because I didn’t really have the space to store it so it was usually in a pretty ruined state by the end of hostilities. This time though I have given the model the full treatment by sticking it to an MDF base and painting and flocking it. 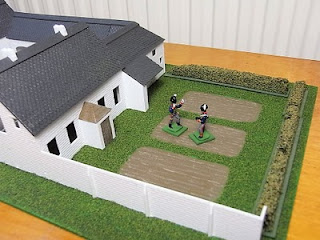 Mercer and one of his men are digging potatoes in the garden (or are they cannon balls?)

I’m actually pretty impressed with my own handiwork because I’ve never really attempted much in the way of scenic items before. Even Mrs S seemed to like it “that’s very nice and very sad all at the same time”. Well sad maybe (I’m reminded of the episode of The Royle Family where Dave makes a toy farm for baby David) but at least the Duke seems grateful and he has just put in a request to Horse Guards for some Riflemen to defend the place.