Looking back on the blog I see that it’s thirteen years since I last attempted to paint horses for the Greys (click here). This time around at least I have those original figures to use as a painting guide and fortunately I made a note of the colours I used.

I don’t usually make very much effort with my horses, but I’ve had to with these and in this instance they have taken almost as much time to paint as the riders. Hopefully I’ll have the whole lot finished sometime next week.

I have had an interest in the ‘45 Rebellion for quite a few years fostered in part by visiting the Culloden battlefield back in 2011. As a wargame project though it has remained pretty much a pipedream due largely to the lack of any figures that took my fancy.

Just after we moved to Scotland four years ago my son-in-law took me to the Falkirk wargames show (Carronade) where I first laid eyes on the superb range of 28mm Jacobite wars figures made by Crann Tara Miniatures. It was a temptation I resisted until now.

This will not be a major project and for the moment I only have enough figures for one British regiment and one Jacobite regiment. I’m not sure if I will ever get as far as wargaming with these figures and they may just become a display case item, but I do always like having something else on the go as a change from painting Hintons.

Posted by Stryker at 16:34 20 comments:
Labels: Jacobites, Off Topic

The sharp witted amongst you may have realised that in expanding the Inniskilling’s I made my squadron of six DK British Dragoons redundant. The solution to this was to refurbish another six figures to make them up to a full unit. 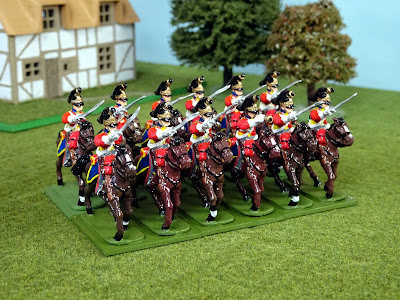 The figures are Der Kreigspieler 825-215 British Dragoons, and these castings were all donated to me by Don over 10 years ago. I have only touched up Don’s old paintwork, put socks on the horses and in some cases changed the facing colours – I also converted one to a trumpeter because you know how much I like doing that now.

The unit will represent the 1st Royal Dragoons who were the English component of the Union Brigade at Waterloo and famously captured the Eagle of the French 105th Regiment.

Last year Mark very kindly sent me six Scots Greys castings he had spare from his own project. The figures had all seen better days with swords missing, limbs detached from bases, and some tails docked but I thought it would be a good challenge to restore them.

The plan now is to paint them and add them to my current squadron of six figures to make up a full unit – you can never have too many Scots Greys.

The 6th (Inniskilling) Dragoons played no part in the Peninsular War but did see action at Waterloo where they formed part of Ponsonby’s Brigade. They took part in the famous charge against D'Erlon's corps on June 18th fighting alongside the Greys and 1st Royals although unlike those regiments they didn't manage to claim any French Eagles that day. 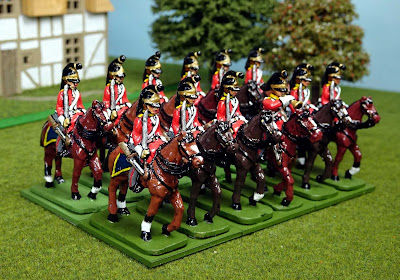 My own tribute in miniature to the Inniskilling’s has taken quite a few years to complete. I bought the first four figures from Mark way back in 2008 and the next two came from Clive soon after. For many years they fought as an amalgamated unit together with six DK Dragoons I received from Don. 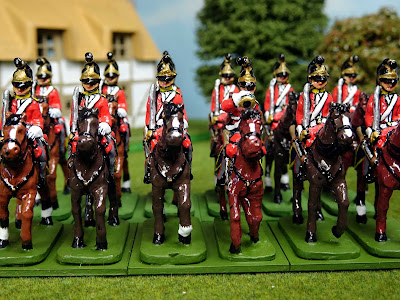 The recent acquisition of five more vintage figures has allowed me to expand them to a full unit. The figures are all vintage ones that I have stripped and painted. The bugler is a conversion from DK 825-215 British Dragoon (I noticed a bit too late that the bugle is resting right between the poor horse’s ears). The figures are:
11 x BN/40 Dragoon (mounted) trotting in helmet with flowing horses tail plume
1 x DK Dragoon (converted to bugler)
Posted by Stryker at 15:09 22 comments:
Labels: British, Heavy Cavalry
Newer Posts Older Posts Home
Subscribe to: Posts (Atom)