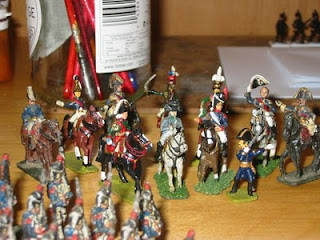 This may be my last post for a while as the moving date looms large and what more fitting a picture to show you than this one I snapped about three years ago of Napoleon and some of his marshals reviewing the Imperial Guard.

In the back row (from left to right) are FN224 General (painted as Lannes), Baraguay d’Hilliers, Soult, Murat, Junot, Davout, and Massena . In the front are Bessieres, Napoleon, Dorsenne and Cambronne. What strikes me the most is that in all this time I have only managed to repaint three of the figures shown here. There’s a lot more painting to be done.

Mindful of Matt’s horror story about losing some of his soldiers during a house move I have been negotiating with Mrs S over the safe passage of my Hinton Hunt collection in the car rather than the removals van. However, with the back seat to be stuffed with Mrs S’s knitting, our two dogs, the kettle and various heirlooms this may not be a done deal yet.
Posted by Stryker at 09:10 7 comments:
Labels: French, General Staff 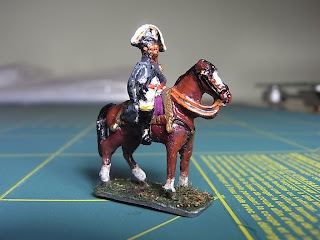 I know I said recently that I wasn’t going to buy anymore Hinton Hunt figures and that was my intention. However, I was idly perusing eBay last week when I came across a listing for Marshal Ney. Now Ney is one of the personality figures that I didn’t have and quite wanted to have so I put in a bid not really expecting to win, especially given the sort of prices that HH have been going for in the last year or so.

Well I did win but I think perhaps I should have paid more attention and looked a bit closer. The problem is that I’m pretty sure the horse is not Hinton Hunt (and this is probably why I won) because the positioning of legs doesn’t look right and it’s certainly not a French horse anyway. The base is Hinton shaped with rounded corners but the underneath has been filed too flat to show any markings if any were ever present. I am hopeful however that the figure of Ney is actually Hinton Hunt FN354 Marshal Ney but having looked at other available pictures on the Hinton Hunter and LazyLimey I not entirely sure. The genuine item has the head looking straightforward whereas this chap is looking slightly to the right although it is possible that the head has been repositioned.

Anyway I thought I’d throw it open to the floor – is it Ney or is it not Ney? If not, any ideas what make? If it’s not HH perhaps you could let me down gently as I may not live down my mistake.
Posted by Stryker at 20:43 17 comments:
Labels: General Staff 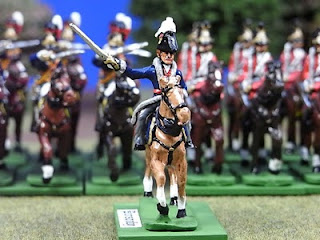 Well all the Hinton Hunts are packed away ready for the move and my hobby room has become a bit of a sad place now with an empty display case and boxes piled up on the floor. It’s getting to the point where I can no longer pretend to be doing "important" packing in the evening and may have to turn my attention to sorting out our possessions in the rest of the house.

Consequently no painting of miniatures is happening at the moment so I have had to trawl through my old photos looking for something suitable to post. This is another picture of General Ponsonby taken during the recent review of the British cavalry division. I think he is possibly my favourite personality figure.

In the true style of an intermission I am however able to offer you some music. My son Joe is in the final year of a Music Composition degree and as part of his dissertation has to produce several bits of work. Take a look at his MySpace account and listen to the track called Party Over Here – any feedback (here or there) would be appreciated.
Posted by Stryker at 08:53 5 comments:
Labels: General Staff, Waffle
Newer Posts Older Posts Home
Subscribe to: Posts (Atom)