A mini campaign and a battle with no name

Yesterday Tony and Goya braved the Perthshire snow to convene here at Hinton Hunt Towers for a game of Muskets & Marshals. The scenario was the result of a mini campaign played between them with myself acting as umpire. The campaign was set in a ficticious and nameless area of central Europe during 1813/14. The idea was to produce a game where each player had a say in what forces would be present and what terrain would be fought over.


In the end it was Tony (Napoleon) who made the aggressive moves to bring about a battle and Goya (Blucher) who got to choose the battlefield. Because Tony had initiated the battle he was obliged to attack the Prussian held town while Goya’s outnumbered Austro-Prussian army awaited reinforcements. It resulted in what appeared to be a scenario stacked in the favour of the French who began the game with a 4:3 advantage in numbers over the allies. This is how it went.

An unusual scenario that I would never have dreamt up off the cuff but it led to an interesting game. My thanks to Tony and Goya for indulging me.
Posted by Stryker at 15:55 17 comments:
Labels: Playing Soldiers 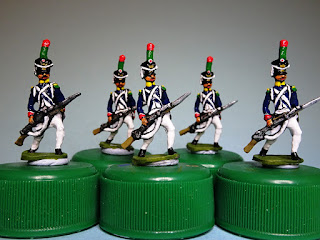 I’ve been making a fair bit of progress with the Young Guard Voltigeurs although this has slowed somewhat in the last few days. I’m optimistically hoping to have the whole unit finished by the end of the month (or by mid-Feb at latest).

I finally took the plunge and bought some Winsor & Newton Artisan Gloss Varnish as recommended by Wellington Man and Ilkley Old School. Those of you who have followed this blog for a while will know about my various varnish problems. Originally I was using Humbrol Satincote but as the quality of this product decreased I have been travelling more and more towards full gloss. I thought that if any troops deserved to be 'proper shiny' it should be the Guard.

The figures pictured are FN/77 Voltigeur Guard (running at the trail). These 5 plus 1 officer will make up one of my 6 figure companies, the others will be comprised mostly of FN/75 Voltigeur Guard (charging). The running at trail figures here are all vintage castings but 4 of them had miscast musket butts which had to be extended by using some extra muskets I had lying around. It was a bit of a fiddle and I’m hoping the ends won’t drop off in action.
Posted by Stryker at 19:29 11 comments:
Labels: French, Guard

Old Guard for a New Year

Spurred on by the arrival of the foot Chasseurs I have decided to make 2018 the year of the Old (and Young) Guard. My rather ambitious plan is to paint all my remaining Imperial Guard foot figures so that at the end of the year I will have 2 x units Old Guard Grenadiers, 2 x units Old Guard Chasseurs, 1 x unit Young Guard and 1 x unit Marines of the Guard.

It’s a great plan but to make it happen I will have to paint 113 figures which although it may not seem a lot is a tall order for me when you consider that last year I only managed to paint 49 Hinton Hunt’s. Even when you allow for the fact that 7 of those were mounted figures (let’s count those as 2 foot figures) and if you add in the 27 figures painted for my Boer War project and 14 figures painted for my WWII western desert project (not anywhere near as time consuming as Napoleonics so let's count those as half a Hinton Hunt) it still only comes to the equivalent of 76 figures.

This means I will have to resort to some production line painting methods (not a favourite of mine) and also stay focused (so no tanks but maybe a few Boers) if I’m going to achieve my aim. To get things moving I have cleaned up and primed the rest of the Young Guard unit and lined up my new paint brushes ready for action.
Posted by Stryker at 13:04 16 comments:
Labels: Guard, Waffle
Newer Posts Older Posts Home
Subscribe to: Posts (Atom)