We played the C&CN Quatre Bras scenario on Tuesday and an excellent game it turned out to be. Goya, as host, was umpire while Tony commanded the French and I took control of the allies. We played Tony’s Ramekin rules variant with a few new tweaks and the result was another very near-run thing.

This was yet another game with a lot of ebb and flow that went right down to the wire. My thanks to Goya for hosting, umpiring and providing a very nice lunch, and to Tony for a most enjoyable game.
Posted by Stryker at 11:26 15 comments:
Labels: Commands & Colors, Playing Soldiers 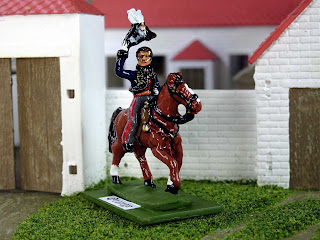 This is another contribution to the Quatre Bras game next week – DN/30 H.R.H. The Prince of Orange, in hussar jacket, full trouser and waving his cocked hat. A rather nice vintage casting I’ve painted in accordance with the original Hinton Hunt painting instructions.

I must confess that my image of the Prince has been tainted by watching Paul Bettany’s portrayal of him in Sharpe’s Waterloo. So, although Goya insists he should be known as Slender Billy, he will always be Silly Billy to me.

In reality the Prince was a reasonably experienced officer by the time of Waterloo having served on the Dukes staff in the peninsular. His performance at Quatre Bras was solid but he was later criticised by British writers who naturally enough wanted to big-up the part played by Wellington and his generals.
Posted by Stryker at 10:59 8 comments:
Labels: Dutch, General Staff

Hinton Hunt never made any Brunswick artillerymen, so I’ve had to resort to the dark art of head swapping to create some. The donor bodies are all British Horse Artillery and the heads are from various odds and ends of Brunswick infantry I had lying about.


I’m quite happy with the Horse Artillery figures but the Foot Artillery heads are a bit big for the rather spindly RHA bodies resulting in quite a menacing pinhead look. The guns are on loan from the French, apparently the canny Black Duke sent his artillery chief to an auction following the Battle of Leipzig where he snapped up enough captured French guns to equip several batteries.


So, I can hear you thinking “hey, those aren’t Prussian – what’s he up to?” well I can only blame Goya for this distraction. Next week he is hosting a C&CN game of Quatre Bras and we were short of a Brunswick battery for the OOB. A battle report will be posted here in due course.
Posted by Stryker at 20:00 18 comments:
Labels: Artillery, Brunswick, Commands & Colors, Conversions
Newer Posts Older Posts Home
Subscribe to: Posts (Atom)