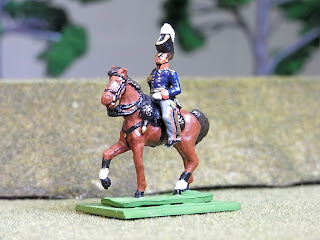 I’m not really sure because its previous owner had already very nicely painted this one. However, my OCD compelled me to repaint my figure of Gneisenau (last glimpsed here) because it just seemed right to do so. I figured that, although it’s clear that I won’t be able to paint every casting in my collection by myself, I should at least attempt all of the command figures.

Major-General Gneisenau was Blucher’s quartermaster-general during the Wars of Liberation and chief-of-staff during the Waterloo campaign. He took command of the Prussian army when Blucher was temporarily put out of action during the battle of Ligny and subsequently took up the pursuit of the French after Waterloo, capturing Napoleon’s coach and making sure that the Prussians were the first of the Allies to enter Paris. 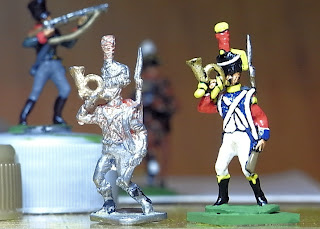 …is another man’s, er, lead mountain. Tony has just put up an interesting and thought provoking post over at Prometheus in Aspic on the topic of excess lead. Luckily for me his desire to have a bit of a clear out resulted in the arrival of this rather nice casting of FN86 French Light Infantry Voltigeur Bugler.

In the picture the new arrival is stood next to my existing painted example of the figure type. Tony makes the point that a large proportion of wargame figures never get to see the wet end of a paint brush, this chap on the other hand has been painted three times (click here for a reminder).

My thanks to Tony.
Posted by Stryker at 21:14 1 comment:
Labels: French 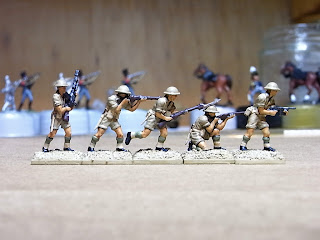 You’ve probably noticed the odd Desert Rat creeping into one or two of my pictures in the last few posts. To put an end to their rather unsubtle attempts to muscle in, I thought it best to post a proper picture of the completed infantry section.

The figures are Airfix ones from the WWII British 8th Army set, and I have to say that I’ve really enjoyed painting them. I’m also rather proud of my efforts to convert the advancing rifleman pose into an advancing bren-gunner (that’s the figure on the left of the line-up).

Next up on the Hinton Hunt front will be another personality figure followed shortly by some more Prussian Jagers.
Posted by Stryker at 21:10 2 comments:
Labels: Off Topic 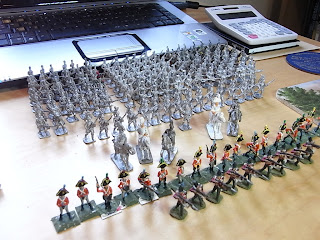 I’m not just referring to the snow. When we got back home from work yesterday there was a parcel waiting for me from Douglas. Now he told me he was going to send a few old 20mm soldiers that were lurking in his attic but I certainly wasn’t expecting this!

After a very enjoyable hour or so sorting through the castings it turns out that there are in excess of 150 Hinton Hunt figures – a mixture of vintage and Clayton ones. There are also some other types, possibly Minifigs S Range but I’m not so well up on identifying those.

It would seem that Napoleon is the biggest winner in this haul of new recruits, as he will gain another unit of French Fusiliers, a unit each of Line and Elite Voltigeurs, half a unit of Polish infantry and a unit of dismounted Dragoons. The Duke acquires another unit of Nassau Grenadiers (although their loyalty has been questionable of late), a Company of British Light Infantry and several Austrian Artillery crews.

All I can say is roll on my Birthday…
Posted by Stryker at 10:07 8 comments:
Labels: Waffle
Newer Posts Older Posts Home
Subscribe to: Posts (Atom)