I’ve now based up the French 24th ligne so they are officially complete and added to the French OOB. It’s been interesting how this unit has evolved as I didn’t have a clear idea of what figures to use when I started out but I’m happy with the result. 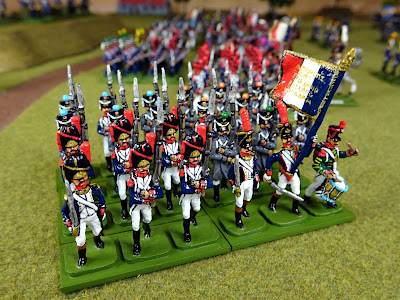 For once all the figures I used were vintage Hinton Hunt castings which after all is what this blog is supposed to be about. 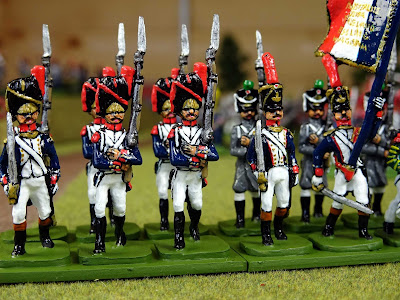 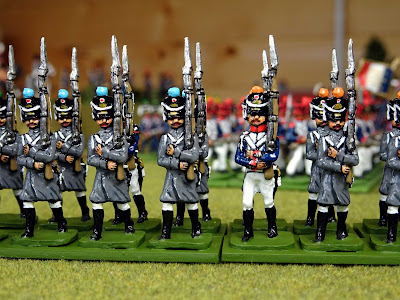 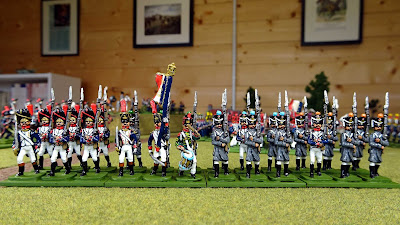 Having enjoyed painting the line grenadiers for this unit I’ve decided that next up will be my Old Guard marching figures that I’ve had in the lead pile for far too long.
Posted by Stryker at 17:33 22 comments:
Labels: French

In response to Matt’s suggestion on his Waterloo-to-Mons blog I am posting today about my favourite military commander in history, Union general George Brinton McClellan. 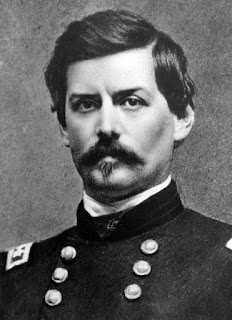 McClellan finished 2nd in his class of 59 at West Point, he served with distinction in the Mexican War and even visited the British siege lines at Sebastopol as an official observer. On paper he had the potential to be a brilliant general and upon being given command of the Union forces in the east in 1861 he was hailed as “The Young Napoleon”.

McClellan proved himself to be a great organiser and set about creating the Army of The Potomac virtually from scratch. In this he was hugely successful and, in the process, became very popular with the troops who would cheer with gusto as he rode along the lines during reviews. There was just one problem, McClellan didn’t like to fight.

That’s not to say that he was not personally brave but whenever he finally got his army in motion (usually only after much prodding from President Lincoln) he was slow and indecisive, always wrongly believing that he was greatly outnumbered by the enemy. On his first major campaign on the peninsula the Confederates referred to him disparagingly as “The Virginia creeper” because of the very slow progress made by the Union army towards Richmond.

That campaign did of course fail but McClellan thought he had carried off a spectacular fighting withdrawal against overwhelming odds and couldn’t understand why Lincoln (who he called “The Original Gorilla”) didn’t seem very impressed. Following Antietam, where he failed to capitalise on his victory by pursuing and destroying the Rebels, he was finally removed from command. 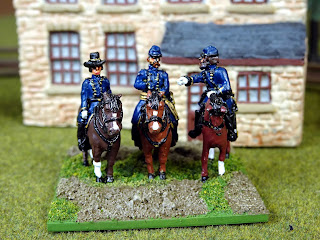 So why McClellan? I didn’t have to think twice about who my favourite commander is, it has always been McClellan since I first read about him some 35 years ago in Bruce Catton’s “Mr Lincoln’s Army”. I’m fascinated at how a person so theoretically suited to command of an army could turn out to be so bad at fighting with it.

I have played many ACW wargames over the years, but I always prefer to play McClellan over any other Union commander. The mixture of pompous incompetence and paranoia in the face of the enemy is something I am drawn to, not that I’m in any way like that myself as a commander of miniature armies of course.
Posted by Stryker at 20:16 18 comments:
Labels: Off Topic, Waffle 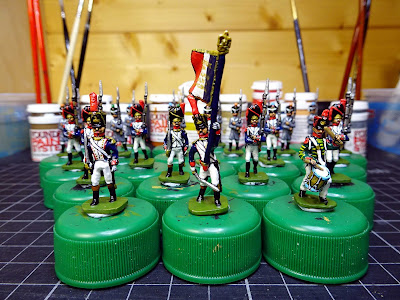 I’ve completed the command group for the 24th ligne. The officer is FN/8 Officer (marching) and this casting is one I’ve had in my possession since 2006 having been included in one of my first eBay purchases for this project, nice to give him his own regiment at last.

The colour-bearer (FN/4) is a vintage one recently donated to me by Tony. My stocks of original colour-bearer figures were almost exhausted and the reproduction ones I have are just not the same quality. I’m a great fan of the cast-on flags but I find painting the lettering a right fiddle, I am in awe of those of you who can whip up a masterpiece on a bit of coke can!

The drummer is FN/6 Drummer (charging), I’ve painted a few of these now and although I’m sure this is a vintage casting, he seems a little on the small size.

So that’s it, the unit is complete and just needs basing.
Posted by Stryker at 15:49 14 comments:
Labels: French 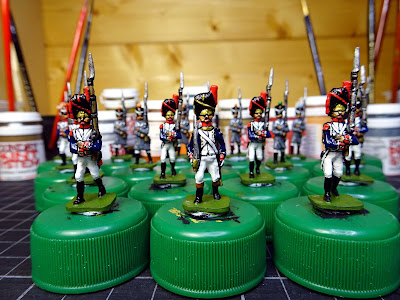 I’ve managed to finish the grenadiers for the 24th Line which just leaves the command figures to paint. The officer here is part of the grenadier company rather than the unit command, he is a lovely vintage casting of FN/236 French infantry of the line 1807/12, Grenadier Officer (marching).

I think that the Hinton Hunt French marching grenadier figures are amongst the finest of Marcus Hinton’s sculpts and it has started me thinking about the unit of Old Guard grenadiers that have been languishing in the lead pile far too long.

Hopefully I’ll get the remaining three figures for this unit completed in the next day or so.
Posted by Stryker at 19:18 18 comments:
Labels: French

I still had all the troops on the table from the playtest last week so thought I'd take a few snaps to lift the morale of any of you idling at home (like me). 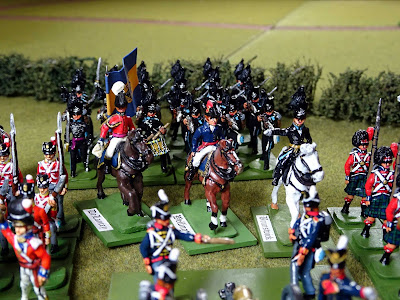 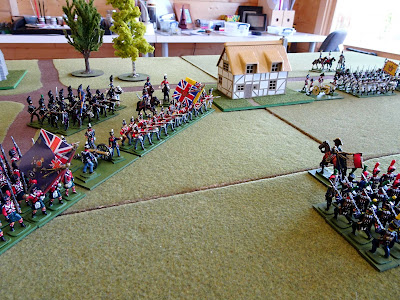 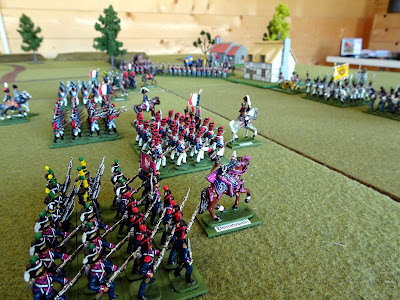 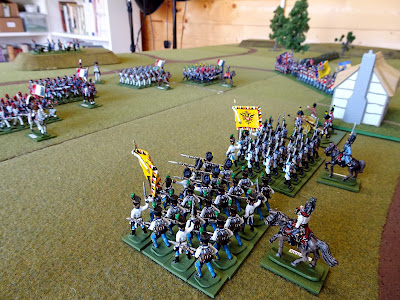 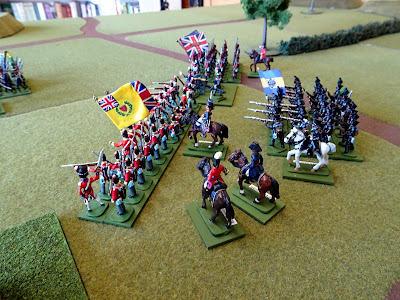 Chin up!
Posted by Stryker at 14:39 30 comments:
Labels: On Manoeuvres

A Grenadier and more rule playtesting

Not much painting progress recently other than this test-figure for the Grenadier company of the 24th line. The figure is FN/237 Grenadier (marching). 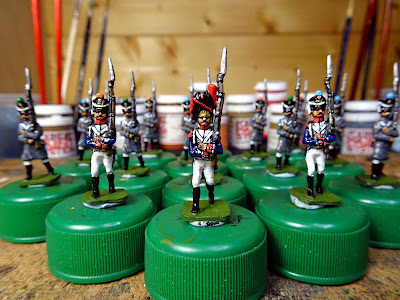 On Wednesday Goya came over to the Hut to help me with the continuing playtesting of the tweaks for my rules Muskets & Marshals. We ran through a couple of small scenarios that turned out to be surprisingly good fun to play.


For the record these are the amendments we tried out:

If a column declares a charge on a line and the line passes its morale test with good morale throw 1 x normal die:

I’m over the half-way point now for the 24th ligne with the addition of these two castings of FN/247 Fusilier (marching). This brings the total of painted figures in the unit to fifteen. I only had two of this particular figure type however I still wanted to use them, so it seemed like a good idea to mix them in with their less hardy brethren in great-coats. 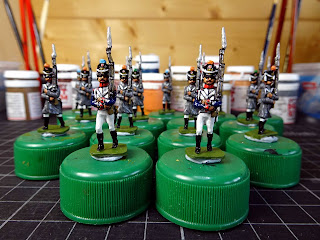 Last week I took part in an enjoyable ECW game at Tony’s where I joined him on team Royalist. Tony has posted a full battle report on his blog here so I’ve just included a couple of photos that illustrate the flavour of the day.


The result was a victory for the King's forces which to be fair went against the run of play - they was robbed!
Posted by Stryker at 17:18 12 comments:
Labels: ECW, French
Newer Posts Older Posts Home
Subscribe to: Posts (Atom)