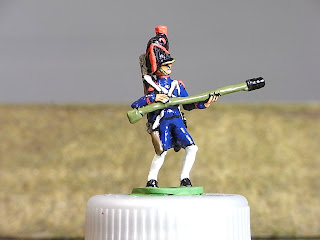 Just to prove that I do sometimes still paint my own figures I have spent the last week or so working on a French Imperial Guard Foot Artillery crew. My crews consist of four figures and the ones I have just completed are all lovely crisp old vintage castings.

Pictured here is FN/172 Gunner ramming home and I thought I’d give you a sneak preview before I base him up with his three colleagues ready for action. I have a genuine vintage Hinton Hunt French Field gun for the completed crew to serve and I’ll post on that in due course.

I followed the Hinton Hunt painting instructions for this figure as closely as I could and was intrigued to see that Marcus Hinton gives the collars and cuffs as blue piped in red. In every other source I’ve seen the Guard Artillery have solid red collars and cuffs but Mr Hinton knew a thing or two about military uniforms so I will stick with him on this one.

Thanks to Clive for supplying me with the HH painting instruction sheet.
Posted by Stryker at 19:53 4 comments:
Labels: Artillery, French, Guard

Bravest of the Brave 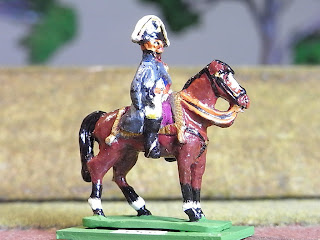 Michel Ney was a lowly Hussar Trooper before the Revolution and a Hussar Captain after it. He was very strong and very brave, with blue eyes and red hair and was a first class swordsman and horseman – sounds like he may well have been Captain of his school football team and popular with the girls too.

Ney was fiercely loyal to Napoleon (at least at first) and fought in countless actions including Jena, Eylau, Friedland, and Borodino and of course, Waterloo. He was among the original group of Marshals of the Empire created in 1804 and was later created Duke of Elchingen (1808) and finally Prince of Moskowa (1812). His handling of the French rear-guard during the retreat from Moscow is legendary and after the crossing of the Beresina his command was down to just 60 men but he was still fighting, musket in hand.

After the abdication Ney changed sides to the Bourbons, just as most of the other Marshals did in order to protect their lands and titles. It must have been a bit of a shock when Napoleon escaped from Elba and he famously promised to “bring the monster back in an iron cage” but I don’t think he ever meant it. After Waterloo he was arrested and tried by The Chamber of Peers where many of his old comrades turned their back on him and voted for the death penalty. He was executed by firing squad on 7th December 1815 and reputedly gave the order to “fire” himself.

The figure is FN/354 Marshal Ney with riding coat worn over his shoulders mounted on horse BNH/10. I acquired this casting already painted (see him here) and decided to refurbish rather than repaint – most of the work I did was on the horse, which has also been modified by the previous owner.
Posted by Stryker at 20:44 4 comments:
Labels: General Staff 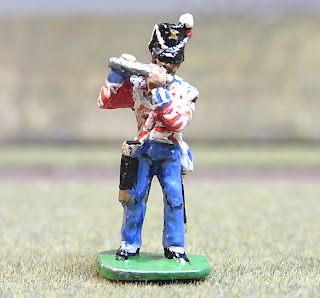 My thanks to Steve, who sent me this splendid little Hinton Hunt British Fifer BN/11 Fifer (playing). Steve noticed that my Guards had no Fifer in their ranks and sent this chap over to join them.

It’s a lovely crisp vintage casting and certainly deserves a place in the Guards. However, it does pose a bit of a problem as my units are 24 figures strong and to include him I will have to eject one of the existing ones from the ranks. Another solution may be to increase the size of the unit to 30 figures, after all Guard units were normally quite large. I will ponder that one.

I’ve been having quite a frustrating time with Blogger recently as it decided a few days ago to stop me posting pictures. I’ve finally found a work around so if anyone else has had the same thing happen let me know and I’ll tell you what I did.
Posted by Stryker at 10:26 3 comments:
Labels: British, Guest Appearance 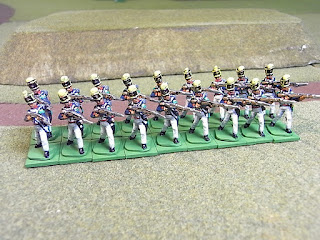 It has to be said that during the Battle of the Ridge, the elite Voltigeurs of the 10th Legere took a bit of a pasting at the hands of their opposite numbers the Tirolean Jagers. It’s fortunate therefore that the latest addition to my collection is another unit of Voltigeurs to bolster the French skirmish line.

These figures are actually Hinton Hunt Grenadiers FN/3 Grenadier (firing) painted as Voltigeurs as I have no genuine Voltigeurs. I think this is a good use of these particular figures, as I seem to have accumulated more Grenadier castings than I need for regular units. I have mentioned before that when I ordered French infantry direct from Hinton Hunt in the early 70s I asked for 72 Grenadier figures because I had no idea about unit organisation – perhaps I wasn’t alone in this which may be why a disproportionate number of Grenadiers are still in circulation.

The Hinton Hunt firing figure pose is quirky and quite unmistakeable with the soldier firing high and looking as if he’s struggling to keep his ‘tree trunk’ sized musket under control. The castings are almost certainly original ones but even so they vary quite a bit in quality – in particular many of the pom-poms are large blobs due to some malfunction in the casting process. These irregularities were common in the figures supplied by Marcus Hinton, which can sometimes make it harder than you might think to distinguish the genuine vintage item from the army of impostors around today.

These figures were painted for me by Matt.
Posted by Stryker at 18:09 No comments:
Labels: French

Those of you who read my last post will no doubt be keen to see some more photos of the latest unit to join the Allied order of battle. This is my generic unit of British Foot Guards that have been superbly painted for me by the talented Matt Golding. The figures used are actually line troops in shako from the 1812-15 range, with the exception of one Sergeant sporting a Guards bearskin. 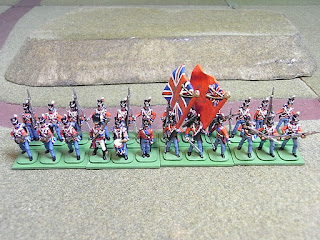 The British Guards in line formation

Hinton Hunt produced a whole range of Foot Guard figures wearing bearskins and for a long time I thought this was a mistake as I’d only ever seen pictures of them in shakos at the time of Waterloo. However, I should have know better as Marcus Hinton was an expert on military uniforms and I’ve subsequently found out that the Guards did have bearskins during the Napoleonic Wars - although they were not worn on active service. 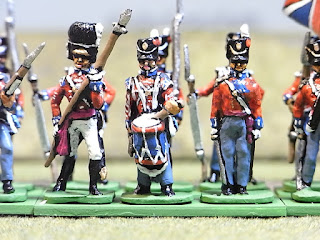 The drummer and officer above are actually from the American range by Der Kreigspieler but they are such good imitations of Hinton Hunt figures that I included them for variety. I didn’t have enough of any one figure type to do a full 24 figure unit in identical poses but I actually really like the finished effect of this mixed pose battalion. 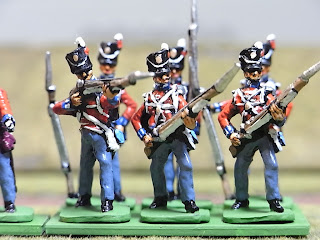 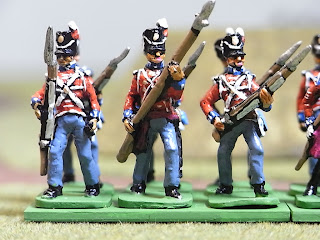 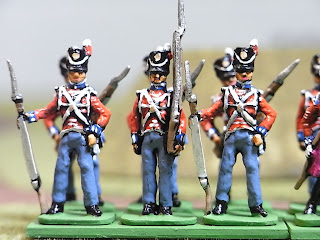 I really like the BN/3 figure in ‘casual’ pose and it’s the only one like it in the whole Hinton Hunt 20mm range as far as I know. Roy told me the other day that Marcus Hinton always produced his master from a basic dolly with arms out stretched and he would then bend the arms into position. Looking at this particular figure it’s very easy to see this. 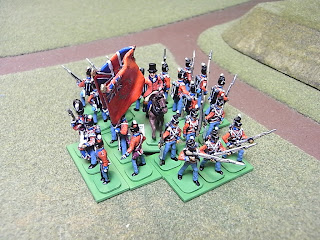 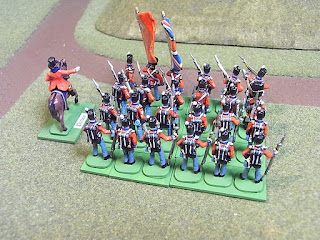 The Guards in column – from the rear

The British infantry range also includes colour bearers with cast-on flags, one with the King’s Colour and one with the Regimental Colour (although I believe these were reversed for the Guards). Matt has done a lovely job with these. 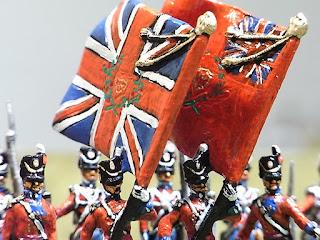 So finally the Duke has a unit he can really trust on the battlefield and they’ve already demonstrated this in their first engagement at the Battle of The Ridge – they fired two quite devastating volleys and lost not a single man in the action. However, the battle was another defeat for Wellington and I’m sure he will be expecting even greater things from the Guards next time.
Posted by Stryker at 19:00 5 comments:
Labels: British, Guard
Newer Posts Older Posts Home
Subscribe to: Posts (Atom)