The original Hinton Hunt figure range was poorly supplied with flag-bearer figures and back in the early 70s I was forced to attempt my first conversion to produce a Prussian one. This consisted of gluing a wobbly bit of unbent paperclip into the hands of an advancing figure (the one supplied without a musket) and attaching a hand painted paper flag to the staff. Not the most difficult of tasks you would think but in the days before super-glue or commercially produced flags I found it pretty challenging. Sadly I have no photo of that one but here is the result of my efforts over the last couple of nights. 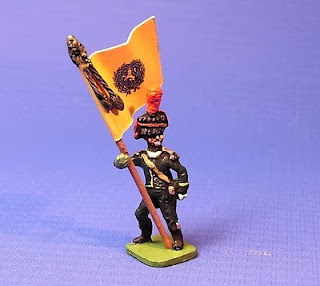 Figure painted by Matt Golding, flag by Revo, conversion by yours truly


The figure is a standard bearer for my Nassau Grenadiers converted from NN/3 Nassau Officer (charging). The conversion involved using some of the mysterious “green stuff” I have often seen mentioned on other blogs (who can forget the Black Adder “purest green” sketch? Click here if you have!). For the uninitiated Green Stuff is a two-pack putty that slowly hardens when mixed together and eventually dries rock hard. I used it to make the top bit to the flagstaff and the ends of the dangling cords. It was also used in bionic man fashion to reconstruct the hand that grips the flagstaff. 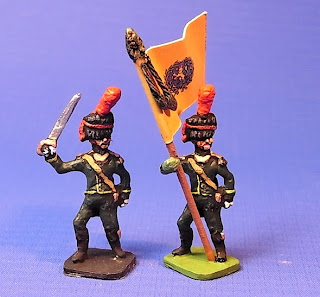 Before and after
I opted for a flag from Revo rather than try to make one myself. As far as I know Revo flags were the first proper commercially produced flags for wargamers so I feel they are appropriate for use in this project. The flags are printed on sticky backed paper and can be quite a fiddle to attached to the flagstaff properly but in this case I made a perfect job of it first time, perfect until I realised I had stuck the thing on upside down. It was quite a job to put it right but as you can see I did manage it in the end. 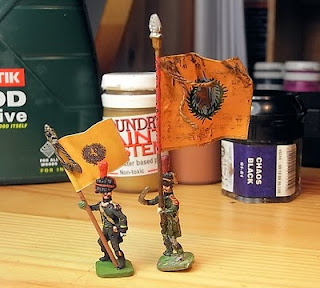 What a whopper
When I bought my Hinton Hunt Nassau figures a couple of years ago they came complete with a converted flag-bearer made by the original owner. Now I know that there is a school of thought that says that wargame flags need to be a bit over scale so that they show up on the wargame table – and I agree with this – but I think this example might be taking things to extremes!
Posted by Stryker at 20:22 9 comments:
Labels: Conversions, Nassau

I made a detour via the Royal Mail depot on the way home from work tonight to pick up a package containing the Nassau grenadiers Matt has painted for me. They are splendid indeed and this quick snap does not really do them justice. 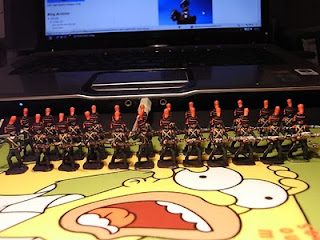 The uniform green looks quite dark in this shot but is less so in the flesh and will brighten up when I varnish and base them. That’s the next job then.
Posted by Stryker at 21:00 10 comments:
Labels: Nassau

That was the week that was

A bit of a manic week that began heavily weighted towards work then changed emphasis towards the consumption of red wine and finally culminated in a trip to Chichester for my son’s graduation. None of this is relevant to this blog of course but here are a few highlights that just might be:

Tuesday – FN361 General Nansouty arrived in the post. My first successful Hinton Hunt eBay purchase for a long time and a welcome arrival as it means I am only missing one French HH personality figure now – cool (as the young people and old hippies say). Nansouty will be at the back of a very long painting queue, probably looking over the shoulder of Massena trying to see what the hold up is. 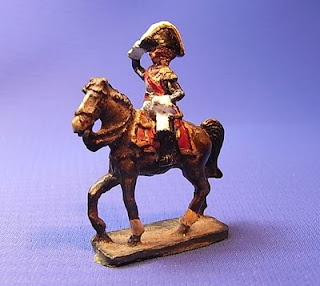 Tuesday (a few seconds after Nansouty’s arrival) – A copy of the Hinton Hunt export price list from 1972 arrived in the post from Don in the US. This list is almost identical to my UK list except that the prices don’t include VAT. Slightly strange as you would think that the export prices would be cheaper without the VAT. Click on the image to make it readable. 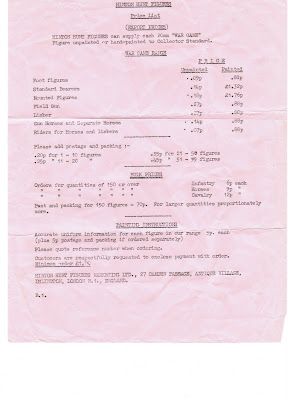 Thursday – Matt emailed me a picture of the completed Nassau grenadiers letting me know that they would be with me after the weekend. They look brilliant and I can’t wait for their arrival. Seems to be something of a Nassau theme running on some of my favourite blogs at the moment. 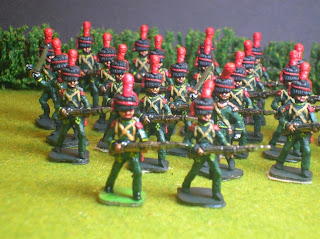 Saturday – Stopped off in Arundel on Friday night and went to visit the castle today. Quite amazed as I was expecting the usual sort of damp windswept ruin – had no idea it was still the fully functional residence for the Duke of Norfolk. We spent over three hours there and had a great time. I didn’t have my camera but the place is spectacular and well worth a visit - click here to take a look at the castle website.

That’s it then – the week is almost over. 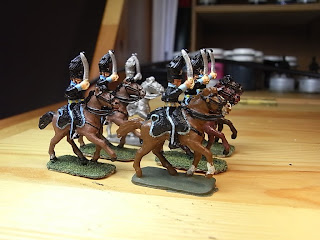 For some time I’ve had in my possession four Brunswick Hussars (BRN/17) but as I need six figures to make up a squadron they’ve been waiting patiently for reinforcements. Now as you can see I’ve finally managed to recruit the two missing troopers. This squadron has been assembled from the four corners of the earth (well the US, UK and Australia to be exact) and they’re just awaiting a bleach bath to remove the old paintwork before I repaint them.

I have a certain affection for these “Death’s Head Hussars” which I’m sure is shared by many other Napoleonic wargamers. Apparently Lady de Lancey compared the Corps to “an immense moving hearse” when she saw them on the march during the Waterloo campaign. The Hussars fought under the Duke of Brunswick at Quatre Bras where they gave a good account of themselves.

The other reason I like them of course is the ease of painting or at any rate the theoretical ease of painting – after all I could just splash them all over in black as the previous owners have done. However I think I should put a little bit more effort in so intend to use a dark grey for the uniform and then black on the straps for some contrast. Anyway, surely even I can paint these up relatively fast although of course I have to finish those French grenadiers first.
Posted by Stryker at 18:53 7 comments:
Labels: Brunswick, Light Cavalry

The cost of wargaming 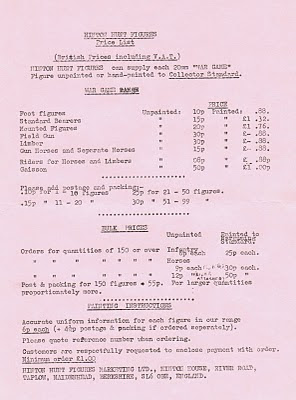 This is my remaining original copy of the Hinton Hunt price list and I think it dates from around 1973/74. I don’t know for sure as there is no date printed on it but that was about the last time I ordered any figures direct from Hinton Hunt so I’m probably right. If you click on the image it should become big enough to read properly.

Hinton Hunt Figures were never the cheapest option for building a wargame army and their mail order service was not particularly fast when compared to contemporaries like Minifigs. However to me they were the figures to have because they were the ones featured in Miniature Warfare magazine and the ones that Callan used. The problem was that you had to order over 150 figures to get the best price (6p infantry, 12p cavalry) and that was a lot of pocket money but it did make for an exciting package when they finally arrived.

The figures could also be bought ready painted (25p infantry, 50p cavalry) although that was way beyond my pocket as a kid but I dreamed of being able to order complete ready painted armies. Since then, having heard various tales about the quality of the paint job, I can see that perhaps I might have been disappointed on that score.
Posted by Stryker at 17:33 4 comments:
Labels: Waffle
Newer Posts Older Posts Home
Subscribe to: Posts (Atom)