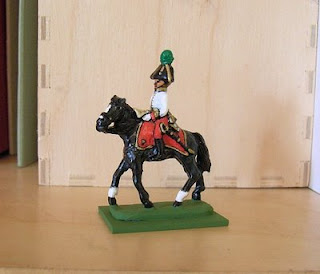 The encirclement and destruction of the Austrian Army at Ulm in 1805 has to be one of the high points of Napoleon’s career. Sadly for poor old General Mack it was his fate to be in charge of the 30,000 men that were forced to surrender there.

I have been fascinated by this incident since first seeing a painting of the surrender in a copy of “A History of Warfare” (by General Montgomery) in the late 1960’s. It shows a white-clad Austrian Officer slightly stooped, handing over his sword to the French while off to one side a Grenadier is trying to kick an unexploded shell away with his foot. The whole scene is crowded with an array of troops all in fantastic uniforms (this is from memory and I have no idea what the picture was).

So it seems fitting that this Hinton Hunt casting of an “Austrian General Mounted Holding Map” (AN102) should represent the unlucky General Mack trying to find some route out of his predicament. The figure is a vintage one that I stripped and repainted – to see how he looked before the uniform reissue click here.
Posted by Stryker at 19:12 10 comments:
Labels: Austrian, General Staff 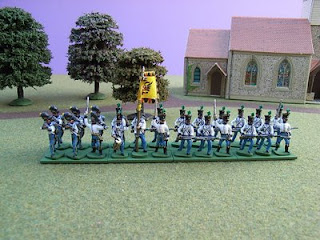 As you can see I have finally finished the Austrians and am pretty pleased with the result. I had never painted any Austrian infantry before and was a bit concerned that my black outlining on white was going to look too stark (besides giving me the model painters version of snow blindness). It was only when the whole unit was assembled that I felt I had achieved the required look.
The unit represents a Battalion of the Hungarian 51st Gabriel Spleny Regiment. I ended up using 16 vintage figures and 8 Clayton produced figures to complete them. The figures are as follows: 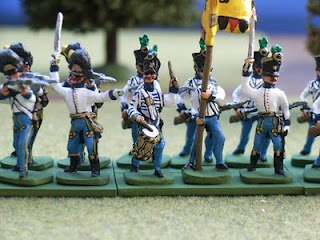 It was only as I painted them that I really began to see the differences between the Clayton figures and the vintage ones. The metal used in the Clayton castings is lighter and more bendy than the vintage ones and the figures are thinner. This suggests to me that the Clayton moulds may have been made from other figures rather than from the Hinton Hunt masters. This tends to fit in with the suggestion that many of the masters were destroyed in a fire before the HH range emigrated to the USA.

Next up I have some more Austrians but I’ll keep their identity a surprise for now.
Posted by Stryker at 16:36 6 comments:
Labels: Austrian 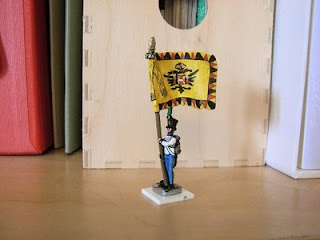 Well actually it’s an Austrian Line Infantry Colour Bearer AN9 but I thought that this models facial features and pose bore an uncanny resemblance to the members of the Trumpton Fire Brigade.

This is a bit of an odd figure because it was produced by David Clayton and was never part of the original Hinton Hunt range. I can see why Clayton wanted to add it as there was a distinct lack of standard-bearer figures made by Marcus Hinton. Only the British and French range had them included although the Prussian range had a figure cast with open arms and a separate musket that could easily be converted to carry a flag.

I decided to include this figure in my Hungarian Regiment because I really do think that you need a few flags to make a decent looking Napoleonic force. I also like the metal-cast flag that is in keeping with the retro nature of this project. The sculpting is a bit crude but I think he will blend in fine once in the ranks.

I was quite pleased with my freehand flag painting when viewed from a distance but please don’t zoom in too close on the image.
Posted by Stryker at 10:33 7 comments:
Labels: Austrian, David Clayton Figures 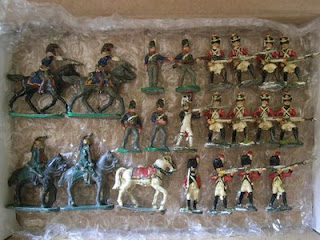 I did say a couple of posts back that I had stopped buying figures as I have far more than I could ever paint. Well, thanks to Mark and his offer of vintage figures, I am pleased to announce that another 50+ Hintons have made it into the fold. I couldn’t resist these as they came with a pedigree – Mark bought them in person from the Hinton Hunt shop in Camden Passage in the early 1970’s. I visited the shop myself around 1974 but they only had the larger collectors figures on display at the time so I came home with a 54mm Caledonian Warrior – not very satisfactory.

Receiving a batch of vintage figures is the height of geeky excitement for me as I never know quite what I’m getting and this lot did not disappoint. Many of the figures still had big chunks of flash metal attached – HH figures were notorious for the amount of flash they came with but now instead of being annoying it’s actually endearing to see! My favourite figures to arrive were four British Dragoons that had been painted as French Dragoons. The code number under the base (BN40) is the lowest for any of the HH British cavalry so I guess it must have been one of the first figures issued. They are certainly very crude in comparison to later castings but I think they’re great. These lads will eventually join my Scots Grey’s in the Union Brigade.

Another gem included were twenty of FN244 French Fusilier Charging. This figure is listed in the Hinton Hunt catalogue as a Fusilier for the period 1807/12 and will give me a second unit of Fusiliers to go with my Battalion of the 45th. Mark had painted these as Swiss Infantry and added in nine Old Guard Grenadiers in the firing position (FN23) to go along with them. As I have mentioned before, finding French Line Infantry figures has proved surprisingly hard so I am very pleased to have these.