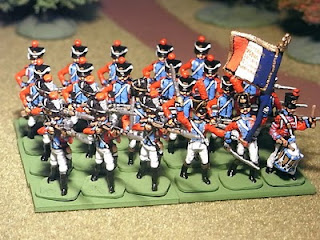 The 4th Swiss regiment was formed in 1806 and quickly proved themselves to be determined fighters. At the crossing of the Beresina they fought until their ammunition was expended and then charged home with the bayonet. They continued to play a prominent part in the French rearguard during the retreat from Moscow where they “outdid nature, and spread a radiance of heroism into the desert of snow.” What’s more they were dressed in lovely red uniforms which gives a French player the chance to field his own redcoats on the tabletop.

So how did I manage to achieve such a prodigious painting output since my last post? Well, I must tell the truth – these splendid chaps were painted for me by the very talented Matt Golding of In the Grand Manner fame. Matt has done a superb job and went to great lengths to try and emulate my painting style, which must have been quite difficult as it involved (and no offence is meant here Matt) a degree of dumbing down from his normal shading style. The figures are:

You may remember that the original owner of these French figures had also painted them as Swiss and I thought it would be nice to keep them as the same nationality. All the figures are vintage Hinton Hunt that had their old paintwork stripped and the flash removed by me – there was a lot of flash on these ones and it reminded me of carrying out this same task years ago. Back then I had just a couple of files “borrowed” from my dad’s tool kit and I would file away for hours until my fingers were almost bleeding – such dedication to my hobby.

I’m not sure how readers of this blog will take to me subcontracting my work like this. It could be taken a bit like one of those episodes of Come Dine With Me where the contestants get in a professional chef to secretly cook for them but at least I’m not trying to pass this off as my own work. The thing is its been a real boost to my morale to have Matt’s help in what is otherwise proving to be a frustrating year on the painting front.
Posted by Stryker at 10:35 6 comments:
Labels: French 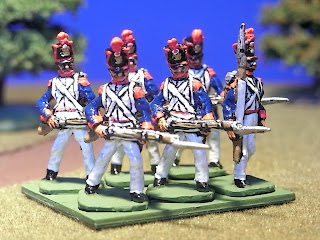 This is the battle-hardened grenadier company of the 45th regiment of the line. Who knows what adventures they have had on Spanish plains, Russian steppes and Flanders fields? On the other hand they may have been nowhere much at all but they are at least guaranteed a tour of duty in my display cabinet.

I’m actually pretty pleased with them even though they have taken an extraordinarily long time to complete. The figures are all vintage Hinton Hunt ones that I stripped, de-flashed and repainted. To recap they are:

I am now ridiculously behind on my painting schedule for this year due to our house move (with all the accompanying DIY) and the fact that after a couple of relatively leisurely years the world of work seems to have crept up on me again. I do however have a secret weapon that I hope to deploy shortly in an effort to get this project back on track.
Posted by Stryker at 20:27 7 comments:
Labels: French

Rebellion in the colonies (Off Topic #15)

To commemorate the sad loss of the American colonies in 1783 we took a trip up to the American Museum in Bath today to see some re-enactors in action. The 5th Foot were going through their musket drill on the lawn whilst sprightly riflemen pepper-potted to the fore. We were also treated to a stirring rendition of The British Grenadiers played out on the fife and drum. 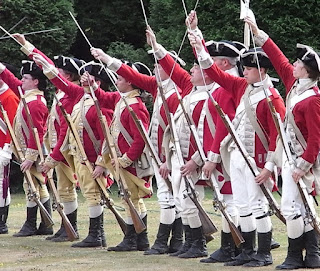 Next, while Mrs S and I sipped cool ginger beer on the terrace, the artillery sprang into action. There was an interesting and informative commentary over the PA followed by a very loud bang that left my ears ringing – I remembered to insert my fingers firmly in my ears for the second bang. The whole display was very well done even though it involved no more than 30 or so re-enactors. Very cleverly though the re-enactors didn’t bring any Americans along to spoil their fun. If only it had been this way during the real war the Union flag might now be fluttering over Capitol Hill. 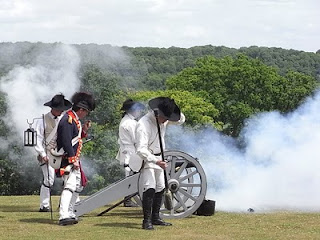 When we were in New York earlier this year we took a boat trip around Manhattan. I asked the very enthusiastic tour guide if he could point out the site of the Battle of New York. He not only did this but very helpfully pointed out the route that the British troops took during the build up to the battle as well. He made it pretty clear though that as an American he was pleased with the final outcome of the war. Fair enough.

The display is on again tomorrow on the 4th of July. Happy Independence Day to my American readers.
Posted by Stryker at 17:42 3 comments:
Labels: Off Topic
Newer Posts Older Posts Home
Subscribe to: Posts (Atom)