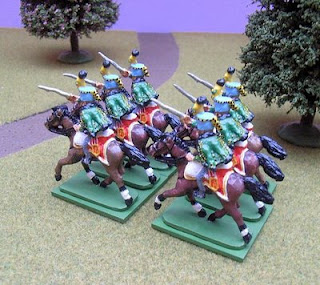 These are more of the Austrian cavalry figures sent to me by Don from the USA. I have given them the same treatment as I did with the squadron of the 6th Blankenstein Regiment. I have re-touched the paintwork where it was needed and painted socks on the legs of the horses to hide the bits of paint I accidentally chipped whilst scraping away the old flock from their bases. The figures have been painted to represent troopers of the 4th Vecsey Regiment.

I am 99% sure that all six of these figures are vintage Hinton Hunt castings of AN81 Austrian Hussar (mounted charging). It’s possible that they are Clayton produced castings but I think this is unlikely given the provenance of the figures. I was unsure about two of the castings in my other squadron and I now believe those to be DK (Der Kreigspieler). DK was a USA maker many of whose figures bore an uncanny resemblance to those of Hinton Hunt.

Those of you who have read back through this blog will know that the objective of this project was to collect and re-paint enough vintage Hinton Hunt castings to create two wargame armies. I have already digressed in a couple of areas by including some pirated figures as well as the more recent Clayton produced ones. To this I must now admit to the odd DK interloper and of course the fact that I have not stripped and re-painted Don’s figures. The thing is that I now have so many unpainted (or poorly painted) castings awaiting attention that it does seem crazy to strip and re-paint figures that are already finished in a style that blends in with my own. So the new rule is – if it ain’t broke don’t fix it!
Posted by Stryker at 19:54 7 comments:
Labels: Austrian, Light Cavalry 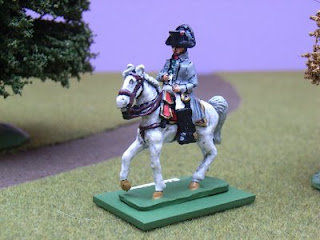 To many living at the time, Napoleon Bonaparte was a bogey-man or monster while of course to others he was an almost god like figure to be revered. For an armchair general like myself looking back 200 years later he was a general who should always give you at least +2 on any die roll you throw if you have his figure on the table.

This is a vintage Hinton Hunt casting of FN350 Napoleon mounted on FNH10 general’s horse. The figure is one that I have stripped and re-painted. It’s not a particularly inspiring bit of sculpture but then I guess the old ‘hand in the coat’ pose is what one expects of the Emperor. The horse has been painted to represent Napoleon’s famous white Arab stallion Marengo.
Like many wargamers I’ve always had a hankering to play the part of Napoleon. I did once get the chance to do this many years ago in a mega-game put on by the Soham Wargames Group but it didn’t quite live up to expectations. For a start nobody seemed to obey my orders (and I thought they were pretty darn good) and secondly I didn’t feel I was getting the respect due of an Emperor – “send us the Imperial Guard now you w***er!” is not quite how I imagined His Imperial Majesty would have been addressed by his Marshals. I can’t remember who won that battle but I have a feeling it wasn’t the French.

I hope to get the chance to play the role again one day and regularly practise the correct stance in front of the mirror.
Posted by Stryker at 10:49 10 comments:
Labels: French, General Staff 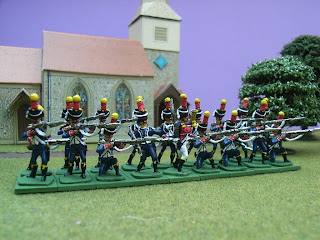 Here is the completed unit of French Voltigeurs representing the 10th Regiment D’Infanterie Legere – finished only three weeks behind schedule. My Light Infantry units are made up of 18 figures all individually based because I like my skirmishers to look like skirmishers. In reality of course the 10th Legere would have been comprised of just one company of Voltigeurs plus one of Carabiniers with the remainder being Chasseurs. Mine are all Voltigeurs because I like the snazzy colpack-busbies.

All the figures I used were Clayton produced Hinton Hunt ones with the exception of the Cornet that is probably a vintage figure. The Cornet/Bugler is painted as a member of the 50th Regiment using the original Hinton Hunt painting instruction sheet. I’m assuming the uniform would have been the same for the 10th but if anyone knows differently please don’t tell me. The unit is made up as follows: 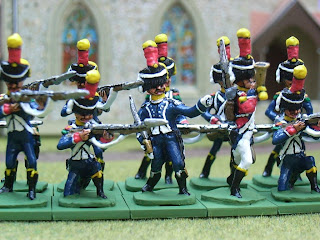 At the moment the Voltigeurs only have a few Austrian Jagers to pop away at but eventually they will have some chosen men in rifle green to contend with.

Next up will be the great man himself.
Posted by Stryker at 15:34 10 comments:
Labels: French

The Emperor and the Duke – Conclusion (Off Topic #7) 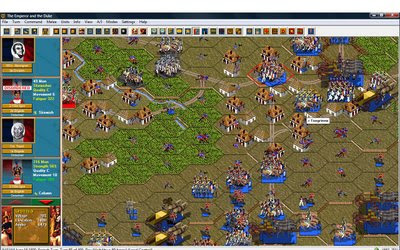 Regular readers of this blog may recall my post a couple of months ago about the play-by-email campaign of Waterloo I was engaged in using the game by HPS Simulations. I feel it’s only fair to report that Napoleon (that’s me) failed dismally in his attempt to crush the Allies and march on Brussels.

Following the battle at Gosselies I decided to move in the general direction of Ligny (sounds familiar eh?) preferring to fight it out with the Prussians rather than to get drawn in against those nasty redcoats. A protracted and costly running skirmish ensued culminating in a set piece battle at Tongrinne (just east of Ligny). Sadly, being unable to break the Prussian line and with the Duke of Wellington snapping at his heels, the Emperor decided enough was enough and booked a holiday on St Helena.

It was a great game that ran to 85 turns (representing about a day and half in real time). The picture shows my army disintegrating under the onslaught of the Allied troops – click on the image for a closer look. What these HPS games lack in graphics is more than made up for in the detail and sheer scale of operations and they are hugely enjoyable to play against a live opponent (not so good against the computer).

Having had a short break from hostilities to recover, my opponent and I have just embarked on an ACW scenario using the Antietam game. I’m playing Union General Pope in this one and am about to slug it out with a certain Thomas Jackson near a little stream called Bull Run.
Posted by Stryker at 14:06 3 comments:
Labels: Off Topic 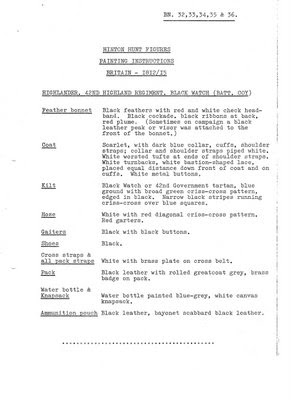 This is a re-posting of a post I wrote back in 2007 that I ended up deleting from the blog a few weeks ago due to a little technical hiccup. I thought it was topical in light of the recent saga of my Voltigeurs and the addition to Clive’s Hinton Hunter of some other examples of Hinton Hunt Figures painting instruction sheets. Anyway this was my original post:

When I started painting model soldiers I didn’t have much in the way of uniform reference books. There were no Ospreys or Blandfords and virtually all my information came from the pictures on Airfix soldier boxes. This was fine if you wanted to paint Union or Confederate forces or perhaps the Sheriff of Nottingham’s men but not a lot of use for Napoleonics (Airfix didn’t release their Waterloo figures until the 1970’s).

One great advantage to buying Hinton Hunt figures was that you could also buy a painting instruction sheet for each figure type (5p). This was just a typed sheet with no illustrations but it was invaluable if you wanted your figures to look anything like authentic. The image on the left shows instructions for painting a highlander from the 42nd Black Watch regiment BN32-36 (click on the picture for a closer look).

My parents bought me my first Blandford uniform book in 1971 entitled “Military Uniforms of the World”. I loved this book and still have it but it didn’t cover each period in enough depth to be really useful. Quite good though if you wanted to paint up an Austrian Feld-Jager rifleman from the Second Schleswig War!

In retrospect my comment alluding to the Schleswig War as being somewhat obscure just shows up my ignorance of military history. I assumed that nobody would ever wargame that particular encounter but just take a look at the splendid figures on Matt’s Waterloo to Mons blog (whilst there hop over to Matt’s other blog In the Grand Manner to see his Napoleonic Hinchcliffe project taking shape).
Posted by Stryker at 18:58 3 comments:
Labels: Waffle 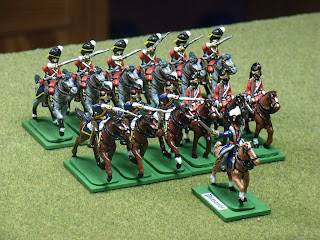 Here are some shots of my Union Brigade taken during the recent troop review. This unit is my current favourite due to the rather pleasing splash of colour it makes when set out on the table. It’s not strictly speaking historically correct but it does consist of English (The Blues), Scottish (The Grey’s) and Irish (The Inniskillings) elements combined under the famous General Ponsonby.

I was very interested to read some of the comments re the film Waterloo left on my Sir William Ponsonby post. The film had a great influence on me back in 1970 when it came out, prompting me to go and buy loads of boxes of the Airfix British and French figures that were being released at about the same time. I knew there was no way I was going to be able to paint them all so I left them in bare plastic and mounted them on balsa wood bases painted red (for the British) or blue (for the French). They sidelined my Hinton’s for a while and took part in several battles including Waterloo played out on my bedroom floor. 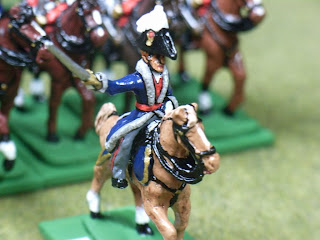 Tony’s comment that the scene in the film of the French cavalry charge had to be shot three times is fascinating. I always wondered why the film makers never bothered to find a piece of ground that resembled an actual ridge but if they’d already had to move everyone twice before it makes sense. It was a great film though and nothing like it is ever likely to be made again using live extras – computer generated soldiers will always do just what the Director says. If you look at the amazing battle effects in films like Prince Caspian (one of my Christmas acquisitions) or Gods & Generals the next generation of historical war films should be well worth watching!
Posted by Stryker at 17:37 11 comments:
Labels: British, Heavy Cavalry, Scots
Newer Posts Older Posts Home
Subscribe to: Posts (Atom)