Originally part of the Consular Guard, Napoleon incorporated the sailors’ battalion into the Imperial Guard on becoming emperor in 1804. At that time the battalion consisted of 5 crews totalling 818 officers and men with each crew commanded by a ‘capitaine de fregate’. 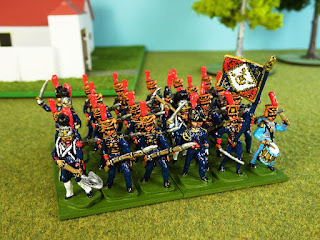 Their first assignment was to join the force at Boulogne earmarked for the invasion of Britain but when this was called off they travelled to Austria where they were present at Ulm and Austerlitz. The battalion subsequently fought at Jena, Eylau and Friedland during the campaigns of 1806-1807. 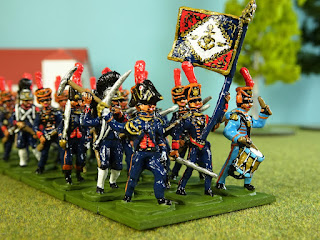 After Tilsit they were sent to Spain where they suffered heavy losses at Bailen, with many becoming prisoners. Because of this the unit had to be rebuilt from scratch in 1809 but with only a single crew of 150 men who fought at Wagram as gunners. 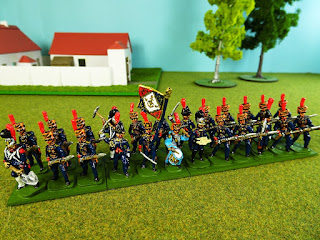 In 1810 more crews were added and the battalion rose to a strength of over 1,000 in time to take part in the invasion of Russia. Only 85 of its officers and men returned to Germany following the campaign but it was brought up to strength again in time to fight at Leipzig alongside the Young Guard. 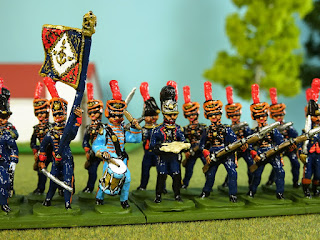 A small detachment of sailors accompanied the emperor in exile to Elba and during the Hundred Days one crew of 150 was re-formed and fought at both Ligny and Waterloo. The unit was disbanded in August 1815. 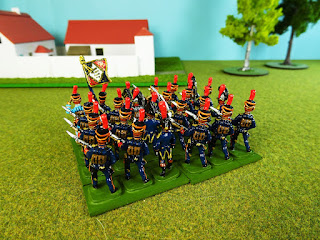 My own unit of Marins has a few Engineers of the Guard mixed in the ranks in recognition of the combined attack these units made at Ligny (and to give me an excuse to paint up some engineers). The unit is comprised as follows:

I’m hopeful that this unit will be seeing action quite soon.
Posted by Stryker at 19:47 18 comments:
Labels: French, Guard, Marine

Last of the Marines (and engineers) 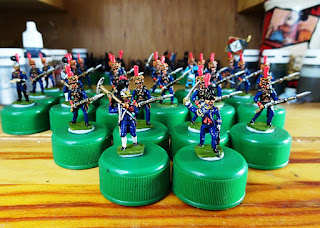 After a bit of a dry painting period I finally found time to paint the last few of my Sailors of the Guard. Shown here in the front are, FN/177 Guard using pickaxe (donated by Roy) and FN/90 Marine Officer, charging (donated by Mark). All that remains to do now is base them all.

When I started this unit a couple of years ago I was quickly distracted after painting just 3 figures and this is partly because most of the figures are reproductions rather than vintage figures. However in the end this has turned out to be an interesting unit to put together incorporating engineers and various command figures. The blue and orange uniforms also seem to come alive once the gloss varnish is applied.

Next I’m going to be painting a couple more French gun batteries and then it will be time to expand the Guard cavalry.
Posted by Stryker at 15:31 18 comments:
Labels: French, Guard, Marine
Newer Posts Older Posts Home
Subscribe to: Posts (Atom)