The Battle of The Ridge

Roy came over yesterday to help me try out some rule amendments to my house rules “Muskets & Marshals”. The amendments included some fairly substantial changes and it was really useful to have the feedback of a real opponent rather than just trying them out solo.

The scenario was simple – the Allies were holding a vital ridge and the French had to push them off it. Roy chose the Allies so I was forced to dust off Napoleon’s hat once again and command a mixed force of French, Nassauers and Swedes. Just about all my troops were on the table (including a new unit not yet seen on this blog) plus a couple of very nice French foot batteries from Roy’s collection. Here’s a summary of events: 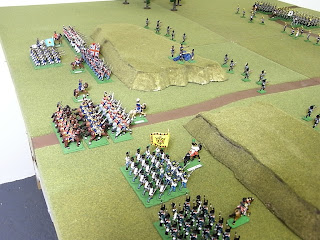 The Allies prepare to receive the French onslaught. That sneaky fox Wellington chose to keep most of his men safe from the French guns by hiding them behind the ridge (can you spot the new addition to the Allied Order of Battle?). 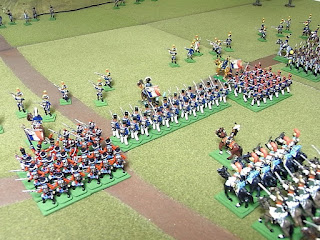 The French columns looking solid and unstoppable prepare to advance towards the ridge. 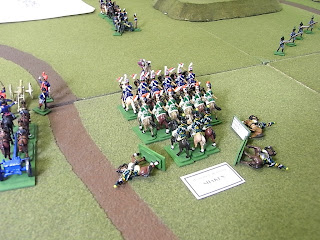 On the French left flank the light cavalry and horse artillery of both sides engaged in a cat and mouse game with the Allies initially withdrawing rather than charging. Here we can see Mercer giving the French a bit of a bloody nose. 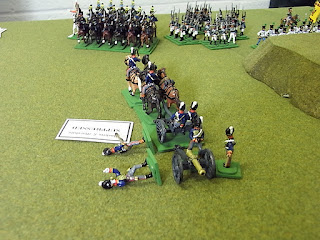 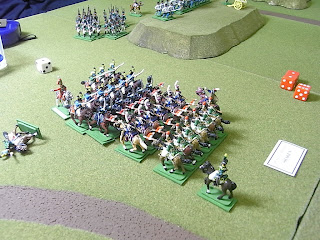 Finally we did get a proper cavalry melee and (rather nicely) it ended in rout for the Allies. 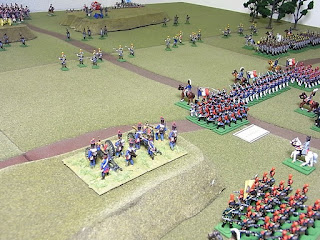 Meanwhile Napoleon ordered the Swedes on the far right of his line to start to advance. 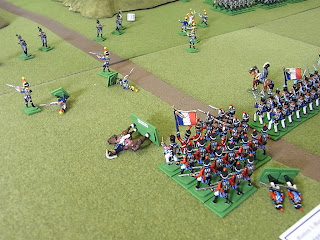 The Allied artillery and skirmishers scored some early successes - the Swiss in particular seemed to take more than their fair share of hits including Marshal Lannes who was leading them. Lannes became one of an unusually large number of fallen leaders during this game. 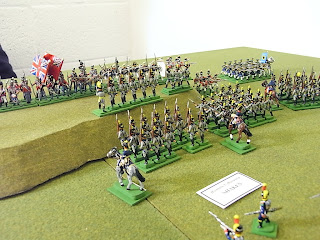 Eventually the Swedes reached the foot of the ridge and attempted to charge. They did exceptionally well considering they were all classed as 3rd rate troops and even caused the Naval battalion to give ground. 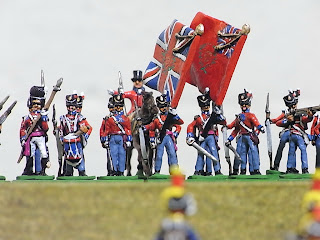 The British Foots Guards were however a different kettle of fish and remained firmly planted on the ridge. They ended the game as the only infantry still at full strength – a fitting result on their first outing. 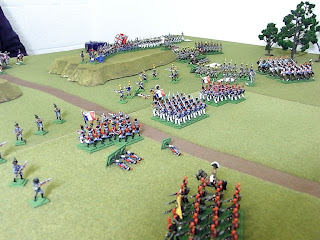 By now, although some of the Swedes had been routed, the Allied position was looking seriously threaten as the remainder of the French army pushed forward. 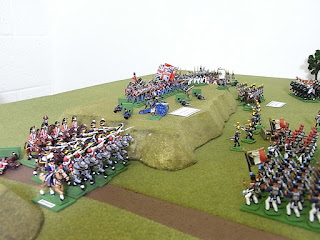 Wellington now ordered Ponsonby to charge with the Union Brigade and disrupt the French advance. By one of those strange fortunes of war the Scots Grey’s found themselves facing none other than the 45th Ligne – and the latter had no time to form square 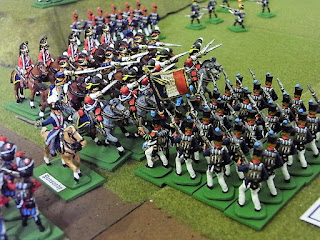 The troopers thundered forward and a fierce fight was fought for possession of the 45th’s Eagle. 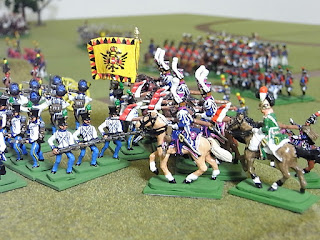 Meanwhile on the left, Poniatowksi charged with what remained of the French light cavalry onto the ridge, the lancers coming up against an Austrian square.

At this point we ran out of time but both agreed that the French were the most likely to win the battle if we had played on further.

The game was great fun but it was obvious that the rules need more work, particularly on the Melee and Morale sections. In the last turn we had a number of bizarre melee outcomes and my plan is to simplify things to help eliminate these anomalies in the future. It’s also important to make sure that we can play a game to a satisfying conclusion in a three-hour time slot, which is about the usual time we have available to play. 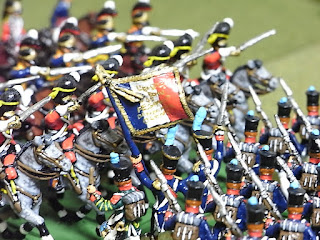 My thanks to Roy for another superb and entertaining game, and NO the Scots Grey’s didn’t take the Eagle of the 45th!
Posted by Stryker at 18:49 11 comments:
Labels: Battle of the Ridge, Playing Soldiers 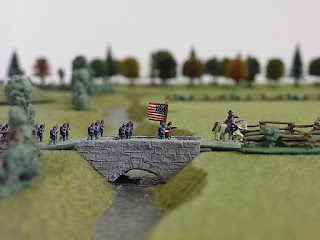 Over twenty years ago my brother and I decided to sell off our 15mm ACW armies and replace them with Ros & Heroics 1/300th figures. The thinking behind this was that with the limited playing space we had it would be the only way to play big Corps level games and at the same time do away with unrealistic ‘table edge’ flanks.

So Grant and Lee went micro, collected and painted around 2,000 figures, based 100 or so trees, produced a small City’s worth of buildings and painted several miles of snake fencing. The end result was very pleasing both visually and in the way the games played out with our house rules “Brother Against Brother” (named long before the commercial set of the same name!).

After a break of twelve or so years we played a game with these figures last week and true to form the Yanks (that’s me) lost. The battle was a hypothetical one based loosely on 2nd Manassas and the course of events was recorded in pictures (click here) by a Harper's Weekly artist. Remember when you look at the pictures that the infantry figures stand just 6mm tall and the battle flags are only 5mm square – each one painted without the aid of glasses - sadly now we can’t even see the figures without artificial aids let alone paint them!
Posted by Stryker at 09:24 7 comments:
Labels: Off Topic

The Battle of The Farm – Part Three

The Allied infantry columns were steadily closing with the French line to the right of The Farm but they were losing casualties in the process from the incessant skirmisher fire and the Austrian artillery (seconded for the day to the French army). 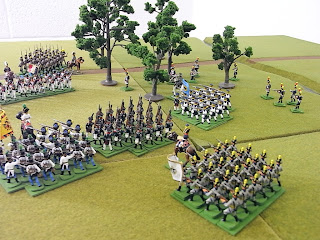 The Allied columns close with the French

Meanwhile, over at the Farm Napoleon moved to counter the Allied advance against the buildings by ordering the 4th Swiss into the vegetable garden to support the remaining skirmishers there. 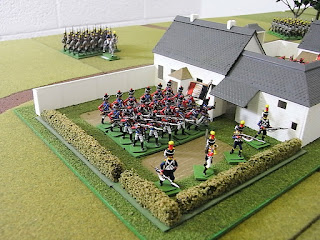 On the far left the French cavalry had by now reformed after their earlier success and were preparing to turn the Allied left flank. 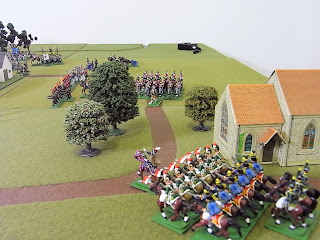 In response The Duke ordered Ponsonby to counter them with the Union Brigade, this time the Allied troopers held their ground and won the first round of melee. 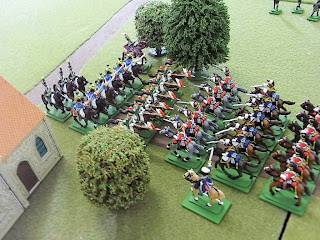 Ponsonby charges the French light cavalry with the Union Brigade

By now the Allied infantry columns had advanced to within musket range of the French and the decisive moment of the battle arrived as the 45th Ligne raised their muskets to fire. 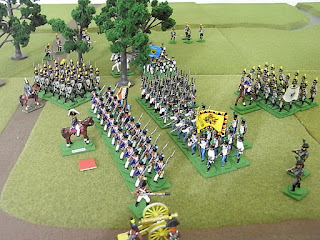 The 45th Ligne prepare to fire

The volley rang out and immediately the Splendid Splenys turned tail and ran leaving their comrades the Russians shaken and alone to face the 45th. At the same moment in the centre the Nassauer’s also took to their heels, only Blucher and the Silesian Landwehr showed much fighting spirit but it was all too late. 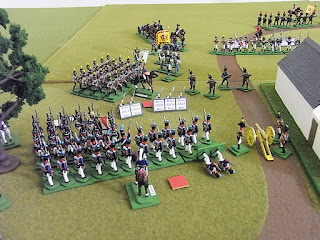 The Duke ordered a general withdrawal and had to beat a hasty retreat on Copenhagen to avoid being swept up in the rout. 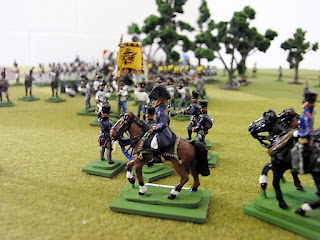 France Two, England Nil, the war was not going well for the Allies...
Posted by Stryker at 19:32 6 comments:
Labels: Battle of the Farm, Playing Soldiers

The 1st Chevau-Legers-Lanciers of the Guard (The Polish Lancers) were formed in 1809. They served in many campaigns and distinguished themselves particularly at Wagram and in Spain. Some of them accompanied Napoleon in exile to Elba, returning to take part in the ‘Hundred Days’ as part of the Combined Guard Lancer regiment.

These figures are all vintage Hinton Hunt castings made up as follows:

They have all been painted by myself (something of a rarity theses days) and represent the 1st Squadron of the Combined Lancers as they may have appeared on the field of Ligny. 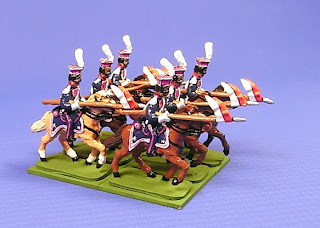 I found painting these figures a frustrating experience, mainly because I’ve had such little time to devote to them but also because the detail on these one-piece castings can be so tricky to follow (or should I say ‘invent’). Just to remind you – this is how they looked before I started on them.
Posted by Stryker at 13:46 4 comments:
Labels: Guard, Light Cavalry, Polish
Newer Posts Older Posts Home
Subscribe to: Posts (Atom)