The Sunday before last I was invited over to Roy’s house to play soldiers. Roy has a dedicated wargame room with a table 5’ x 12’, he also has thousands of 20mm figures spanning all periods. At the core of his collection are his Napoleonic Hinton Hunt figures and it was a real pleasure to see them en-masse. 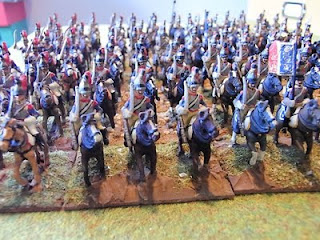 Hinton Hunt Cuirassiers – I stopped counting at 96! Not all used in the game but what a stirring sight.
I knew that Roy had planned a small game so I brought Napoleon and Bernadotte along with me however I was a little surprised to hear that we would be using my own Rules Muskets & Marshals to fight the battle. Rather embarrassingly it transpired that Roy knew the rules far better than I did. 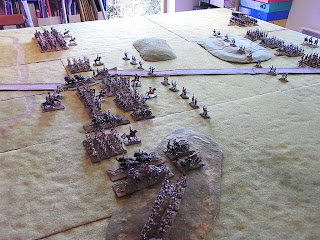 To aid deployment Roy has a large roller-blind on the ceiling that he pulled down along the centre line of the table so that both of us could lay our troops out in secret. When the blind went up I could see that Roy had refused his left flank and massed his cavalry on his right an exact mirror of my own deployment! In the centre he had massed infantry columns aimed at a small ridge near the middle of the battlefield. 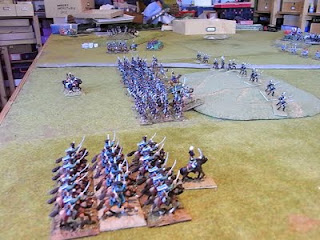 The game commenced with an artillery barrage from the Russian grand battery aimed initially against the French infantry. The French replied with counter battery fire against the Russians which proved quite effective and eventually knocked out one gun completely. 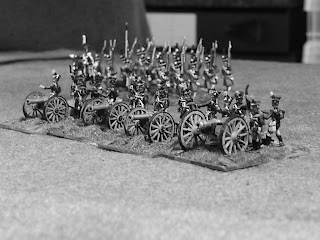 The Russian Grand Battery – the gunners are all Hinton Hunt.

Whilst the Russian infantry moved forward towards the ridge, the cavalry of both sides charged each other. My Cuirassiers succeeded in routing the enemy to their front whilst my Guard Lancers suffered the indignity of being routed by Roy’s Russian Hussars in return. 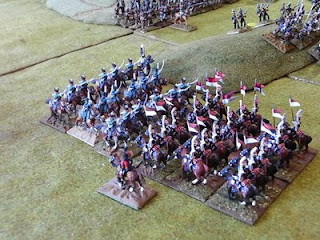 The Polish Lancers and Russian Hussars get to grips.

Meanwhile Napoleon responded to the advance of the enemy infantry by ordering the Guard de Paris forward to hold the ridge. 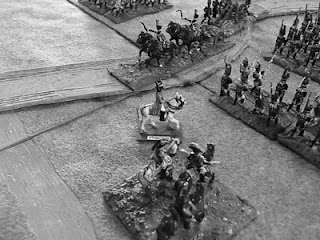 The skirmishers of both sides were heavily engaged all along the line but the Russians had the better of things and the French Voltigeurs were forced back. Finally a Russian column was in position to charge the Guard de Paris on the ridge. 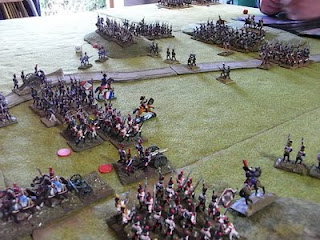 The Russians attack the Guard de Paris on the ridge (in the distance) while the rest of the French army look on.

The Emperor rushed forward to steady the line (and add his +1 to morale) but unfortunately this was not quite enough and the French broke and fled! 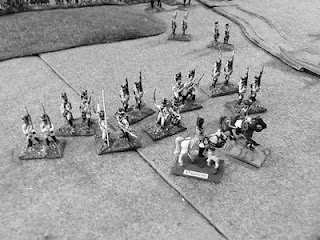 The Emperor caught up in the rapid “redeployment to the rear” of the Guard de Paris.

The Russians now moved forward to occupy the ridge and jeer at the unfortunate Frenchmen – victory was theirs. 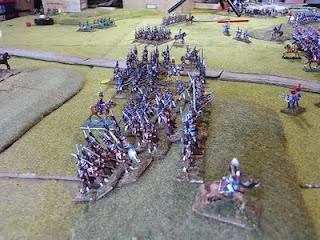 The Russians take the ridge.

At this point we ran out of time and had to end the game. Although we only played three turns there was a surprising amount of action and what looked like a convincing Russian win. It was certainly helpful for me to play through Muskets & Marshals against another player rather than solo as I have done before, and the game highlighted a few anomalies that will require some rule tweaking - notably the complete absence of any pursuit rules.

Such was the indecent haste with which the French quit the field that both the Emperor and Bernadotte became prisoners (I was half way home before I realised this!) – luckily the generous Russians offered to repatriate them by Royal Mail.

My thanks to Roy for a splendid afternoon.
Posted by Stryker at 20:39 4 comments:
Labels: Guest Appearance, Playing Soldiers 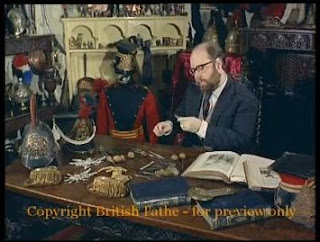 What can I say - brilliant!
Posted by Stryker at 11:37 11 comments:
Labels: Marcus Hinton, Waffle 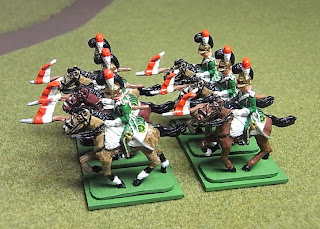 The 3rd Cheveau-Legers Lanciers were formed from the 8th Dragoons along with five other Dragoon regiments in June 1811. I’m not sure why Napoleon took the decision to re-fit his Dragoons in this manner and I would have thought that the extra training to use a lance must have been something of a distraction. In fact I read somewhere that only the front rank of the Lancer regiments actually had a lance whilst the remainder retained their swords.

The six models pictured here are listed in the Hinton Hunt Catalogue as FN118 Light Horse Lancer in crested helmet (mounted) charging. These are all vintage castings originally in the collection of Don in the US. I refurbished these rather than re-paint them from scratch but ended up doing quite a lot to them, mostly on the horses. Don had managed to paint the number “3” incredibly neatly on the saddle blanker rolls but I had to use one figure from the 4th regiment to make up the numbers. Although I changed the facing colours easily enough, there was no way I was going to try to paint one of those tiny threes (if you zoom in on the picture you can spot the error!).

Opting for refurbishing this Squadron was my cunning way to quickly get back on track with my painting schedule but I’m still quite a way off my May target.
Posted by Stryker at 09:37 5 comments:
Labels: French, Light Cavalry

Not as Spooky as I thought 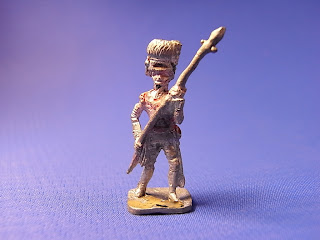 Well it was spooky because everything I wrote in my last post was completely true however, when I stripped the paint from the fusilier sergeant and looked at him more closely I realised he is actually a Guardsman figure BN/81 (a bit of a clue was the code number BN/81 stamped under his base – dooh!).

This spoils my idea for the unit of Welsh fusiliers but every cloud has a silver lining so I will be mustering in the unit as a battalion of Guards instead. This also gives my narrative of the old sergeant hanging onto his hat more credence – he just brought his best parade one along!

I may make the battalion a generic Guard one as all the battalions had the same blue facings. Guard’s battalion were usually much bigger than the line ones and I know that some gamers give them more figures – 30 figures would equal 1,000 men in my own rules. I will however be sticking to the 24-figure norm so my Guards will be a bit under strength (as some of them were by the day of Waterloo).

The moral of this story is - always wear your glasses when trying to identify figures.
Posted by Stryker at 10:12 2 comments:
Labels: British 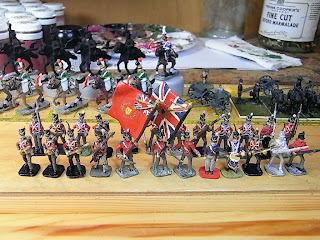 I’ve been sorting through my British infantry figures trying to decide which ones to use to make up a full 24-figure unit. I have about 30 or so suitable figures assembled from various sources over the last few years but not enough of any one type to be able to form a unit in identical poses. On the plus side though this means I get to put together a unit with just about every 1812-15 British infantry line infantry figure type in the Hinton Hunt range represented.

In with the regular line types I also have a single fusilier sergeant figure sporting a nice furry bearskin. It’s a really lovely crisp vintage casting of BN/71 and I felt compelled to include him in the ranks, as he is the only fusilier in my whole collection. This caused me a bit of a problem because one odd fusilier with the wrong headgear for 1815 would be a bit odd (even though this project is not an historical one so to speak). Then I hit on a brainwave – make the whole unit one of fusiliers that now wore the regular shako and add this lone figure in as an “old sergeant” who refused to give up his old hat!

So next I had to look through my copy of Wellingtons Regiments to find a unit to fit the bill and settled on the 23rd Royal Welsh Fusiliers. This seemed like a good choice because between them the 1st & 2nd battalions were present throughout the whole Peninsula War (even fighting at Corunna) as well as at Waterloo, albeit in a reserve capacity. Then the spooky thing happened, as I started to sort through the figures prior to their bleach dunking, I noticed that the regimental flag painted by the previous owner had the number “23” painted on it!

I’m now in the process of preparing and undercoating the figures ready to send them off to Matt who has kindly agreed to work his magic with his paintbrushes.

I upgraded my browser to IE9 a couple of days ago only to find that I can no longer publish my Blog posts! Finally found a way to fix it - go "Tools" in the browser bar then "Compatibility View Settings" then add "blogger.com".
Posted by Stryker at 09:31 7 comments:
Labels: British
Newer Posts Older Posts Home
Subscribe to: Posts (Atom)