Yesterday we played my Ligny scenario for Muskets & Marshals. The game went well, and we managed to complete the required eight turns. I commanded the Prussians whilst Tony and Goya played team French, this is what happened.


The final result was a marginal victory for the French with a win of 8 points. It was a hard-fought affair with a fairly historical outcome. My thanks to Tony and Goya for a most enjoyable day.
Posted by Stryker at 12:53 20 comments:
Labels: Playing Soldiers

Finished in the nick of time the 1st Silesian Hussars are cantering towards the action at Ligny on Saturday. 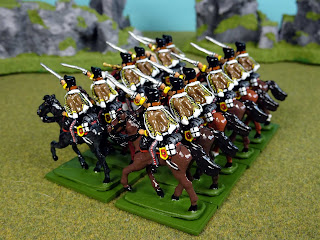 The figures are PN.85 Prussian Hussar (mounted) charging with one converted to a bugler. 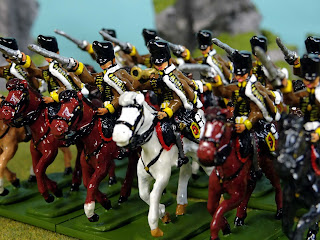 It's the morning of 16th June 1815 and Wellington and Blucher have met at Bussy Windmill near Ligny for a council of war.

We plan to fight the game a week on Saturday and a full after action report will appear here in due course.
Posted by Stryker at 15:24 7 comments:
Labels: General Staff, Playing Soldiers 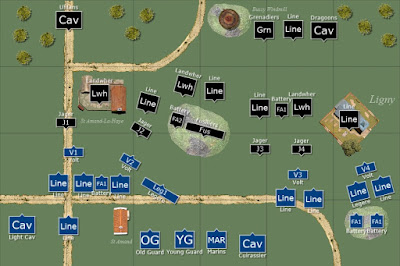 I’ve knocked up a scenario for our next game based on the battle of Ligny so I can put all those Prussians to good use. Initial deployment will be as per the map opposite - The game starts at 4.00pm (16 June 1815) and lasts for 8 half-hour turns. The French are already in possession of St Amand while the Prussians hold Ligny and St Amand-La-Haye. The table is 6’x 4’ and the terrain is a simplified representation of the real battlefield (I have removed the Ligny brook as this is difficult to represent accurately using my terrain tiles and wasn’t much of an obstacle in the real battle anyway).

Roll 1 D6 per
unit at the start of each turn (from turn 3 onwards) – 4,5 or 6 unit released from the reserve. Units can either advance from their current locations or move laterally to any place on the table base line.

Turn 1 – initial turn of firing only.
To make BUA’s a bit easier to take the following modifications will be made
Firing – treat buildings as Soft Cover
Melee – no additions for defending buildings however attackers do not get charge bonus
Posted by Stryker at 19:47 12 comments:
Labels: Playing Soldiers 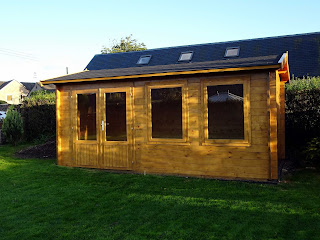 One of the reasons I haven’t got much painting done over the last few months is that I’ve been constructing this log cabin in the back garden. Log cabin is my preferred name whereas Goya insists on calling it a hut which I suppose is just one better than a shed.

With a generous 5m x 3m footprint I’m finally going to have a dedicated space for my painting desk, wargame table and associated stuff. There should even be room for Goya to park his sedan chair in the corner when he visits.

The cabin was a kit, which was just as well as I never was much good at woodwork but kits I can do. I was always an annoyance to my woodwork teacher as, being left-handed, he had to reconfigure the woodwork bench for me. Whist doing so he would mutter about kids who were ‘cack-handed’ as he so nicely put it (this was long before the invention of political correctness).

Anyway, I’m pleased with the result and now just need to fit out the inside.
Posted by Stryker at 11:11 16 comments:
Labels: Waffle 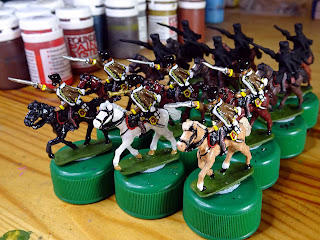 I’ve just passed the halfway mark on the Silesian Hussars with 6 figures completed and the remainder underway. I have enjoyed painting these and for once even the white buttons on the trousers haven’t been a chore, this may be because I have broken in a new paintbrush. I tend to hang on to my paintbrushes for far too long because they become comfortable (a bit like shoes) but when I finally reach for a new one, I’m always amazed at how much easier it is to use.

It’s been quite refreshing to be able to go with mixed horse colours for this unit as the last few cavalry units I’ve painted have had horses all the same colour. The Hinton Hunt painting instruction sheets always specified the correct horse colours which is a detail not often included in uniform books.

The trumpeter is the last of the clever conversions carried out for me by Wellington Man. It was only when I started to paint the figure that I realised he had added a sword hilt to the scabbard and carefully removed the carbine from the riders’ leg. How he has managed to do either of these things so neatly is a mystery to me, but I’m very grateful to have such a lovely addition to the ranks.
Posted by Stryker at 19:29 14 comments:
Labels: Conversions, Light Cavalry, Prussian
Newer Posts Older Posts Home
Subscribe to: Posts (Atom)