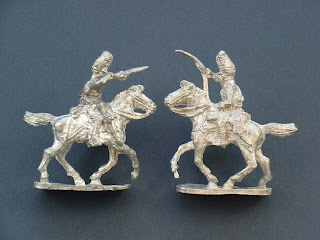 I’d like to start this post by thanking Clive who responded to my mentioning that I had no Hinton Hunt Scots Grey’s in my collection by sending me six pristine vintage castings of BN49 Scots Grey’s Trooper Charging. I thought this was a very nice gesture and have decided that the Grey’s will be the next unit I paint.

I was surprised by just how superb the figures are considering they are part of the early one-piece range of cavalry models, which are not everybody’s cup of tea. I had never seen one in the flesh before but have often admired the picture of these same figures on the front cover of Donald Featherstone’s “Advanced Wargaming” book.

My photo shows two of the castings in their raw unpainted state (click on the image to see more detail) and as soon as I finish the French Fusiliers I will be preparing and black undercoating them. I have been painting wargame figures for many years but have only attempted to paint one Scots Grey before and that was a 1/32 scale Airfix model in the early 1970’s. I made a real mess of it with a hideous smudgy grey effect on the horse, the rider and my fingers. The model went in the bin. I know therefore that my biggest challenge will be to reproduce a decent dapple-grey effect on the horses.
Posted by Stryker at 17:37 4 comments:
Labels: British, Heavy Cavalry 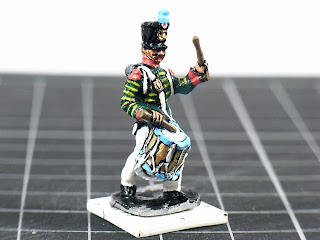 My rate of painting has tailed off dramatically in the last week or so and this French Line Drummer is the only new figure I have to show for my efforts. The rest of the time has been spent plodding through the remaining few Fusiliers of the 45th Regiment. I do find that painting a full 24 figure unit is hard going, particularly the last half dozen or so figures.

This is a vintage Hinton Hunt casting of FN6 Drummer. As Hintons go this is not the best of sculptures. The arms are a bit chunky and the drumsticks look like small cudgels. The figure also suffers from “disappearing detail syndrome” where a moulded line inexplicably vanishes into a metal blob as you follow it with the paintbrush. However, as always the finished article does possess that charm unique to the Hinton Hunt range.

I found it a bit frustrating trying to work out how to paint this one as he is a bit of a hybrid, not quite Fusilier and not quite Grenadier either. In my Hinton Hunt catalogue he is listed simply as “Drummer Charging” so I guess he was meant to be painted as either. In the end I settled on the paint scheme shown which was drawn from several different uniform reference books. I have two drummers to complete the command group for the 45th Regiment of the Line.
Posted by Stryker at 09:58 2 comments:
Labels: French 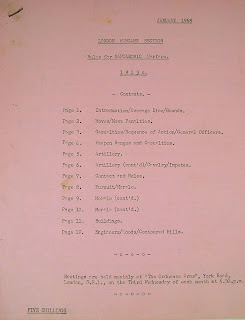 Now I have more than a handful of finished figures my thoughts are turning to gaming with them. My first set of Napoleonic wargame rules were bought via an advert in Miniature Warfare magazine. These were the London Wargame Section (LWS) “Rules for NAPOLEONIC Warfare 1813c”. My brother and I bought these because we naively thought they must be “official” as they came from London.

The rules turned out to be a little disappointing (the first of many!) and had some odd things in them like rule 23 “To reharness a horse takes half a move”. However, we took certain mechanisms from them that I still use to this day. The rules used something called “average dice” that were a mystery to us for a while and couldn’t be bought locally. Because we only had regular dice this led to frequent halts during battle while we tried to figure out if a one was really a two or if it was a three.

When I was a little older I briefly joined a local wargame club where the hot new rules of the time were Bruce Quarrie’s published in his book “Napoleons Campaigns in Miniature”. This book is actually a very good reference and I still like leafing through it today but the rules proved just a tad too complex for me with my CSE Maths.

In the end I took to writing my own simple rules on a single sheet of A4 paper with surprisingly good results. I eventually had a set I used with my large army of Airfix figures. Unfortunately these rules have not survived but I do still possess the original copy of the LWS ones dated 1968 and I intend to test them out once again with my new Hinton Hunt forces.
Posted by Stryker at 09:16 No comments:
Labels: Waffle 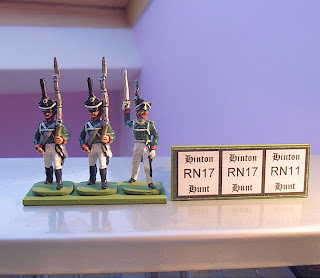 I have a bit of a problem when it comes to basing. Quite simply I can never decide what looks best and when I do decide I tend to change my mind. Some of my wargame figures have been re-based many times over to which my long suffering wife can testify “Do you think the dry brushed sand with the pale green flock or the grey boulders with lichen?”

When I started this project I initially thought I should mount the infantry figures on scenic bases in groups of six and I tried this with my first batch of figures. They did actually look pretty good but I had a problem. One of the appealing characteristics of Hinton Hunt Figures is their unique square base with rounded corners. Apart from the aesthetics, the base on the figures is the best way to tell if they are genuine vintage castings or not and I didn’t want this feature to be hidden away.

The solution was to go back to basics and use simple plasti-card bases which was exactly what I ended up doing with my 1970’s army (after trying plywood cut with a blunt hacksaw!). The figures are mounted in threes with a two and a one in each unit for casualty removal. The frontage per three-figure base is 40mm with a depth of 15mm and the whole stand is painted with Humbrol matt green 80. I have gone a few steps further into the realms of the sad anorak by adding a label under each base with the figure code.

Apart from the “Old School” look achieved this system has a practical function to help me with my problem – it makes the figures very easy to remove for re-basing!
Posted by Stryker at 09:30 7 comments:
Labels: Russian, Waffle
Newer Posts Older Posts Home
Subscribe to: Posts (Atom)