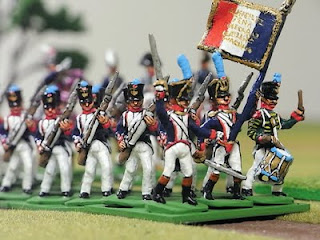 I did mention a few posts back that I was adding some Unit Histories pages to this blog mostly for my own amusement but also to help me remember which figures I used for each unit. I've updated these with some better photos and added a few more units to the rolls.

I remember many years ago that John (one of my wargaming buddies from school) started an index card system to keep track of the exploits of our English Civil War regiments. This was a bit of fun to give the units some character on the table and was probably influenced by something we'd read in Featherstone or Grant. I suppose my blog lists are a 21st century version of this same idea.

You can find the pages by following the links towards the top of the right hand menu bar under the Rules & Stuff heading. You might also find it useful to use the labels for the various battles (below my blog list) for more details of the exploits of my troops. On the other hand you may have something better to do.
Posted by Stryker at 20:49 12 comments:
Labels: Waffle

A mob of Cuirassiers 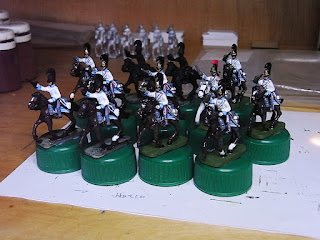 Is that the correct collective noun? Slowly but surely my Prussian cuirassiers are reaching completion. It’s slow work because these are tricky customers to paint with lots of black outlining and zillions of buttons on each one. However, I’m more than pleased with the results so far.

I’ve made a small tweak to my rules Muskets & Marshals to allow cavalry in three classes – Heavy, Medium and light. Previously it was just Heavy and Light but I wanted to introduce a different value between dragoons and cuirassiers to add more tactical interest to the cavalry melees. This is still to be play tested so I haven’t amended the rules on the blog yet.

A rough and rather scary calculation revealed that it is at least 45 years ago that I painted my original unit of PN.77 Prussian Cuirassier. I sometimes wonder whatever happened to my original army after I parted with it and whether the figures are still in play somewhere – I hope so.
Posted by Stryker at 10:23 17 comments:
Labels: Heavy Cavalry, Prussian

This is a close up shot of the command group from Roy’s 'Old Guard in bicornes' unit that I snapped during our last game.


And here's another photo that Michael sent a few days ago this time of his unit of French ‘Sailors of the Guard’ - very smart.

I’m normally pretty disciplined about the way I run my painting desk. The rule is ‘one unit at a time’ and even then I only paint in small batches – usually three figures at a time. However, since the start of the year I have quite uncharacteristically been drawn this way and that and currently have three Hinton Hunt units in progress.


My hope is that at the end of this - a bit like waiting for a bus - all three units will be finished at the same time.
Posted by Stryker at 11:16 11 comments:
Labels: Waffle
Newer Posts Older Posts Home
Subscribe to: Posts (Atom)