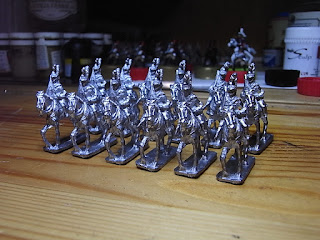 I know I’m crazy to be adding to the lead pile because I already have more stuff than I am ever going to be able to paint but I just couldn’t resist these French Dragoons. They are the two-piece version FN/148 Dragoon of the line 1807-12 on horse FNH/5.

My justification is that a) I don’t have any of these (and even Roy’s collection is light on them) and b) I already have some dismounted ones and it would be nice to represent a unit both mounted and dismounted. Strangely these arguments did not impress Mrs S however.

The castings are David Clayton produced ones and it has been interesting to compare the horses with the vintage ones currently on my painting table. They are of course slightly smaller because of the inevitable shrinking when a copy is made from an original figure (as Clayton was forced to do due to the lack of masters) but are superb little figures none the less.

The arrival of these figures has also shed some light on the horsey mystery in my last post as the bases are clearly stamped FNH/1 although they are actually FNH/5. I’m guessing then that the ‘1’ was an error on the original figures although it still doesn’t explain my mystery variant.
Posted by Stryker at 10:23 15 comments:
Labels: David Clayton Figures, French, Heavy Cavalry 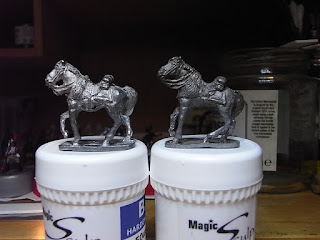 I started to clean up the horses for my Cuirassiers today by removing what felt like several kilos of flash metal from them followed by some seriously fiddly filing work. It was only when I finished the first half dozen and lined them up (well you do don’t you?) that I realised I had a bit of a mystery on my hands.

The figures are vintage ones that I’ve had for quite a while and I had assumed that they were all FNH/5 – the heavy cavalry horse that according to my Hinton Hunt catalogue is used for Cuirassiers, Carabiniers and Line Dragoons. The problem is that there appear to be two versions of the horse as you can see. Annoyingly the figure codes under the bases are not completely clear but I know that the horse on the left is definitely FNH/5. The one on the right looks like it has code FNH/1 on it but mysteriously my catalogue does not mention this code at all as it lists only FNH/2-FNH/7.

I’m sure the casting is genuine and the sculpting has more in common with some of the older one-piece figures being anatomically a bit odd. I’m just wondering if FNH/1 was perhaps one of the first castings made for the dismountable series being later revised and replace with FNH/5. Sounds like a good theory but does anybody know?
Posted by Stryker at 18:28 7 comments:
Labels: French, Heavy Cavalry, Waffle 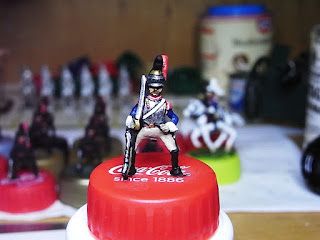 I always find it quite hard to know just how far to go when painting detail on my Hinton Hunt figures. For a start a lot of the detail just simply does not exist on the castings and has to be invented and painted in. In the case of this Cuirassier trooper he had no clasp over his shoulders or belt around his waist.

The reason I paint a test figure is to decide what level of detail I’m going to go for and this is usually a matter of trial and error because sometimes what I plan to do just doesn’t look right on the figure. Often I simplify things, for instance I don’t usually paint buttons on the rank and file figures but will do so on officers and personality figures.

So tonight I’ve spent half an hour messing around with this trooper introducing the white edging to the red lining of his cuirass, putting a black belt around the bottom of it and painting in a brass shoulder fastener – all things specified in the Hinton Hunt painting instructions but not actually modelled on the figure.

Whether this is really worth the effort or will be visible on the table during Vintage Waterloo (where this figure will be lost amongst 2,000 others) is debatable. However as this will probably be the only French Cuirassier unit that I paint for this project I’ve decided to make the effort even though it will add a couple of hours extra painting time to getting this unit finished.
Posted by Stryker at 21:02 10 comments:
Labels: French, Heavy Cavalry, Vintage Waterloo 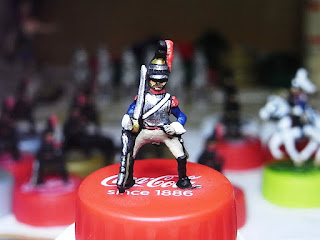 Thanks to a kind donation by Roy of three spare Cuirassier riders I have been able to assemble a full 12 figure unit to bolster the heavy cavalry element of my French forces. This is my test figure FN/310 Cuirassier (dismountable series) and his fellow troopers are now well underway.

Like many of you who read this blog I began my interest in Napoleonic wargaming when Airfix released their 1/72nd French Cuirassiers and Highland infantry way back in 1969. I bought quite a few boxes of both but had to wait until 1972 before they could be reinforced by French and British line infantry. I don’t think I ever painted one of those plastic Cuirassiers preferring to use them unpainted for battles on the carpet.

I’m hoping to have this unit finished in time to take part in Vintage Waterloo the date of which has slipped back to the end of November (any more slippage and it will be a game to mark the 201st anniversary). I think this will give Roy and I four units of Cuirassiers and two of Carabiniers and they should look pretty spectacular en-masse – certainly better than my unpainted plastic ones ever did.
Posted by Stryker at 15:46 9 comments:
Labels: French, Heavy Cavalry, Vintage Waterloo

Well this time I’ve gone the whole hog and attempted a trumpeter conversion from scratch for the next unit on the painting table – the 1st Cuirassiers. 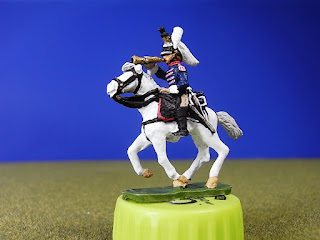 Starting with a vintage casting of FN/102 Cuirassier trooper (mounted) charging I removed the sword (not too terrible as this was a stubby one) and bent his arm into a suitable position. 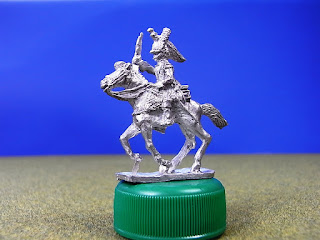 Next I super-glued a small length of wire to his mouth, hand and my fingers – doh! The trumpet was then built up using Green Stuff which was tricky, mainly because my Green Stuff is well past its best having dried out somewhat. 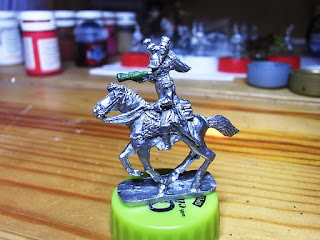 I also carefully carved away at the figure to remove his cartridge box and carbine and filed down a few bumpy bits to remove his cuirass. I forgot however to remove his epaulets which I should have done according to my Osprey. 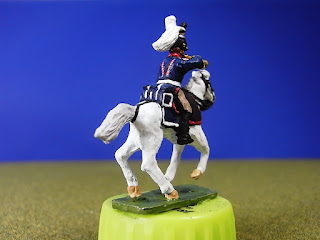 So I’m pretty pleased with this one and I may now be asking for a soldering iron for Christmas – who knows what might happen then?
Posted by Stryker at 09:05 10 comments:
Labels: Conversions, French, Heavy Cavalry

Even more from Roy on Vintage Waterloo

A couple of weeks ago I dropped in at Roy’s house where he was hosting another Vintage Waterloo game for some of the members of his local wargame club. It was a great afternoon and it was very useful for me to get some feedback on my rules Musket & Marshals – in fact most of the players seemed to have a better handle on things than I did! 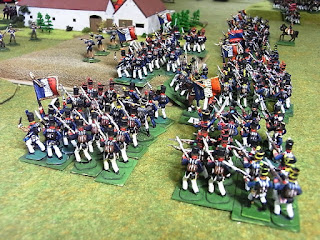 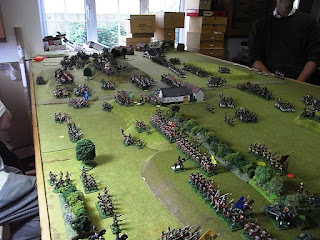 A general view of the battlefield from the allied side of the table (La Haye Sainte is the building in the centre). 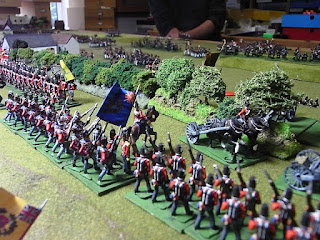 The allied line on the ridge between La Haye Sainte and Hougoumont. 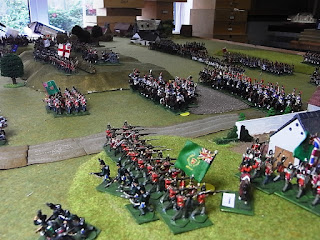 Napoleon made an early move with his heavy cavalry against the allied line to the east of La Haye Sainte. 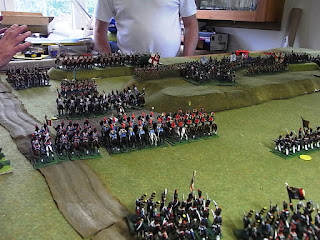 This confident move by the Emperor apparently brought great success later (although this was after I departed with the camera).

I didn’t have time to stay and play properly but I did get involved in umpiring the section of the battlefield on the allied extreme right flank by Hougoumont. It was quite an intense little fight that was made extra difficult for the French player as Napoleon (in his wisdom) had failed to deploy a single gun battery west of the chateau. We did get some varied action however including cavalry against square, cavalry charging horse artillery and a couple of cavalry melees. 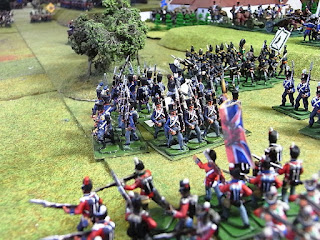 Mostly Dutch troops (with one British battalion) were forced into square on the allied right by the antics of some French light cavalry - this was the bit I helped to umpire and I was pleased with the way the rules dealt with the various tactical situations. 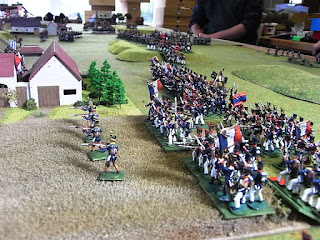 Another view of the French infantry advancing past Hougoumont. 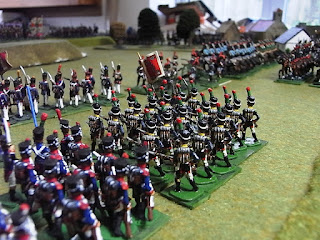 The Young Guard - that's the lovely unit painted by Matt B for Roy (with the red flag). 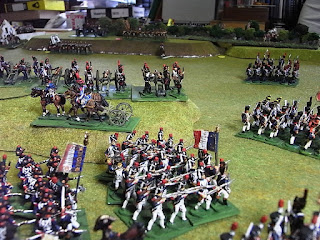 The Old Guard is moving up - Napoleon seemed quite anxious to get them into the fray! 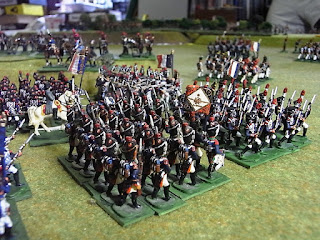 Some very Old Old Guard here by the looks of it.

My thanks again to Roy for his hospitality (lunch was just superb) and also to the players for being patient enough to give my rules a serious run through. Roy and I are yet to play our ‘official’ game of Vintage Waterloo but we have decided that when we do we will be running it as a multi-player affair.
Posted by Stryker at 19:48 7 comments:
Labels: Playing Soldiers, Vintage Waterloo
Newer Posts Older Posts Home
Subscribe to: Posts (Atom)