Last week I was over at Tony’s playing out his excellent C&C Marston Moor game. I played a dashing Prince Rupert whilst Goya took on the role of the dastardly Parliamentarians. It was great fun as always and I was delighted to get to use Tony’s spectacular collection of 20mm ECW troops. Most of you will have already seen Tony’s blog post on the subject but here a few more photos from the day.


I was particularly interested to re-fight Marston Moor as I had played this same battle as a demo game in the early 1970s using Minifigs armies put together by myself and a couple of wargaming school friends. I can’t remember who won on that occasion, but we had a clear-cut victory for the Roundheads this time.


Tony put a lot of effort into the research for this game which (along with the superb veggie-haggis, tatties and neeps lunch) was much appreciated by the players. His clever adaptation of C&C for the ECW worked very well and provided just the right period feel to the ebb and flow of the game. I very much hope I get to play another of these.
Posted by Stryker at 17:13 7 comments:
Labels: Commands & Colors, ECW, Playing Soldiers 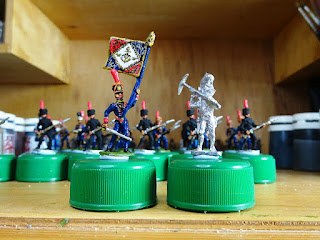 Thanks to Ken, who sent me details of the flag carried by the Guard Marines, I have been able to complete my eagle-bearer for the unit. I used a reproduction casting of FN/4 Colour bearer (charging) which is notably flimsy compared to vintage castings however as I’ve now run out of these he’s had to step in.

The whole time that I was tackling the flag I was wishing Wellington Man was doing the job for me as I knew I wouldn’t be able to produce anything like the two amazing flags he painted for me last year. However, I persevered and in the end I’m pretty pleased with the result which is the best hand painted flag I’ve done so far for this project (and yes Ken, I did paint tiny anchors in each corner of the flag!). 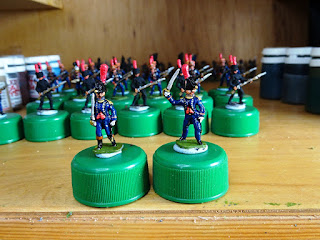 I was fortunate this week to receive from Roy a few more engineers including a lovely casting of FN/177 Guard using pickaxe. As with the chap with the spade the pickaxe needed a repair as half the axe head was missing. This was rectified with a lot of cursing and fiddling around with Magic-Sculp but I intend to find room to squeeze him into the ranks.

Finally as you can see, I also repainted the waistcoats on my officers red as I was finding the white jumped out too much. Looking at uniform prints on the web it would appear that both colours were in use for the marines but I thought the red blended in better with the rest of the unit.
Posted by Stryker at 12:36 17 comments:
Labels: French, Guard, Marine

I’ve painted some command figures for the Guard Marines this week, nothing too taxing as there are only three of them. I don’t have any proper Marine Officers so I’ve had to improvise and use one Duchy of Warsaw figure and one French Dragoon figure as they seem to have the right sort of hat.

The drummer is a bit of a mystery and I can’t remember where he came from. The base has “HH” stamped on it but it’s not a figure from the original range so could possibly be a Clayton variant. It appears to be based on FN/6 Drummer (charging) with an added plume which was just what I need for the Marines. The sky blue uniform will add even more colour to this unit.

Next I need to finish the eagle bearer and then it’ll be on with the final six of the rank and file.
Posted by Stryker at 19:07 17 comments:
Labels: French, Guard, Marine, Polish

The cabinet is back

The only casualty of our house move last year was my acrylic mirrored display cabinet which suffered a broken shelf. I can’t even blame the removals company because I broke it myself taking it off the wall in our old house.

Its taken a whole year but I finally got around to replacing the broken shelf with a new piece of acrylic sheet which was a tricky and rather nerve-racking experience. Today I fixed it to the wall in my study and was finally able to get the Hinton Hunts out of their storage boxes and back on the shelves where I can see them.

The cabinet is very tricky to photograph because of the mirrored back so apologies for the quality of the photos but I thought some of you would be interested to see the collection en-masse. There are 600 figures on the shelves and I have another 200 or so that wouldn’t fit in.


The question now will be which troops do I displace when I finish the Guard Marines?
Posted by Stryker at 20:10 24 comments:
Labels: On Manoeuvres, Waffle

Engineers of the Guard

I received a couple of vintage Hinton Hunt Engineers of the Guard figures quite a few years back (the Officer came from Don and the chap with the spade came from Mark). I got as far as restoring the damaged shovel head of one with Green Stuff and undercoating both but never got around to painting them as I couldn’t think of a use for non-combatants.

In the last few days though while looking up information on the Marins of the Guard I came across this in Mark Adkin’s Waterloo Companion “At Ligny, with the Engineers of the Guard, they (the Marins) formed a small assault column that stormed the eastern part of the village.” That seems like a very good reason to include them in the ranks of my Marins.

I’m not sure whether the Officer with the map will be much use in an assault however the guy with the shovel looks like he could be dangerous to somebody's ankles in a melee. I thought they would add a little bit more colour to an already colourful unit.
Posted by Stryker at 17:13 15 comments:
Labels: French, Guard

Sailors of the Guard 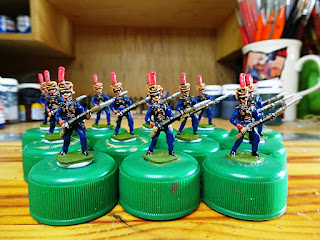 I painted three Marins of the Guard back in 2015 but they were passed over in favour of various units for the Vintage Leipzig project and have languished in a storage box ever since. As my current objective is to paint French Guard units it seemed like a good time to dig them out and paint a few more.

I ended up making a few adjustments to the way I’d painted the original three after re-reading the Hinton Hunt painting instructions and looking at a few uniform illustrations on the internet. I’m fairly happy with the overall look now and have completed a further nine figures taking me to the halfway point for this unit.

It turns out that the Marins were not actually officially part of the Imperial Guard however at Waterloo they were deployed in their support, although only in Company strength. In my army they will be at full battalion strength and may even possess an eagle which seems fair to me even if not strictly speaking historical.
Posted by Stryker at 17:29 22 comments:
Labels: French, Guard, Marine
Newer Posts Older Posts Home
Subscribe to: Posts (Atom)