I’ve had several comments over the last year querying my technique for removing the paint from old castings to prepare for re-painting. When I started on this project I wasn’t really sure how I was going to do it as I didn’t like the idea of using heavy duty paint-stripper, which seemed the logical choice. I found a website selling a modellers version of paint-stripper and placed an order but the goods never showed up (they didn’t take my money either to be fair). So then I Googled ‘stripping paint from toy soldiers’ and discovered someone that used domestic bleach to do the job. This seemed like an all-together friendlier way of carrying out the task and after experimenting came up with the following simple method that seems to work on all types of paint.

Take a batch of 12 or so infantry or 6 cavalry figures and pop them in a glass jar before covering them with domestic bleach – the type you put down the toilet not the ‘thin’ stuff - then leave overnight to soak. Next day carefully pour off the liquid down the sink making sure not to lose any of the little men down the plug-hole in the process. At this stage it may well look as if nothing much has happened as most of the paint will probably still be attached to the figures. 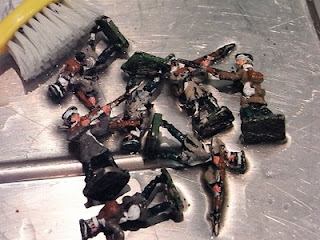 After the first dip

Part fill the sink with warm water and put the castings in then gently scrub them under the water with a toothbrush (I have discovered that it’s best to use an old one not the wife’s favourite one). Most of the paint should come away like magic but you may find some hard to shift bits - normally reds and flesh colour are the most stubborn. Sometimes you may need to give the castings a second soaking in the bleach and repeat the process. Wash the figures with soapy water and then rinse with clean water to remove any traces of the bleach. When the figures are completely dry brush them again with a dry toothbrush to get rid of any bits. If after all this there are still any small areas of paint remaining just leave them – a coat of undercoat should seal them. 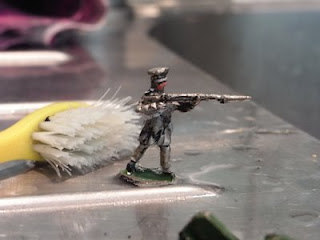 After the first scrub

I should point out that bleach is not a very friendly chemical and you should wear protective gloves when using it. Children under 14 years should not attempt this technique (ask an adult to do it for you). One final point, don’t leave the figures for too long at a time in the bleach as they might become tarnished or form areas covered with a white powder. I’m no chemist but I guess that some sort of reaction with the chlorine may set in. This has only happened to me once but as a precaution I limit the time in the dip to about 8 hours.

A while back my brother was perusing my HH collection when he reminded me that the very first Hinton Hunt figures we ever bought (way back in 1968) were Prussian Landwehr. He said he remembered how he was slightly disappointed to find that the first wargame figures he painted ended up looking more like Traffic Wardens than colourful Napoleonic soldiers. 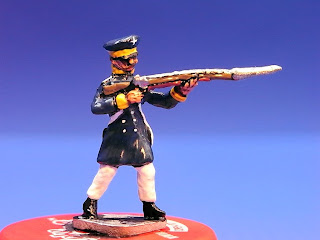 Silesian Landwehr private in action (1815)
Those of you who have read from the beginning of this blog will know that part of the aim of this project was to recreate the Hinton Hunt army I painstakingly collected as a teenager and subsequently sold for five magic beans. That army was a Napoleonic Prussian one and it has taken me nearly three years to assemble a reasonable number of HH Prussians again*. The figure above is a Clayton casting of PN19 Prussian Landwehr Firing. I have painted it (from memory) to the scheme given in the original Hinton Hunt painting instruction sheet as a private of a Silesian battalion. This is my ‘test’ figure and I will shortly be starting work on a full battalion. 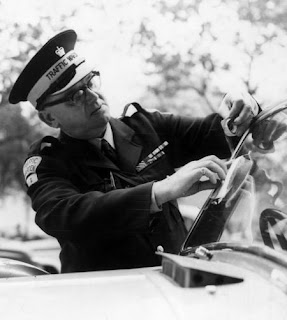 London Traffic Warden in action (1960)
For non-UK residents I should explain that a Traffic Warden was an official who used to enforce parking regulations by handing out fines for any infringements of the rules. In my youth I had several jobs as a delivery driver and mostly these Wardens were pretty ok as long as you were polite to them. Sadly a more sinister official called a Parking Attendant appears to have replaced them in recent years.

*Many thanks to Hank in the USA who sent me enough Landwehr figures to help raise three whole battalions.
Posted by Stryker at 16:52 2 comments:
Labels: Prussian

We’ve just got back home after a fantastic Easter weekend visiting our daughter Lucy in Glasgow. The high point was a trip to Edinburgh on Saturday and a walk up the Royal Mile to the castle all under a lovely warm spring sun. We didn’t actually go in the castle as it was very busy but I was surprised to find several statues and monuments just outside the gates. 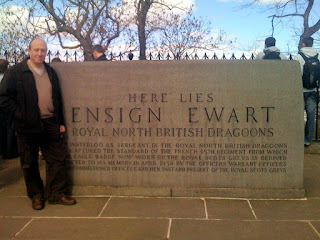 Lucy managed to snap this picture before a very nice official looking lady came up and told everybody not to stand there as it was a grave (I had assumed that the grave was under the plinth and of course meant no disrespect by standing where I did). This was the last resting place of Ensign (formerly Sergeant) Ewart of the Scots Grey’s who famously took the Eagle of the French 45th Regiment at Waterloo. I say “last” resting place because he was originally buried near Manchester where his grave was forgotten and paved over. It was rediscovered in the 1930’s and the body was moved to the esplanade outside Edinburgh castle. 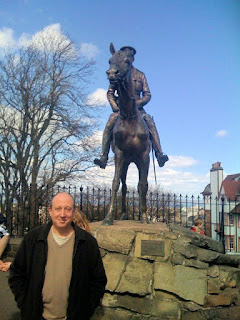 Also on the esplanade was a statue of Douglas Haig (he’s slightly obscured by the horses head here) and having jostled some Japanese tourists out of the way Mrs S eventually managed to get this shot. I didn’t know that Haig came from Edinburgh or that, despite the name being a bit of a clue, his family were connected to the whisky business. Haig’s had quite a lot of bad press over the years but I think he became a bit of a fall guy like Bomber Harris after WWII. His horse looked nice though.

We also made a visit to the Elephant House Café where J K Rowling was inspired to write about wizards and such – presumably as a result of gazing out the window at the castle perched above her on the hill. All great stuff and well worth a visit…

For my own HH tribute to Sergeant Ewart’s moment of glory click here. 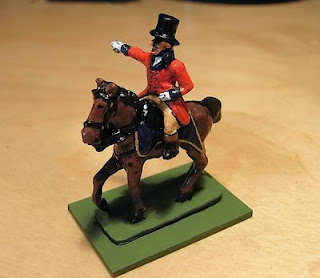 It has to be said that this figure looks more like the leader of a circus than of the British 5th Division at Waterloo. It is of course Hinton Hunt’s rendering of General Thomas Picton, BN253 mounted on BNH11. I have referred to the HH painting instructions to produce this one so don’t blame me for the big-top look.

Picton was a “rough-mouthed devil” according to Wellington but was also rated as one of his most able senior officers. He fought throughout the Peninsula war taking part in the battles of Fuentes de Orono, Badajoz and Vitoria. He was wounded at Quatre Bras (a fact he hid from the Duke for fear of losing his command) and took a musket-ball through the head whilst repulsing d’Erlon at Waterloo - who can forget Jack Hawkins portrayal of this moment in the film? He had an unusual style of dress, which accounts for the top hat and even wore a nightcap during the battle of Busaco. They don’t make good ole’ English eccentrics like that anymore.


I’m still plugging away at those Schleswig-Holstein figures but thought I should take a quick break to paint and post something actually related to the title of this blog. Next up (after the painting desk is completely cleared) will be some HH Prussian Landwher – yes, the Prussians are coming at last!
Posted by Stryker at 09:04 4 comments:
Labels: British, General Staff
Newer Posts Older Posts Home
Subscribe to: Posts (Atom)