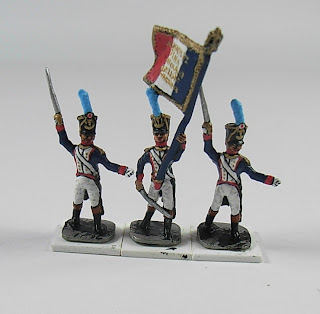 And here they are - the Eagle Guard of the French 45th Regiment of the Line. Historically the Colour Guard was made up of the Porte-Aigle, a veteran of 10 years service, and two sergeants with similarly impressive credentials. As I have no sergeants I have substituted 2 Officer figures. The picture shows:

The Eagle Bearer figure has a flag cast on the pole. Hinton Hunt Figures only produced 2 Flag Bearer figures in their entire Napoleonic range, this French one and a British infantry bearer (both Regimental and Kings Colours). The flag on this model actually has the battle honours of the 45th engraved on it - Austerlitz, Friedland, Essling, Jena & Wagram. Hinton must have had darn good eyesight because I struggled to follow this incredible detail with my paintbrush.

The Guard’s job was to defend the Eagle from all comers. The Scots Greys captured this one at Waterloo but as I don’t have any Hinton Hunt Greys I recon it should be safe. Anyway, as already noted, my 45th have two Eagles due to a lack of infantrymen so they have a better than usual chance of preserving their honour.
Posted by Stryker at 19:26 1 comment:
Labels: French 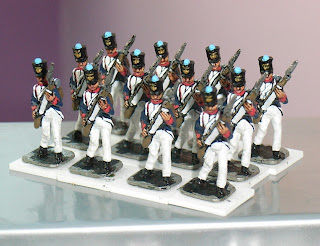 This is the first half of my unit of French Fusiliers - the 45th Regiment of the Line if you remember. The 45th had their eagle captured at Waterloo but these clever fellows have obviously left theirs back at barracks to avoid such a disgrace.

I confess that I have found it hard going painting this lot but having reached the halfway point I hope it will speed up. I have tried many times over the years to paint with production line methods in the hope of achieving a quicker turn around but in the end I always tend to paint just 3 figures at a time. More than this and I start to feel that painting has become a chore rather than an enjoyment.

These models deserve the attention however as they are all vintage Hinton Hunt castings that have turned out to be surprisingly rare considering that Fusilier figures should be the core of any French wargame army. Like many of the Hintons they have a very distinctive quirky stance. Perhaps not one of the best examples of Marcus Hinton’s work but when the command groups are added I still expect the Regiment to pass muster.
Posted by Stryker at 18:56 1 comment:
Labels: French 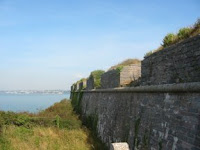 Now what has this got to do with Hinton Hunt Figures? Well, strictly speaking nothing. It’s more to do with history and the Napoleonic Wars in particular. Most days we take our dogs to Berry Head where they scamper about in and out of the ruins of the Napoleonic Fort and bark in an unruly manner at tourists.

On a really wet and windy day it’s not hard to imagine being a poor sentry stuck outside in the teeth of a howling gale scanning the horizon for a sight of Boney’s invasion fleet. The fascinating thing is though that eventually the soldiers manning the fort did get to lay eyes upon the Emperor although not as a conqueror but as a prisoner. 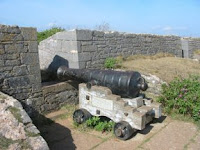 In 1815 Napoleon was brought to Tor Bay aboard HMS Bellerophon which anchored off Berry Head. The Emperor was convinced that the British were going to let him come ashore and live out his days on a country estate. He must have been pretty peeved when he sailed instead to St Helena.

Well, I find it all thought provoking but the dogs just treat the place like a park…
Posted by Stryker at 21:33 No comments:
Labels: Off Topic 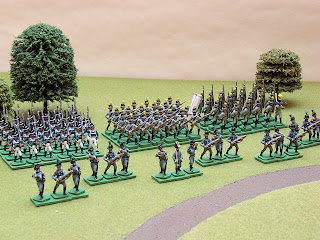 The men were getting restless stuck in the wargame cabinet so I ordered them out on manoeuvres to blow away the cobwebs.

Once in the field I noticed that there seemed to be an awful lot of Swedes about, perhaps because I can paint them faster than the other types as they are refurbished rather than painted from scratch. Taking a leaf from the imaginary SYW camp I decided therefore to form the "Federation of the North" consisting of Swedes, Russians and Austrians. The picture shows a brigade going through their drill - click on the image for a closer look.

An unusual aspect of building armies from vintage figures is that you can only create units from what you can find. This has resulted in some odd hybrid units such as the Anglo-Austrian battalion made up of renegade British sailors and Hungarian Grenadiers, but more of that some other time.
Posted by Stryker at 18:41 1 comment:
Labels: On Manoeuvres 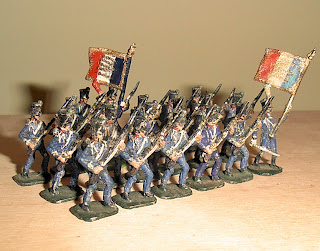 These ghostly looking fellows are Hinton Hunt French Line Fusiliers. They look battle weary, perhaps veterans of many a hard fight or maybe they have just been kept in a loft for 30 years? Either way they have been a bit problematic for me. I only have 18 of the advancing figures plus a command group of 3 figures and have been looking for the missing 3 men to make up the unit for nearly a year and a half. Finally I have decided to wait no longer and have inserted a second command group to make up the numbers.

This is a last look at them before they enter a jar of bleach to be reborn as sparkling new castings. These ones have actually been painted up as light infantry but they will soon be parading in new uniforms as a battalion of the 45th Regiment of the Line. The figures here are:

In keeping with the Old School theme of this project I will be fielding separate units of French Fusiliers and Grenadiers rather than a more historical mix of companies. When I first started wargaming I had no idea about unit organisation so a French battalion has to be all of one figure type to create the authentic feel.
Posted by Stryker at 10:52 No comments:
Labels: French
Newer Posts Older Posts Home
Subscribe to: Posts (Atom)