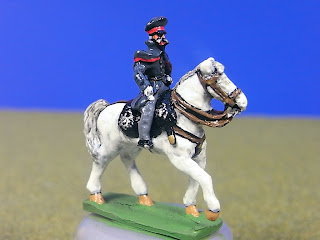 I said a couple of posts back that I was working on another personality figure and here it is - Field Marshal Blucher PN60 mounted on horse PNH1. I’ve had the figure of Blucher for some time but only recently acquired a horse for him thanks to Clive. Both figures are Clayton produced castings but the quality is excellent and if I didn’t know where they came from I would have been convinced that they were vintage figures. It does make me wonder whether David Clayton had much original HH stock when he took over production and if that became mixed with his own stock – does anybody know?

Painting this one was quite nostalgic for me as it is the only personality figure I had in my original collection. Of course I parted with that figure along with all my other original Hinton Hunt figures years ago so I’m really pleased to have him back. What’s also been very pleasing is that during my recent sort out I worked out that I have enough HH Prussians to build and army of 6 x 24 infantry units, 1 x 18 cavalry unit and 3 or 4 gun batteries. Over half the figures are Clayton castings and the quality of some are not so great but it does mean that I should be able to achieve the original aim of this project and recreate my old army. I only have to paint them of course – ha! 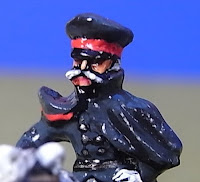 That clears the painting desk now until after the move – it’s still four weeks or so before we go but the next task is to pack my entire collection (and then the rest of our house contents of course).
Posted by Stryker at 09:51 9 comments:
Labels: General Staff, Prussian 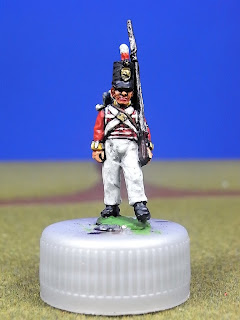 One of the many gifts lavished upon me this Christmas by Mrs S was the Wargames Foundry set of Napoleonic paint colours. This was perhaps a bit extravagant but I really like the fact that it gives a decent Prussian blue and Russian green (among many others) as these were both colours that I had found difficult to match using my existing paints. Now the clever chaps at Foundry included a ‘free’ 28mm British infantry figure in the set so of course I had to use him to test drive the colours.

Normally with my Hinton Hunt figures I block paint them reserving a bit of shading only for the personality figures. This means I don’t really get a chance to use the Foundry three shade colour system to its full potential but with this figure I was at last able to have a go. I actually found that it took me no longer to paint this figure than it takes to paint an average HH figure and I think this is partly because the detail on the model is so easy to follow (as opposed to the HH detail which is devilishly tricky). I really enjoyed painting it and would love to do a whole “In the Grand Manner” unit (all your fault Noel) but I have to be sensible as I’m already doing Napoleonic’s in 15mm and 20mm and to add in 28mm would be absurd, wouldn’t it…?

On a completely different topic, I have been clearing through the wargame room in preparation for our move and decided it was time to get rid of my hoard of wargame magazines. I have loads of them that I never look at and I don’t fancy lugging them back up the M5 (most of them were lugged down the M5 eight years ago). If anyone wants any old issues of Wargames Illustrated or Miniature Wargames please email me, as I am happy to send them to you for just the cost of the postage. I’m putting some on eBay but failing that they will be entering the Devon recycling system soon.
Posted by Stryker at 20:02 6 comments:
Labels: Off Topic 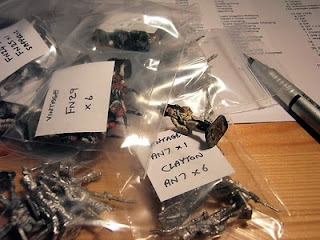 Over the last couple of evenings I have begun the long overdue task of sorting through my Hinton Hunt lead pile. Task is perhaps the wrong word as of course this is unadulterated geeky pleasure. It’s one thing to have the collection neatly listed on a spreadsheet (and of course I do) but quite another to actually sort through the figures for real.

I decided to do this primarily to get the figures ready for packing prior to our move next month but I also thought it was about time that I sorted them out properly into units to help give me more structure to this project. So I’ve been sorting the infantry into companies of 6 figures and bagging and tagging them and have already had a few surprises – some figures incorrectly identified the first time around as Clayton castings turned out to be vintage HH and (sadly) some vintage figures turned out to be copies.

When I started this project I never really expected to have enough figures for a decent wargame but the thing has snowballed and with the assistance of many other helpful and generous HH fans the armies have grown. The one big problem that remains is my lamentably slow rate of painting progress which means it will be years before I finish them all. One thing is sure though, I won’t be adding any more figures to the collection (in fact I haven’t bought any for well over a year now) and by fixing a proper goal I may just see the project all the way through to the end. When I work out what the end is I’ll let you know.
Posted by Stryker at 10:52 7 comments:
Labels: Waffle 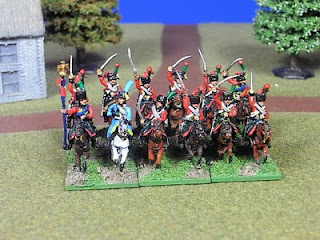 I’ll start with an apology because I am sorry to say I have no new Hinton Hunt offerings to post. This has mainly been caused by the disruption of the festive period but also by a slight slump in painting enthusiasm. With a house move looming on the horizon in February output will probably remain quite low and I don’t think I will be tackling any full units until after the move.

That said I have managed to finish this unit of 15mm Battle Honours French Imperial Guard Chasseurs. I say finish because they were an eBay purchase made before Christmas and I was the victim of a dodgy photo because they’ve needed far more work than I had anticipated. The biggest problem was trying to find a way to attach two new wire sabres and the top of the flag but I think I got there in the end. However at a quid each it wasn’t a bad deal I guess and I’m quite pleased with the way they turned out.

This unit is to be added to my Waterloo period 15mm armies for use with the Age of Eagles rule set. My initial aim is to amass enough troops for the Quatre Bras scenario included in the book and I’m not too far off this now.

I do have another HH personality figure in the pipeline that I hope to be able to post on soon so watch this space.
Posted by Stryker at 18:44 6 comments:
Labels: Off Topic
Newer Posts Older Posts Home
Subscribe to: Posts (Atom)