Tony and Goya came over on Sunday to play my Muskets & Marshals scenario for the Battle of Plancenoit. Tony took command of the French and Goya the Prussians whilst I acted as umpire.

For the scenario and initial deployments map click here.


At the end of turn 8 we were quite surprised to find that the game was a draw on points although possibly it was more of a strategic victory for the Prussians who managed to get troops around the French left flank. I was pleased that the scenario turned out to be so balanced and that we managed to play the full eight turns.

Games using my rules have tended to be bigger affairs of late, so it was nice to play something more manageable for two players which is more in tune with my original concept. The rules themselves have perhaps become a little more complex than I initially envisaged which is inevitable ‘mission creep’ I guess. I have some thoughts to streamline them but want to be careful not to tinker with them too much as generally they do seem to give a good game.

My thanks to Tony and Goya for a thoroughly enjoyable afternoon.
Posted by Stryker at 20:41 18 comments:
Labels: Playing Soldiers

I suppose in a blog that’s pretty much dedicated to nostalgia this is not an unusual title. However, after a year or so swelling the ranks of the Imperial Guard I thought it was about time that I revisited my Prussians.


If you’ve looked back to the beginning of this blog, you will know that the inspiration for this project was the idea of recreating the Hinton Hunt Prussian army I had in my youth. It has taken me a quite a few years to collect enough figures to make this possible, but I do now have everything I need.


So, next up will be a unit of Prussian Garde Grenadiers (in plumed shakos and jack-boots) in the marching pose PN.16 Guardsman (marching). I last painted one of these in 1972!
Posted by Stryker at 20:48 16 comments:
Labels: Guard, Prussian

Tony and Goya have agreed to humour me and play Plancenoit again but this time using my Muskets&Marshals rules. This will be on a smaller scale than our last attempt playing C&CN but I hope it will be just as challenging for the players (I’ll be umpiring).

For a bit of added interest, I’m going to try to post live updates of the game to my Instagram account . The game will be next Sunday 9th December hopefully kicking off around 11.00am - you’ll need to follow me on Instagram at hhfigures to see the posts. A full after action report will of course be posted here as well (eventually). 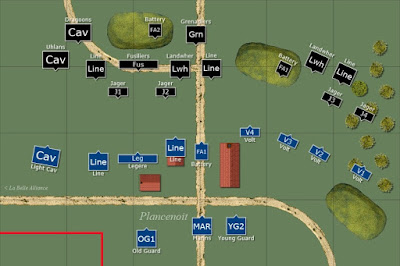 Troops begin the game deployed as per the map. The game lasts for 8 turns, at the end of turn 8 VP’s are calculated as follows:

Buildings – each building can hold one infantry unit. Each building has its own separate MDF base projecting from the side of the structure by 25mm enabling the placing of a single rank of figures around the perimeter. During the movement phase the defender will be allowed to move any of his troops around the perimeter to meet a threat with no penalty to firing. Normal firing rules will apply
Posted by Stryker at 18:44 12 comments:
Labels: Playing Soldiers
Newer Posts Older Posts Home
Subscribe to: Posts (Atom)