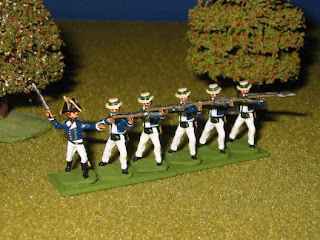 This is a rather obscure find. They are figures from the Hinton Hunt range of Royal Naval Landing Party figures. The firing figures have a very typical Hinton Hunt pose clutching their ‘tree trunk’ muskets and shooting a bit high (perhaps at the rigging!).

The officer is a particularly nice figure in a suitably swashbuckling pose and was great fun to paint. They are:

I also have a small group of Marines who will be joining them shortly for raiding missions against the French colonies!
Posted by Stryker at 10:01 No comments:
Labels: British

The British are coming! 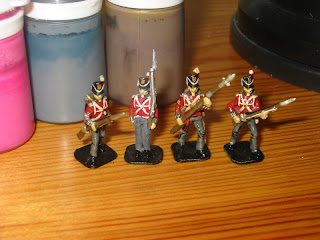 Over the time I have been collecting wargame figures I have only possessed a few British Napoleonic ones. At first I was interested in the foreign armies because I didn’t know much about them and they seemed quite exotic. Russians defending the great redoubt at Borodino, Austrians in their smart white uniforms and of course the Prussians arriving at Waterloo in the nick of time to save the day!

So it has been a pleasant surprise to find that I have accumulated a reasonable number of Hinton Hunt British figures. I guess these must be among the first of the figures released by Marcus Hinton and they are noticeably smaller than some of the other ranges and display some fine detail.

All these figures came from the same source via eBay and have been quite nicely painted. BN/7 is an interesting find – this figure would originally have been supplied with a separate musket that could then be glued to the figure enabling the creation of different poses. This figure is also useful for creating standard bearers (although the British range does already include these). All the figures pictured will (eventually) be stripped and re-painted by me. Click on the image for a closer look.
Posted by Stryker at 08:26 No comments:
Labels: British 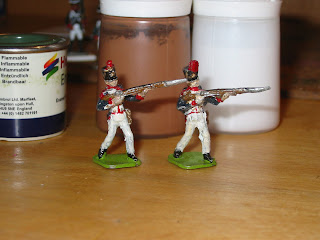 This is a picture of FN3 French Line Grenadier Firing. I picked up both of these figures from the same source but I suspect that only the one on the left is a genuine vintage Hinton Hunt figure. The figure has the HHF mark and FN3 code on the underside of the base which, as far as I know, was the case for all the figures made by Hinton Hunt Figures of Taplow.

The figure on the right was probably made later possibly from a mould made from an original figure. It lacks the same level of detail as the original and the metal is thicker in places – particularly on the shako plume. There are no markings at all under the base which suggests it is a later production or possible bootleg.

However, it may not be as simple as that as there is a fair bit of variation in quality even with the original Hinton Hunt figures. My Prussian Napoleonic army contained distinct variations within the same figure type (presumably there were several different production moulds in use at the same time) and not all castings were of great quality – however, the original figures did all have the HH codes under the base.