A plan at last 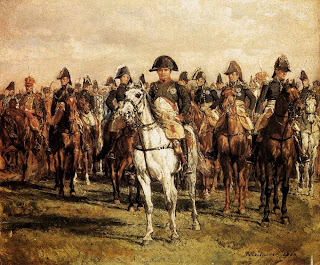 The conventional way to collect a wargame army is to first plan out what you want in the way of unit types and number of troops and then buy the figures and paint them. In this project I haven’t been able to do that simply because of the random way in which I have been forced to acquire figures due to their limited availability and varying cost.

Up until now this has not really been a problem to me as the ‘old school’ element of the project has meant I haven’t been worried about bizarre OOB’s and strange alliances (Swedes with French etc). However, at the last game I played with Roy, I realised that having British troops allied to the French was possibly going a step too far.

As a result of this I have decided to focus on finishing off my French army and to this end have decided that it will be comprised as follows:

This is the maximum in the way of figures I feel is practicable for one player to command in a single playing session without running out of time or space to play on my 8’ x 4’ table.

Still to paint are:

That’s the plan then…
Posted by Stryker at 09:23 7 comments:
Labels: French, Waffle 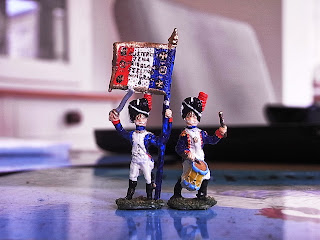 By complete and utter coincidence these chaps dropped through the letter box yesterday just a few hours after I put up my previous blog-post. Amazingly they are the same figures I was just waffling on about (FN24 Guard Standard Bearer and FN25 Guard Drummer). This means I now have enough command figures to complete both of my Old Guard units.

The figures were very kindly sent to me by Don from the US and he originally posted them to me nearly two months ago however due to an address hiccup they have become very well travelled having crossed the pond three times before finally arriving with me. I had no idea what was in the package before I opened it – talk about good timing!

Marcus Hinton gave his line flag-bearer figure (here) a flag based on that of the 45th Line Regiment with the correct battle-honours engraved on it. If you zoom in on this picture you will see from Don’s stunning brush work that the lettering on the flag is exactly the same. Presumably Marcus decided to use the original master rather than inscribe a new one – fair enough as I doubt if he ever considered that someone as nerdy as me would be scrutinising his work so closely some 45 years later.

The figures will eventually be stripped and repainted (although I won’t be able to get that lettering to the same standard as Don’s) and given the honour of being assigned to the 1st Grenadiers of the Guard.
Posted by Stryker at 11:15 5 comments:
Labels: Guard, The Replacement Depot, Waffle 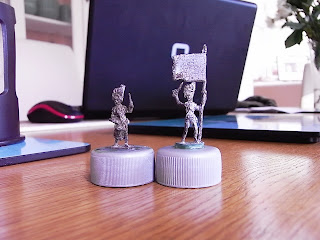 These are, I hope, two command figures for the 2nd Regiment of Grenadiers of The Guard. I say ‘hope’ because the drummer and flag-bearer are both suffering quite a bit from lead rot. This is an occupational hazard when trying to create a wargames army with figures that are sometimes up to 50 years old.

Now I am no chemist (ungraded at ‘A’ level – quite a feat!) and I know we’ve touched on this topic before on this blog but, as far as I can make out, lead rot is an oxidizing process possibly helped along in this case by the figures being dunked in chlorine to remove the old paint. Mostly the metal just looks a bit tarnished but in places there are deposits of a white powdery substance.

In the past my remedy has been to brush off the powder as much as possible and then basically ignore the problem and apply a black enamel paint undercoat as usual thinking that once the figure is sealed it will stop any further oxidization. However, this kind of thinking (rather than taking a scientific approach) may be just the reason that I got that ‘ungraded’ result, so do any of you boffins out there have any other suggestions?
Posted by Stryker at 08:56 8 comments:
Labels: Guard, The Replacement Depot, Waffle 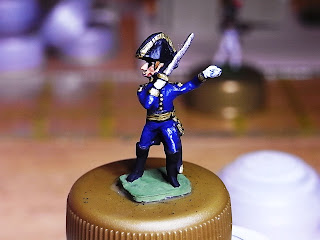 Cambronne’s military career began in 1792 and he fought his way through the entire Revolutionary War as well as the Napoleonic Wars. He took part in many campaigns including the ill-fated French expedition to Ireland in 1796, the Peninsular War, the invasion of Russia and the battles of 1813-14. He was wounded at Waterloo but survived and married his English nurse – he died in 1842.

Tradition has it that when called upon to surrender at Waterloo (whilst commanding the remnants of the Old Guard) he replied ‘The Guard will die, but will not yield’ but was then wounded in the head and taken prisoner. In Les Miserables, Victor Hugo attributed Cambronne with a more colourful response although Cambronne himself said his actual words were ‘Buggers like us never surrender’.

This is FN367 GENERAL CAMBRONNE, in General’s uniform and cocked hat on foot, with drawn sword and waving arm. The figure is a genuine vintage casting of the only foot figure to be included in the Hinton Hunt personality figure range.

Note: I've tried to tone down the 'Mr Punch' look but the size of the nose on this casting has made that quite difficult.
Posted by Stryker at 10:27 8 comments:
Labels: French, General Staff, Guard

Looking back through my previous posts I see that I started work on painting the 9th legere in December 2012. Even by my standards this is very slow progress but I can now confirm that the unit is finally finished, based and ready for action. 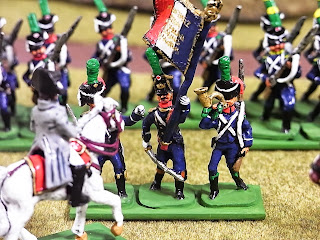 The Emperor presents the 9th legere with their eagle. 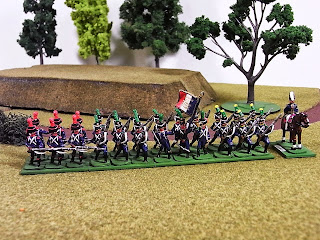 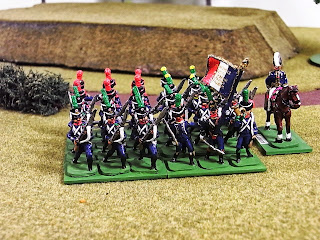 ...then column of attack 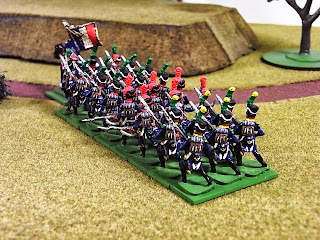 ...and finally column of march.

This leaves the painting desk free to start work on the Old Guard grenadiers. I have two units of 24 figures to do and being realistic they will probably take me a year to complete. With any luck though I’ll have at least one unit ready the next time those Russians put in an appearance.
Posted by Stryker at 08:50 10 comments:
Labels: French, On Manoeuvres

This is FN367 GENERAL CAMBRONNE, in General’s uniform and cocked hat on foot, with drawn sword and waving arm who last made an appearance on this blog here back in 2008. 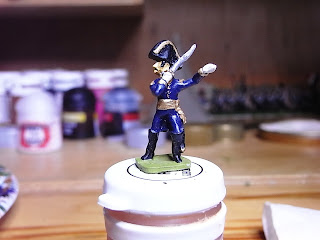 I acquired this figure from Tony who told me that he bought it ready-painted direct from Hinton Hunt back in the 70’s. When it arrived he was very disappointed with the standard of the paint job saying that the face of the figure was more reminiscent of Mr Punch than that of the famous French General Cambronne. In fact he was so disappointed that he ended up pretty much repainting it. Hinton Hunt Figures offered all their 20mm range for sale ready-painted and as a twelve-year-old I remember wishing I was rich enough to buy a whole army of them. However, at 88p (equivalent to £9.82 now) for infantry figures and £1.76 (equivalent to £19.69 now) for cavalry figures this had to remain a pipe dream so I was quite pleased in a way to find out that I hadn’t really missed out on much. 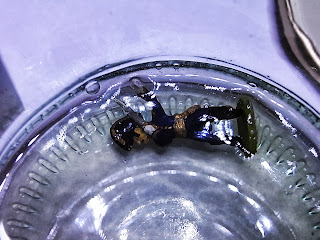 Anyway, the time has finally come for Mr Punch to be consigned to the jar of bleach to have his old paint removed as I thought it fitting to paint him first before moving onto my first unit of Old Guard grenadiers – and not before time I hear you say.
Posted by Stryker at 21:00 7 comments:
Labels: French, General Staff, Guard 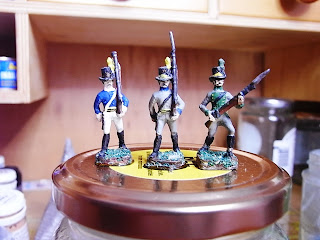 No, this is not a plug for IKEA this is an attempt to find suitable caring homes for the hundred-and-fifty or so 20mm Swedes I have packed away at the very bottom of the lead pile. Now I’ll make the point right away that these are NOT genuine Hinton Hunt castings they are figures based very closely on Hinton Hunt SW4 Swedish private charging & SW7 Swedish private marching and were produced in the US by an unknown maker – probably in the 70’s or 80’s.

I bought them rather naively in a job lot about six years ago (at the start of this project) in the hope that they would contain at least some genuine figures but sadly this was not the case. I did refurbish three units in an attempt to convince Mrs S I was thrilled to have spent our cash on them but lost enthusiasm to do any more (well, how many Swedes do you need?).

The castings I have available are good and flash free and have a very basic faded paint job (as pictured). Some of the figures were ‘converted’ to Jagers by the original owner who cut off their bayonets. The annoying thing about them to a purist like me is that the bases are overly thick being about 3mm which makes them look big stood next to their genuine brethren (Roy has suggested that I file the bases down but life is too short). Having said that, the figures that I refurbished have done surprisingly well in action (even though I usually rate them as ‘C’ grade) – click here to see what I mean.

UPDATE - THE SWEDES HAVE ALL GONE TO A NEW HOME...
Posted by Stryker at 12:23 9 comments:
Labels: Swedes

The Eagle of the 9th 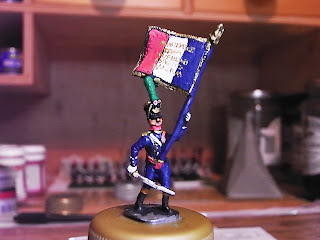 No, I haven't come across a whole load of Hinton Hunt Romans (although wouldn't that be nice?) I am referring instead to my completed Eagle-bearer for the 9th legere. This is the third one of these figures that I have painted for this project (there is a fourth one that Matt did for my Swiss for which I am eternally grateful) and I noticed whilst tackling this one that my eyesight is definitely deteriorating because I found it a bit of a struggle painting on the battle honours.

Marcus Hinton went to all the trouble of inscribing the honours Austerlitz, Friedland, Essling, Jena and Wagram on the flag of this model and I have faithfully tried to pick out the lettering each time I’ve painted one. While peering through my specs and magnifying glass and trying to apply gold paint with a shaky hand, I was reminded of the character Alfred E Neuman from MAD magazine in the 60’s and his line “anyone crazy enough to read this is crazy enough to inscribe the words 'What me worry' on the head of a pin”.

The figure is FN4 Colour bearer charging. Click on the image to zoom in and see the lettering on the flag!
Posted by Stryker at 16:07 15 comments:
Labels: French
Newer Posts Older Posts Home
Subscribe to: Posts (Atom)