Born in 1768, Padget commanded a regiment of volunteers in Flanders in 1794 and went on to lead a cavalry brigade in Holland in 1799. He became colonel of the 7th Light Dragoons and was appointed commander of the cavalry under Moore in the peninsular at the end of 1808. He conducted a skilful rearguard action during the retreat on Corunna (during which he captured the French commander Lefebvre-desnouettes). 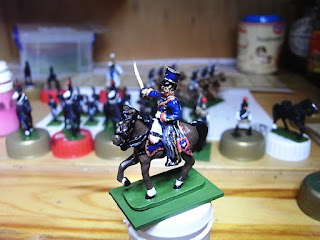 Padget never returned to the peninsular to fight under Wellesley and this may have been partly due to the fact that he eloped with Wellesley’s sister. Bruce Quarrie in his book Napoleons Campaigns in Miniature says “In a wargames campaign I strongly recommend the British player bend the rules slightly and appoint him (Uxbridge) cavalry commander under Wellesley in Spain”. I’m not sure if Sir Stapleton-Cotton would have agreed with this suggestion. 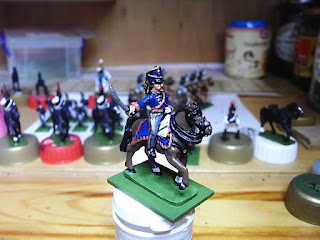 During the 100 days campaign Padget, now Earl of Uxbridge, commanded the entire Anglo- Allied cavalry contingent and was second in command to Wellington. His magnificent rearguard action following Quatre Bras was perhaps the high point of his career. He famously lost a leg to a stray cannon ball during the closing phase of the battle of Waterloo. Padget lived on to become Marquis of Anglesy and a Field Marshal, he died in 1854. 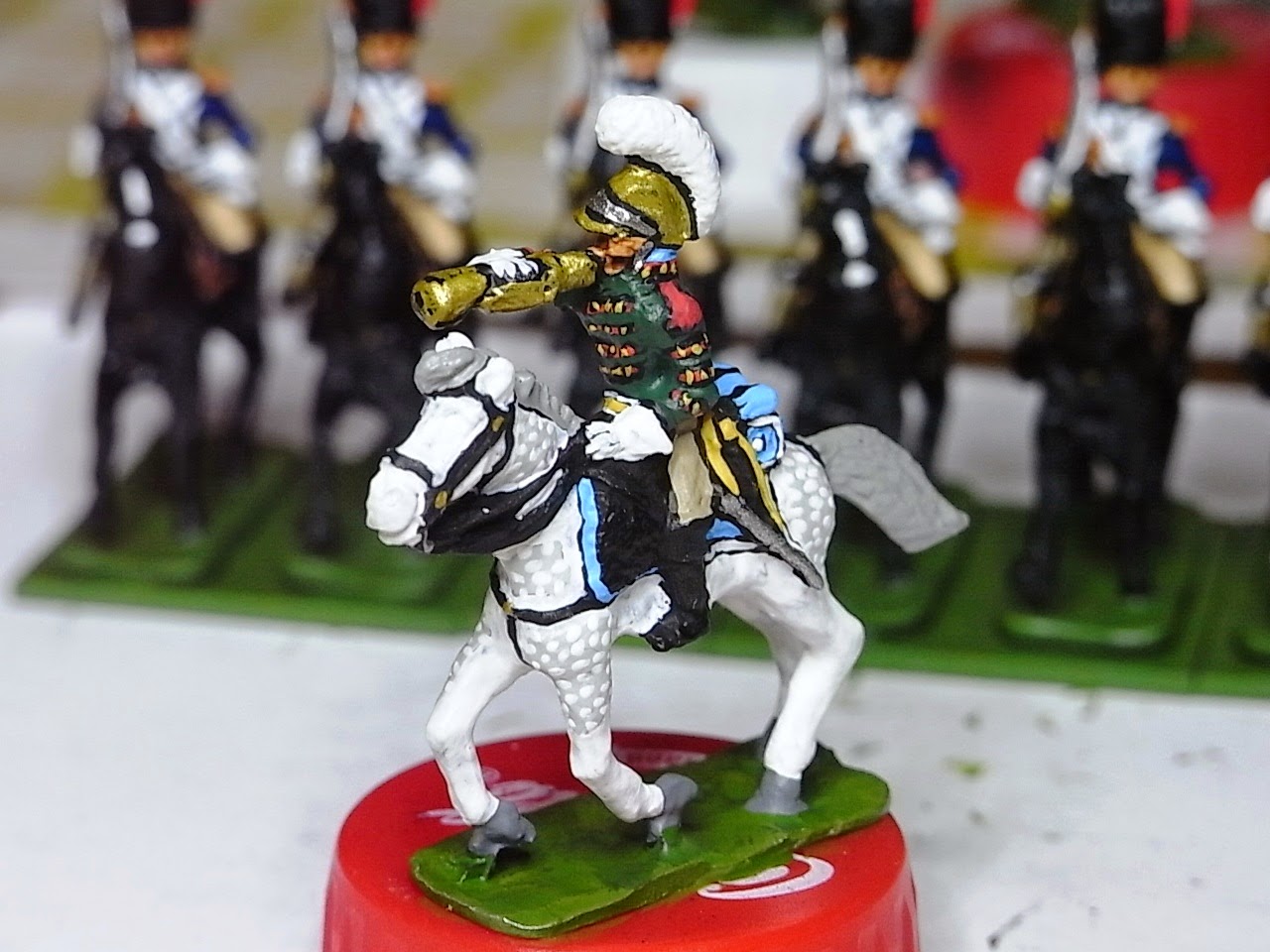 One of the very first batches of figures I acquired at the start of this project were some vintage French Carabiniers. The figures were a mixture of the one-piece casting FN/106 and the two-piece version FN/311 (horse FNH/5). One of the castings had been converted by the previous owner into a trumpet player. This had been quite neatly done by removing the carbine and cartridge box and adding a wire trumpet.

Having decided with Roy that we would change the establishment of cavalry regiments to 12 figures (rather than 18) I decided to add to my existing squadron of 6 Carabiniers to bring them up to regimental strength. It was then that I remembered 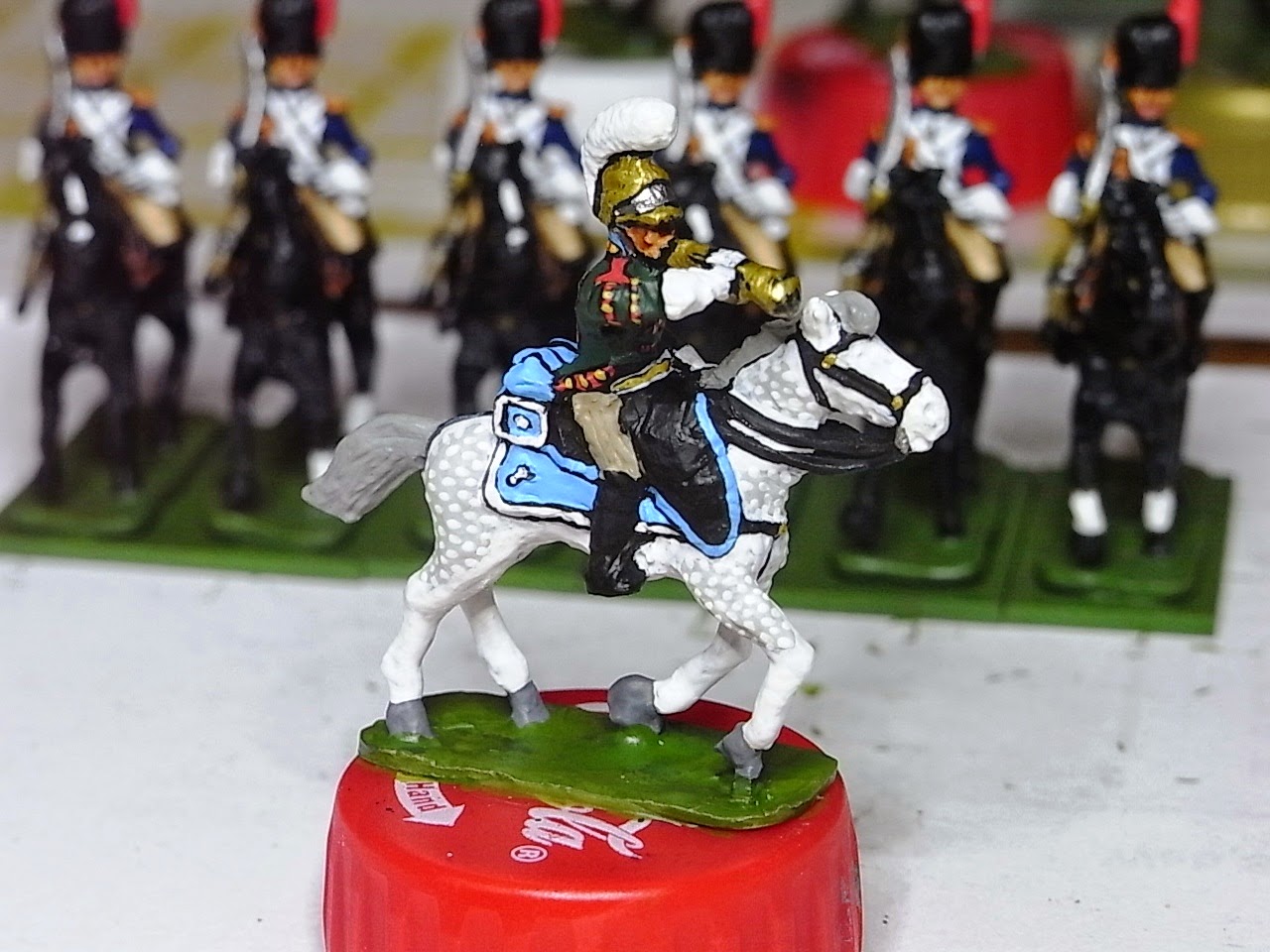 the trumpeter languishing in the box of spares.

Eight years ago I would have frowned upon the idea of mutilating an original Hinton Hunt figure but I’ve since mellowed and even dabbled in the dark art of conversion myself. I’ve had great fun restoring (bits of the trumpet fell off in the bleach) and painting this figure and finally got some use out of my copy of Osprey’s Napoleon’s Carabiniers.