It’s taken slightly over two months but the Young Guard are finally finished. This unit has been a labour of love involving some serious flash removal and running repairs plus conversions and flag painting by Matt B as well as concentrated painting on my part. 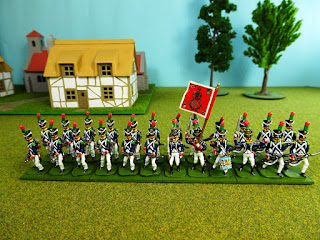 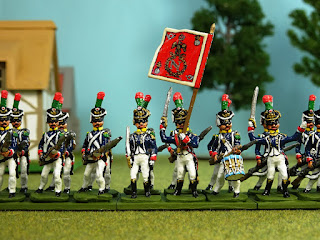 Most of the figures here were vintage ones that the original owner bought direct from Marcus Hinton in 1965 (the remainder are Clayton’s). They had never been painted so the job of getting them table ready fell to me some half a century after they were cast - I hope I’ve done them justice. 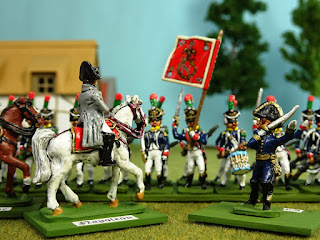 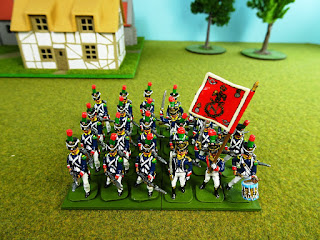 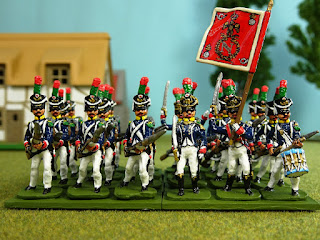 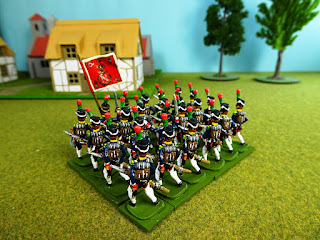 One other unit finished this week was a Boer War British one painted for me by Matt G – click here to take a look on my Boer War in Miniature blog.
Posted by Stryker at 15:39 21 comments:
Labels: French, Guard 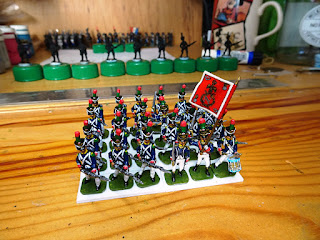 I’m falling a bit behind schedule on getting this unit fully finished. Last night I cut the plasticard bases and went through the frustrating process of trying to get the figures glued on in such a way as to allow the ranks to close up. This is always awkward with charging figures as they have to be angled so that the ranks can fit together in any combination.

During this process it became apparent that there are subtle differences between some of the castings. I’m not sure how many different production moulds there would have been in use by Hinton Hunt at any one time but I know I received figure variations within the same deliveries back in the 70s. Mostly these were variations in height and thickness but sometimes the body is slightly twisted.

Anyway, they are now firmly stuck in place with superglue and the final phase of production will be to paint the bases green. This is also quite a frustrating process as the quality of Humbrol paints is now so poor it will require three coats to cover properly. Once that’s done they will fall in again in front of the Emperor to ‘officially’ receive their colours.
Posted by Stryker at 11:54 21 comments:
Labels: French, Guard 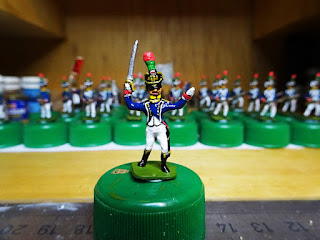 Well, I did say I hoped I’d have them finished by the middle of February at the latest and I’m not all that far off – just three figures left to paint. However due to the fact that we have a couple of visitors over the next week (my hobby space is in the guest room) I may just miss that deadline.

This is the final officer figure for the unit gleaming under a coat of wet varnish - he is FN/70 Young Guard Officer (charging). There is a note in the Hinton Hunt catalogue that says “The Young Guard Officers FN/70 and FN/74 had the same patterns of uniform for Tirallieurs and Voltiguers, only the colouring differed”. This is quite handy although of course I have painted mine as Voltiguers.

Once the unit is completed and based I’ll try to get some decent pictures of them.
Posted by Stryker at 20:59 11 comments:
Labels: French, Guard
Newer Posts Older Posts Home
Subscribe to: Posts (Atom)