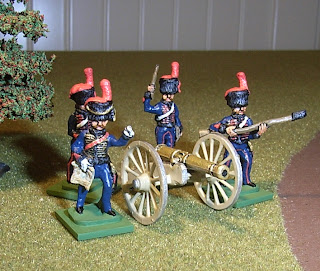 At last I have finished my French Imperial Guard Horse Artillery crew. These figures are all vintage Hinton Hunt castings that I stripped and repainted. The gun is a plastic one from the Revell set.

I am really pleased with the way they turned out. Many years ago I painted this exact set of figures (in fact they were the last HH I painted back in the 1970’s) and I was disappointed with my effort then. I didn’t have the right colour blue and I made a bit of a pigs ear of them. These ones on the other hand look darn good even if I do say so myself. The figures are:

Original HH artillery models are pretty rare but even if I had one I probably wouldn’t use it as they are under sized for the figures. It would be undignified for these fine Guardsmen to have to stoop down to fire so I am not too bothered about the plastic substitute.
Posted by Stryker at 19:15 2 comments:
Labels: Artillery, French 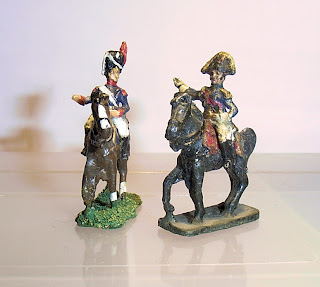 Yes, you guessed it – still no new painting so here are a couple more French Marshals instead. As with the others I will eventually strip the old paint from these figures and give them a new lease of life, just not sure when.

The chap on the left is General Dorsenne (FN360 on horse FNH10) not a Marshal strictly speaking but he did rise to command the Imperial Guard in 1809 so that’s good enough for me.

On the right is Marshal Massena (FN356 on horse FNH10) who was certainly one of Napoleon’s most able commanders. He performed brilliantly at Aspern-Essling in 1809 despite the fact that the Emperor had shot out one of his eyes in a hunting accident the previous year. In 1810 he drew the short straw being given command of the Army of Portugal. He actually did incredibly well against Wellington under the circumstances but Napoleon didn’t think so and forcibly retired him. Apparently he never forgave Napoleon for this although you think he would have been more miffed about the eye.
Posted by Stryker at 20:40 No comments:
Labels: French, General Staff 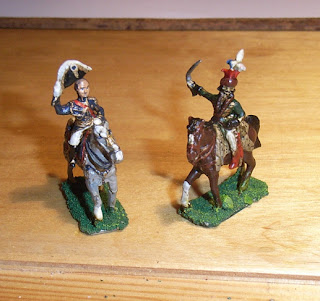 Here posing for the camera are Marshals Davout and Murat recreating the scene of their famous Hinton Hunt advert (see “The old ads are the best”). These figures form part of my French general staff currently awaiting a repaint.

Marshal Davout (FN355 on the left) hero of Austerlitz and Auerstadt. He commanded the rearguard during the retreat from Moscow. A solid, reliable all round good egg. Apparently he had very poor eyesight and, if this model is a good likeness, a touch of baldness.

Prince Murat (FN351 on the right) was a dashing cavalry commander who liked to design his own over the top uniforms. He had a good eye for ground but was not a brilliant strategist – Napoleon once called him a ‘bewildered idiot’ (according to Bruce Quarrie). Seems a bit harsh for such a flamboyant character.

If I had lived in Napoleonic times I would have liked to be a dashing Murat type. Sadly I more closely resemble the balding and bespectacled Davout.
Posted by Stryker at 19:06 No comments:
Labels: French, General Staff
Newer Posts Older Posts Home
Subscribe to: Posts (Atom)