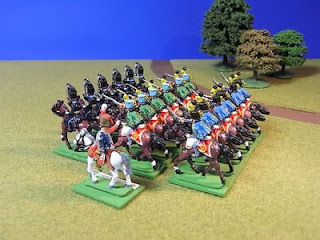 Those of you who have read my house rules Muskets & Marshals will know that my cavalry units consist of three squadrons each of six figures. It has proved almost impossible to collect any set of eighteen identical cavalry figures so instead I have formed composite units that I loosely term Brigades.

The completion of the Brunswick Hussars a few weeks ago has led to the formation of the first Allied light cavalry Brigade. This unit is made up of two squadrons of Austrian Hussars (from the Blankenstein & Vecsey regiments) and the squadron of Brunswick Hussars. Command of this impressive force has been given to Stapleton Cotton and he is very proud indeed to receive such an honour.

The Austrian Hussars were originally in the collection of American wargamer Don who also painted them. The detail of the slung Pelisses is very fine and they make a colourful contrast to the black of the Brunswickers.

Work is ongoing on the French light cavalry Brigade but has slowed somewhat in recent days. It now looks as if the Polish lancers will not be finished in time to meet my April painting quota.
Posted by Stryker at 09:25 10 comments:
Labels: Austrian, Brunswick, Light Cavalry

Walking Charmy Down (Off Topic #18)

Last Saturday my walking companion Andy took me for a hike up to Charmy Down to an old disused wartime RAF airfield on the outskirts of Bath. We parked the car at Batheaston and started by climbing up Solsbury Hill. 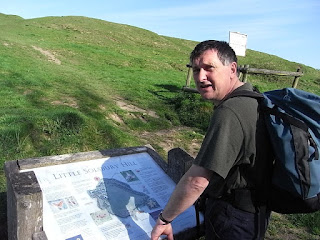 Andy looks for information on the whereabouts of his hero Peter Gabriel.

As we climbed up the hill we really did see an 'eagle fly' and would have easily seen the 'city light' if it hadn’t been daytime. Andy told me he had been to several Genesis gigs in his youth, which impressed me because I never did and would quite like to have done so. 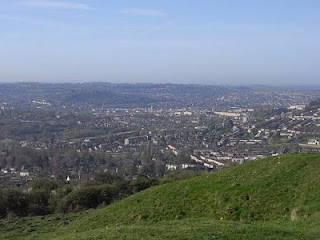 As we slowly descended Solsbury Hill into the valley below I realised that we could see Freezing Hill on the horizon. This linked quite nicely into our last walk at Lansdown. 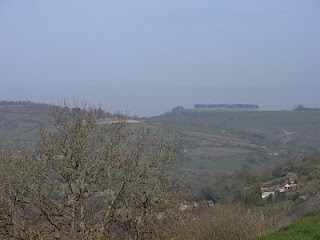 We then walked through some very spectacular countryside enjoying the unseasonably warm weather. From the valley we began to ascend again towards Charmy Down, the last bit of the climb involved negotiating a set of steps built into the hillside - a very steep climb. 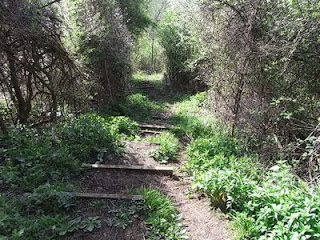 A steep climb – looking down the steps.

Eventually, after passing near a small farmyard and getting slightly lost we emerged on the edge of the old airfield. The first thing I noticed was a line of four pillboxes built for defence. The structures were in amazingly good condition considering they were abandoned in 1946. It reminded me how as a kid growing up in the sixties pillboxes were still a common sight around the landscape of southern England. 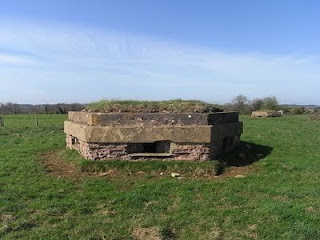 Pillboxes on the airfield perimeter.

We sat on top of one of the pillboxes to eat a snack. No Eccles cakes this time but Andy had brought some rather superior fruitcakes instead. 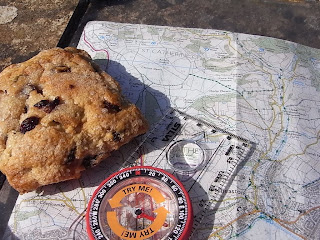 Walking on across the airfield we took a bit of a detour off of the public footpath to get near to the Control Tower. We didn’t manage to get right up to it but the building looked surprisingly complete after 65 years. 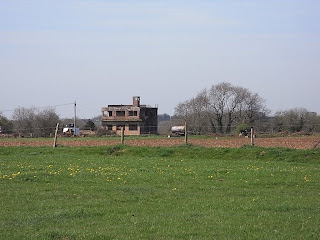 The Control Tower at Charmy Down Airfield

After passing through a herd of cows and the remains of various unidentifiable brick structures (some surrounded by large banks of earth) we came eventually to the area that probably housed the accommodation blocks. Beyond this was a large field containing at least nine separate well spaced out brick built stores. These must have been used to store ammunition and they were in very good condition still having intact roofs. 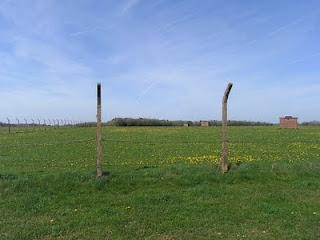 Moving on we re-joined the public footpath that after five minutes or so led to the most interesting find of the day. This was a large brick built U-shaped wall that was apparently used as a sort of firing range where the cannons in the fighter’s wings could be calibrated. 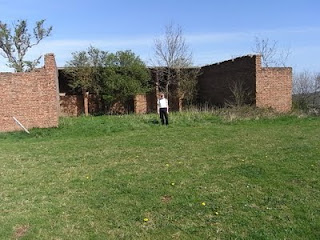 The “firing range” – this thing is big.

We continued along the footpath and eventually came down into the valley at Northend where we followed the line of a brook back to where we had parked the car. The walk took about five hours but we spent at least an hour and a half up on the airfield.

Charmy Down Airfield was an RAF night fighter base between 1940 and 1943 when it passed into the hands of the USAAF who also used it primarily for fighter aircraft. The Airfield was abandoned in 1946. 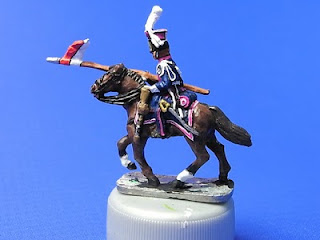 It’s taken me three painting sessions to get this one the way I want him to look. I always paint a test figure prior to mass-producing a unit because these Hinton Hunt castings can be very tricky customers. I’ve mentioned before that sometimes a piece of detail I carefully follow with the brush just suddenly disappears in a disconcerting way (I had a similar experience once driving through Spain when the road suddenly disappeared but that’s another story).

In this particular case one of the straps to the sword scabbard turned through 60 degrees and ended up in the middle of nowhere. At first I thought maybe it was some extra cavalry accoutrement that I’d never come across before but after thumbing through my various Uniform books I realized it was just a mistake in the sculpting. Interestingly (interesting in an Anorak sort of way) when I checked a *Der Kriegspieler casting of a Guard Lancer I found that it had exactly the same fault.

Anyway, after spending all of my hobby time this week fussing around with this one figure I must now move on to the more tedious task of painting up his five colleagues – all to be completed by the end of this month according to my rigorous schedule.

*Der Kriegspieler was a range of US produced figures contemporary with Hinton Hunt.
Posted by Stryker at 09:06 5 comments:
Labels: Guard, Light Cavalry, Polish

Those of you who have trawled back through my older posts will know that I like to finish off my figures by labelling the underside of their bases with their Hinton Hunt codes. The font I use is Old English that closely matches the font used in the original Hinton Hunt logo. 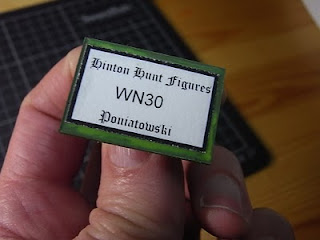 After nearly 4 weeks of waiting Poniatowski finally gets his label.

I also stick a name label on the top of the bases of my personality figures so there’s no mistaking them in the heat of battle. The labels are just paper printed from my LaserJet and stuck on with a glue stick. 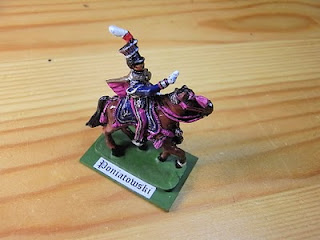 No mistaking this one!

So, as you have probably guessed, not much painting progress although I have just started on the first of those lancers.