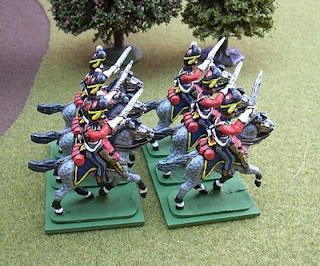 You may have grown bored waiting for them but here at last are my Royal North British Dragoons – the Scots Grey’s. Six troopers mounted on the finest dapple-grey horses I have EVER painted. The figures are all vintage Hinton Hunt castings of BN49 Scots Grey’s Trooper Charging.

The models are one-piece castings from the horse-attached series, which as I’ve said before are something of an acquired taste. Excellent little models that I really enjoyed painting – once I got over the dapple dilemma.


Napoleon was greatly impressed with the Grey’s when he saw them in action during Waterloo apparently exclaiming “Qu’ils sont terribles, ces Chevaux Gris”. Now, I gave up trying to learn French at the age of thirteen but roughly translated I think this means “those blokes on the grey horses look a bit tough”.
Posted by Stryker at 17:10 5 comments:
Labels: British, Heavy Cavalry, Scots 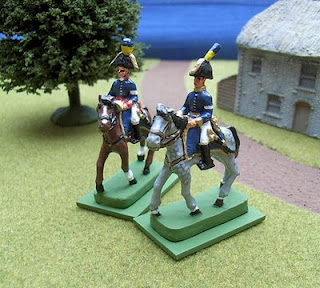 These are Generals Klingspor & Aldercreutz proud commanding officers of my Swedish army. Both figures are actually AN102 Austrian General mounted holding map from the horse-attached series. Mr A (riding one of my famous rocking horses) has had a new head fitted and the map removed from his hands. In common with my other Swedes I refreshed the original paint job on these rather than strip them and start again, although they were in a pretty bad condition so it ended up being more of a re-paint.

I received these lads with the rest of my Swedish army from the USA last year. Their origin is a bit of a mystery. They are not vintage UK castings and neither are they Clayton castings or the more obscure Der Kriegspieler Napoleoniques. There are quite a few knock-off Hinton Hunt figures about and most of those were produced in the USA so it’s fairly safe to assume that someone slaved away over a hot kitchen stove to make these from original figures – I wonder if they felt guilty? Although not official castings they are probably at least 20 or so years old and the quality is good. The only annoying thing about them is the extra thick bases which make them taller than their genuine comrades.

Messer’s K & A look a bit glum possibly because they have only just heard that Russia has knocked Sweden out of the Euro 2008 football competition. Perhaps a new Russo-Swedish war is in the offing?

For more on my Swedes click here.
Posted by Stryker at 14:43 2 comments:
Labels: General Staff, Swedes

Off Topic #3 - Making men out of boys 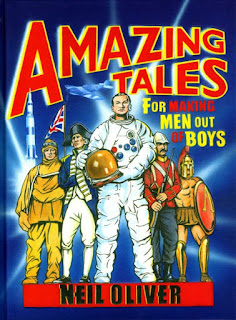 We have just returned from a holiday in the Emerald Isle where my reading material for the week was a copy of Neil Oliver’s excellent new book Amazing Tales for making men out of boys. I came across this book by chance and have thoroughly enjoyed it and have a sneaking feeling that many readers of this blog will enjoy it also.

Oliver is known here in the UK for his TV appearances in the BBC’s Coast and the Two men in a Trench series of programmes. What truly amazes me (no pun intended) is that his book is totally un-politically correct lamenting the emergence of new men and championing tales of what he describes as manly men. Each chapter has a highly readable tale of daring-do focusing not just on the deeds of those such as Nelson, but also on some of the more obscure figures and events in history - the stand of the French Foreign Legion at Camerone and Ernest Shakleton’s voyage across the Southern Ocean in an open top boat to name just two.

What has given me heart is that Oliver is a good ten years younger than me so cannot yet be categorised as an old git. His story telling reminds me of my 1960’s Junior School textbook called People in History that really fired my imagination and life long interest in History at the age of nine or so. The sort of book that would never find its way into a school today!

Great stuff, buy a copy and immerse yourself in the age of manly men (after you’ve first done the washing up, made the tea, changed the baby etc.).

I promise now to get back on topic…
Posted by Stryker at 08:52 2 comments:
Labels: Off Topic 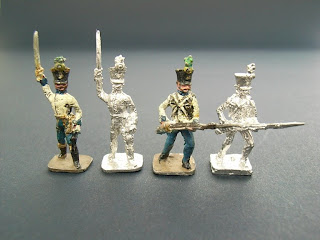 Over the last few days I have been lucky enough to receive over 100 Hinton Hunt castings produced by David Clayton in the USA (thanks Clive). Clayton acquired the Hinton Hunt moulds back in the early 90’s and was producing and selling the figures up until a few years ago.

My stated aim at the start of this project was that I was going to build my armies using only vintage figures but the reality of the situation is that I am going to have to use some of the later castings to complete my units. There seem to be a reasonable number of vintage British and French figures around but some types are just too rare for me to stand a chance of building whole 24 figure units. The Austrians are a case in point – I have 16 or so vintage figures but I had given up hope of finding any more to make up a full unit. I now have enough extra charging figures to make up the ranks.

The picture shows two each of AN21 Hungarian Officer Charging and AN24 Hungarian Musketeer Charging. The painted figures are vintage ones and the unpainted ones next to them are Clayton castings. I was pleasantly surprised at the quality of the figures. The Clayton officer is almost identical to the vintage one whilst the musketeer, apart from being a slightly lighter metal, only differs in that the base is square without the normal rounded corners. What really surprised me is that the USA versions both have the full Hinton Hunt figure codes marked under their bases. I had previously thought that Clayton’s figures had no codes and often used this as a way to determine if a figure was vintage or not – so it’s back to the drawing board on that one.

Ironically of course, the Clayton figures themselves are now becoming rarities. He told me he sold the moulds to a mysterious (my word not his) Canadian bloke who apparently has plans to market the figures again. For the full Hinton Hunt story check out the link to Harry Pearson's superb Vintage20mil site.
Posted by Stryker at 19:53 7 comments:
Labels: Austrian, David Clayton Figures
Newer Posts Older Posts Home
Subscribe to: Posts (Atom)