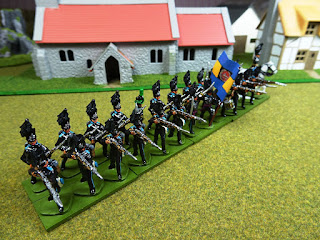 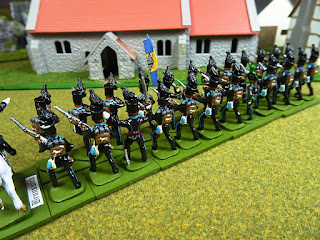 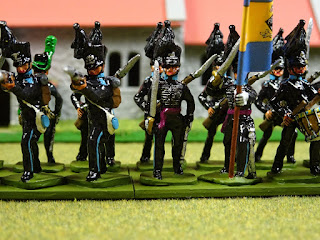 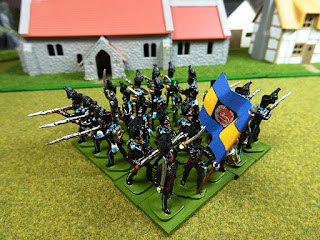 As a dog lover I won’t be stationing my Brunswickers anywhere near the 95th Rifles. The story goes that they had a liking for dogs (but not in the British way) and ate the mascot of the 95th, a dog called Rifle, who had survived shot and shell only to be “devoured by the insatiable jaws of the Brunswickers”.
Posted by Stryker at 20:20 16 comments:
Labels: Brunswick

Since painting the Black Duke I’ve been slowly plodding away at the Brunswick Leib-Battalion to give him something to lead and/or rally. I’ve always wanted to have a unit of Brunswick infantry and these figures (acquired back here) have been waiting way too long in the painting queue.


Half the unit will be made up of BRN/5 Private (firing), and the other half are BRN/4 Private (charging). There will also be a smattering of officers including one from the Avant Garde just to spice things up.


I’ve just passed the halfway mark and the reasonably rapid progress (for me) is helped somewhat by the black uniforms. Although, having said that, there is some fiddly detail like the horses painted on the packs. The uniform colour is a 50:50 mixture of black and Foundry 34B which gives a subtle difference between the coat and the cross-straps although that may not be easily seen in the photos.
Posted by Stryker at 19:29 23 comments:
Labels: Brunswick

For some reason I couldn’t resist the urge to re-base the buildings in my village. This involved removing the models from their single A4 size base and putting them on individual bases which was in line with my original concept (click here). I must admit that this work was carried out without planning permission or any consultation with the residents. 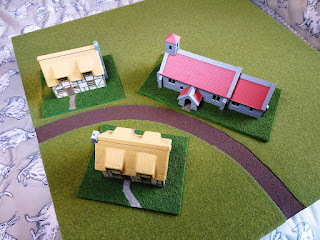 The three buildings can still be arranged together as a single built-up-area, but it gives me the flexibility to use them individually as well. 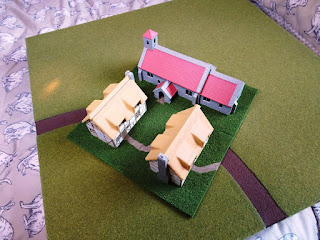 Something else I couldn’t resist recently was splashing out and buying 96 French infantry from the 1807-12 range. This was a bit of a punt as I couldn’t be sure from the photos if they were vintage Hinton Hunt or not as the seller had miscaptioned them. For once I got lucky as all the figures turned out to be vintage castings in good condition except for a dozen or so broken bayonets.


At a stroke this gives me a full division (three units in my organisation) of French infantry but also undoes all my progress this year - figures painted vs figures acquired. However, vintage stuff doesn’t come along all that often and certainly not at a half decent price and these reinforcements do sort of fit into my long-term plan for this project.
Posted by Stryker at 13:36 14 comments:
Labels: French, Scenery

I had a few hours spare yesterday so decided to play a small solo game. It was a chance to get a few of the figures out of the display cabinet and put them through their paces. The scenario was simple enough – a small allied rear-guard was attempting to hold off a larger French force.


It was a fun little game that enabled me to iron out a few details about the use of skirmishers. I really should give the British a run out next time.
Posted by Stryker at 20:05 12 comments:
Labels: Playing Soldiers
Newer Posts Older Posts Home
Subscribe to: Posts (Atom)