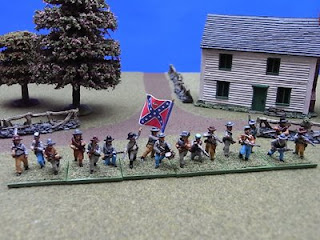 I have been distracted for the last few days into painting this small Confederate brigade for Fire & Fury. You may recall that I am slowly (very, very slowly) assembling enough forces for an ACW scenario based on the fight for Henry House hill. I already have most of the Union forces and Henry House itself but no hill and only a handful of Rebels.

The figures are the superb 15mm ones produced by AB Figures although I began this project so long ago I actually bought them from Polly Oliver (whatever happened to the lovely Polly Oliver AWI range?). My technique is pretty basic using black undercoat and block colours in much the same way as I paint the Hintons. I’ve never really got to grips with shading on 15mm figures, in fact I’ve never really got to grips with shading at all but I have introduced a bit of wash over the flesh on these lads as it’s an easy and effective way of bringing out the detail. 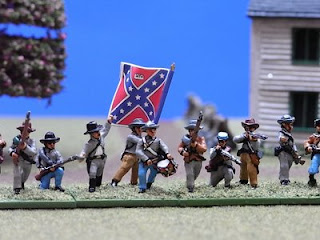 Being a dyed-in-the-wool Union man I’ve painted hundreds of the boys in blue over the years but very few of these butternut and grey types. I have to say I actually quite enjoyed doing them although I would never dream of commanding such a rabble in a tabletop battle.
Posted by Stryker at 09:59 4 comments:
Labels: Off Topic 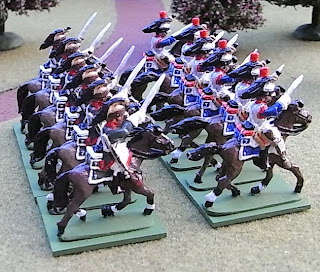 Here are a few more of Don’s figures newly refurbished and rebased by me. Don actually pointed out that if I just soaked the bases of the castings in water the old textured material on them would come away quite easily. Well it did and this method was much less destructive than my previous one involving a Stanley knife, various files and a small charge of TNT.

All these figures are by the USA maker Der Kreigspieler. As mentioned before they bear a spooky resemblance to Hinton Hunt and at first glance it can be easy to mix the two up. When I first came across examples of this make at the start of my project I considered them lowly impostors not worthy to stand in the ranks of my Hintons but I have changed my opinion a little since then especially after I realised they were contemporary with HH. These particular ones are:

Der Kreigspieler were based in Dayton, Ohio and were fronted by American gamer Duke Seigfried. Apparently he had the idea of trying to make figures cheaper by selling them by the bag way back in the 60’s and 70’s. Another innovation ahead of it’s time was the inclusion of figure variations within the same code (the Cuirassiers in the picture have two horse types). The castings tend to be rather weedy with poorly defined detail when compared with their HH or Clayton brethren but they have a certain charm to a hardened Hinton Hunt nut like myself – others not looking through such rosy specs may be less enamoured. Anyway, as I’m short of HH French heavy cavalry these lads are a welcome addition to combat the growing strength of the Allied horseman they now face.

Thanks to Don & John for the background info on DK and to John for his help with the DK code numbers.
Posted by Stryker at 15:50 10 comments:
Labels: Der Kreigspieler, French, Heavy Cavalry, Waffle 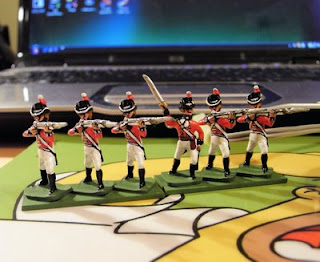 I had a little mishap with the digital camera and although it only bounced once it didn’t really want to work anymore after hitting the floor. Mrs S was surprisingly understanding (it’s her camera) and returned from a trip to the shop we bought it from with a newer better model – apparently we had a two year guarantee and she somehow managed to convince them to replace it.

This is one of my first shots with the new camera (the wrist strap was firmly attached throughout) and I haven’t quite got the hang of the settings yet, hence it’s just a tad blurry. The subject matter is the results of my painting over the last week namely a company of Royal Marines. The figures are vintage Hinton Hunt castings of:


You may remember that I already have 6 other Marines and a Company of Seamen that I painted some time ago. They were done before I decided to go for 24 figure infantry units in my army which left me 6 figures short. My Christmas figure haul included some Clayton Seamen castings and this prompted me to get the rest of these lads painted up. The finished “Naval Battalion” will therefore be made up of 12 Marines and 12 Seamen.
Posted by Stryker at 19:03 8 comments:
Labels: British, Marine 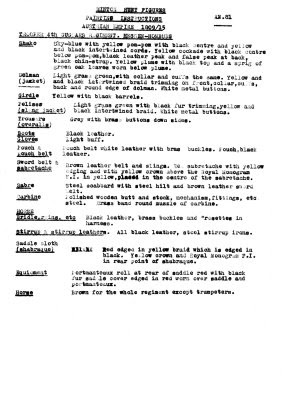 I recently received a batch of original Hinton Hunt painting instruction sheets from Don including this one for the Hussars I featured in my last post. Whilst perusing these Mrs S commented that, as they had been typed on a manual typewriter (long before the invention of the word processor) the copies were all created using carbon paper. This meant that each time an original was typed only a maximum of four or five copies could be made and explains why the paper is so flimsy.

I also have a couple of these sheets that are printed on normal paper and at first glace they look like photocopies but of course they can’t be as they date from the early 1970’s. Mrs S is sure that they were created using a stencil cut with a typewriter and then reproduced in a very messy duplicating process (she did this sort of thing at school apparently – glad I did woodwork). Making any corrections to either a carbon copy or a stencil is rather difficult so it’s no wonder there are a few typos on these HH sheets.

Well there you have it a little bit of office technology history. If you click on the image for a closer look and then take a glance at G & H on your keyboard, you will understand why they’re the 4th Gussars.
Posted by Stryker at 20:50 5 comments:
Labels: Light Cavalry, Waffle
Newer Posts Older Posts Home
Subscribe to: Posts (Atom)