The Battle of Zwettl – Scenario

We have our first action of the campaign in the hills north of the Danube near the town of Zwettl. An Austro-Brunswick force has stumbled into the column of Prince Poniatowski and Eugene as they advance eastwards. In panic, General Gyulay and the Duke of Brunswick throw together an ill-conceived plan to attack the French rather than withdraw or surrender.

This will be an interesting fight with such an imbalance of infantry and cavalry between the two forces. The French have a slight edge being closer to the VP locations than the Allies, but this will be offset by the superior mobility of the Austro-Brunswick force.

Third Battle of the Hut

This week Tony, Nigel and I assembled once again in the Hinton Hut to play a game of Muskets & Marshals. It was another attack and defence game with me commanding a French army that was slightly smaller than the combined attacking Austro-Russian and Prussian armies. In total there were just over 800 Hinton Hunt figures on the table, all from my own collection.

This is how the action went.

The run of bad luck for the emperor continues – I really should paint up some more French infantry.

Another highly enjoyable game and my thanks go to my visiting generals for their company and for soundly beating me yet again!

Posted by Stryker at 20:30 22 comments:
Labels: Battles in the Hut, Playing Soldiers

A walk in the (artillery) park

Wellington, Napoleon and Blucher have been inspecting the artillery park.

Meanwhile there are rumblings north of the Danube near the town of Zwettl where bizarrely the Austrians seem to have launched an offensive. 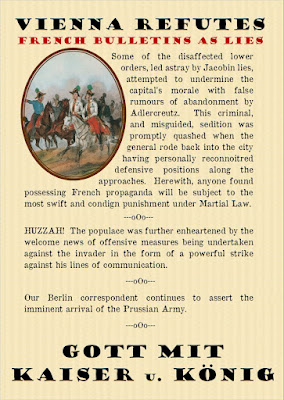 There may be a battle in the offing.

Unfortunately, for security reasons, I can’t tell you the current location of the emperor but suffice to say the Guard are watering their horses in the Danube. The French army is making steady progress eastwards and hopes to catch sight of the spires of Vienna very soon. 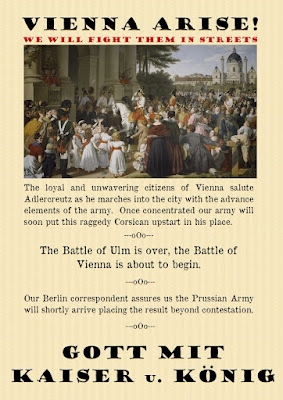 The Austrian PR machine is cranking out stirring proclamations about defending Vienna however it’s seeming increasingly likely that Mack is continuing his retreat, possibly in the hope of joining the Prussians although there is no firm news yet as to whether they have mobilised. No matter, it will be less work for us to defeat them all in one great battle!