Last Saturday we convened at Tony’s for a re-fight of the Battle of Neumarkt using his C&CN variant Ramekin rules. Tony has already posted on the game here so I'll just get straight to my own photos that hopefully captured the flavour of the day.

This was the biggest game we have tried so far (we had over 20 Austrian infantry units) and I think we learnt a bit in the process about how to handle such large forces, Tony touches on the issues around the deployment of reserves in his blog-post.

Thanks to Tony for all his efforts in designing the scenario and preparing the terrain, it was another enjoyable game played in great company.
Posted by Stryker at 20:34 7 comments:
Labels: Commands & Colors, Playing Soldiers 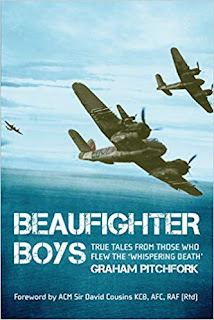 This book Beaufighter Boys by Graham Pitchfork has just been released by Grub Street Books. The author has compiled tales of Beaufighter crews illustrating the roles and theatres of war in which the aircraft was employed during WW2. The text is illustrated with plenty of black and white photos, many of which have never been published before.

Originally researched a few years ago but not completed until now, most of the accounts are written by the participants themselves or as a result of interviews with them. Sadly, the majority of these Beaufighter veterans have now passed away but their stories should appeal to anyone with an interest in the air war in WW2.

My father WO Dennis Spencer DFC is featured in chapter 22 of the book where he describes the techniques used to navigate at low level across the Burmese jungle, deep behind enemy lines (the extract is from his memoir Looking Backwards over Burma).
Posted by Stryker at 16:06 6 comments:
Labels: Off Topic
Newer Posts Older Posts Home
Subscribe to: Posts (Atom)