I was trying to finish the Russian infantry in time for a game at Goya’s next week, but various distractions have meant that’s no longer achievable. So, to distract myself completely, I’ve jumped ahead and painted a test figure for the next unit which will be the Pavlograd Hussars.

The figures for this unit came from two different sources and I can’t remember what they were. It’s clear however that these are not original figures and they have all had their plumes removed but are nice castings nonetheless.

I went for the Pavlograds purely because they had such a nice blue pelisse which will certainly stand out against the brown-coated infantry.
Posted by Stryker at 13:47 15 comments:
Labels: Light Cavalry, Russian 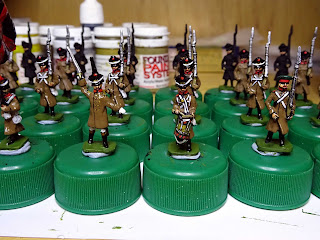 I’m making progress with the Russian infantry and am now at the halfway point of the unit. I had optimistically thought that painting figures in great-coats would be quicker than painting them in full uniform but somehow this doesn’t seem to be the case. I’m trying to get them finished for a game to be hosted by Goya next month, but I’m not sure if I’ll make the deadline.

I’ve also finally got around to making some minor changes to my rules Muskets & Marshals. I’ve changed the initiative rule as it seemed that too often cavalry was failing to counter-charge which seemed unrealistic. I’ve also updated the rules for fighting in buildings to reflect the system we’ve used in the last few games.

Muskets & Marshals 6.2 can be viewed or downloaded HERE.

A couple of weeks ago several lots of Hinton Hunt Russians came up for sale on eBay so I took a punt and bought one lot of 17 figures in great-coats (RN18). The figures turned out to be vintage ones in good condition with no broken bayonets although there was some pitting on the metal, but it was an easy enough job to fill these.


For the command group I carried out a couple of head swops putting Russian infantry heads on a Clayton Pavlov drummer and a French officer in greatcoat (FN11). I was planning on doing something similar for a standard bearer however Goya pipped me to the post by presenting me with a fully painted conversion of a DK Pavlov as a ‘hut warming’ present.


Goya also rustled up another headless Russian infantryman which brought the total to 18 following more surgery. I’m making up the ranks to a full 24 figures by adding 3 vintage Russian Crimea figures in cap (RC17), which is a good use for these as I don’t intend to raise any Crimean forces.
Posted by Stryker at 19:44 10 comments:
Labels: Conversions, Russian
Newer Posts Older Posts Home
Subscribe to: Posts (Atom)