This is the completed test figure for the proposed squadron of Prussian dragoons PN.81 Prussian Dragoon (mounted) charging. 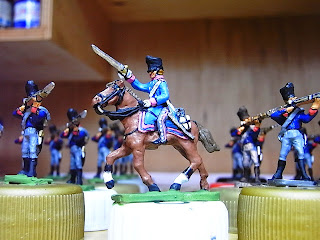 A trooper of the 6th Naumarkisches Dragoons (as per the Hinton Hunt painting instruction sheet).

I know I’ve said it before, but these one-piece Hinton Hunt cavalry figures can be very tricky to paint so I find doing a test figure before starting work on a whole batch of them is a good idea. Otherwise if I change my mind about something half way through (and I always do) I end up doing a lot of repainting. 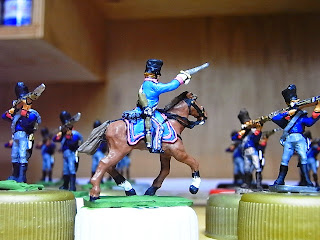 Painting the buttons on the trousers was a bit of a chore but they look fine viewed from a distance.

I never had any of these figures in my original 1970s army but I always fancied the idea of including Dragoons with their sky blue coats to break up the sombre look of the massed ranks of Prussian infantry.
Posted by Stryker at 09:00 9 comments:
Labels: Heavy Cavalry, Prussian

This week I started work on a test figure for a squadron of Prussian Dragoons and remembered that I had recently rediscovered a pot of Humbrol MC12 Prussian Dragoon Blue from the long defunct Authentic Colour range. I still have quite a few old Humbrol paints kept in air-tight plastic containers and this one must be about the oldest in my possession. 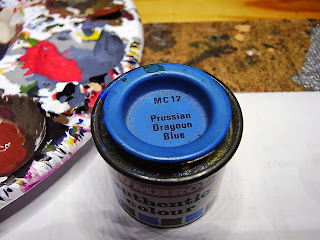 Like a find on a Time Team special my pot of Prussian Dragoon Blue waiting for the lid to be gently prised off by the hand of Phil Harding – or me in this case.

To the best of my recollection I bought it in 1974 along with a pot of Polish Crimson and British Rifle Green from the model shop in Bury St Edmunds (now also defunct). I can’t remember exactly why I bought them as I never had any Prussian dragoons, Polish troops or British riflemen in my armies at the time. It was probably simply because when I started painting toy soldiers in the late 60’s the Humbrol range was very limited (there wasn’t even a flesh tone) and I must have been excited to finally lay my hands on some ‘proper’ Napoleonic colours. 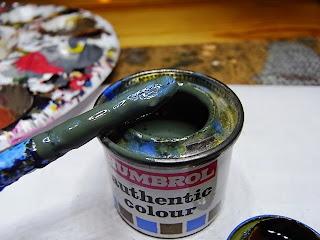 Not really surprising that the paint had turned to goo after 40 years – I hope this hasn’t happened to my 1974 Chateauneuf-du-Pape!

Anyway, as you can see, 40 years has proved to be just a little too long for this particular pot and the paint has congealed into a very smelly green sludge. Sad, but not totally unexpected, so I’ll be using Foundry Tomb Blue 23A instead.
Posted by Stryker at 20:19 8 comments:
Labels: Waffle 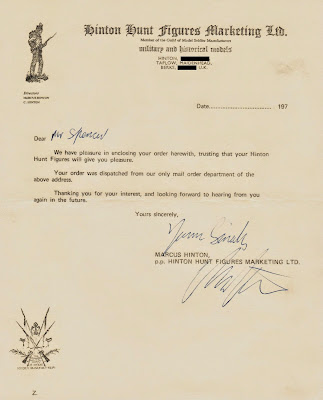 I was sorting through some bits and pieces when I came across this letter from Hinton Hunt Figures Marketing Ltd. It was enclosed with one of the orders of figures I received in the early seventies, probably 1973 or 1974. I can’t make out the signatures but I’m thinking that the bottom one may be by Marcus Hinton himself (click on the image to zoom in).

It seems likely that the letter came with the last order I made which may be why I stuck it inside my catalogue. That order was for French figures as by that time I had completed my Prussian army. As I recall I ordered several units of line grenadiers in the advancing pose, some guard horse artillery and possibly some one-piece cuirassiers.

The orders always arrived in a padded Jiffy bag with the figures wrapped together in newspaper or tissue paper. This wasn’t the safest way to pack such delicate items (Minifigs for instance came packed in sawdust in a stout cardboard box) and there were always casualties long before the figures reached the wargame table. I soon got wise to this and ordered a few extra figures to allow for breakages.

I never painted those French figures and they went the same way as the Prussians.
Posted by Stryker at 20:36 7 comments:
Labels: Waffle

Blue is the new black

So I’m back on track with the Prussians after my little Austrian interlude and as you can see I’m not doing too badly by my standards. I’ve almost finished 20 of the fusiliers and then have only 4 command figures to paint and I’ll have the whole lot completed. 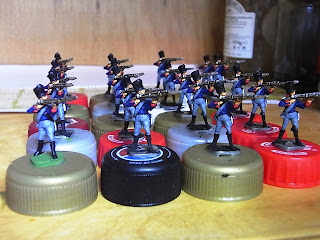 Now there was a debate a few posts back about Prussian blue actually being Prussian black according to the film Waterloo but then that film also showed French infantry armed with 1890 Russian bolt action rifles so perhaps (much as I like it) it may not be the best source of historical information. I paint my own Prussians with Foundry Deep Blue 20A which is the same blue I also use for the French. Prussian blue may well be correct but at normal playing distance the figures become too dark for my liking.
Posted by Stryker at 19:22 6 comments:
Labels: Prussian
Newer Posts Older Posts Home
Subscribe to: Posts (Atom)