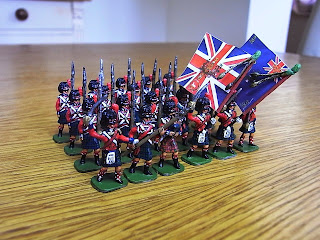 Somehow I’ve managed to finish painting the Black Watch in the record time of only three months! Actually, sarcasm aside, that really is quick for me considering the amount of tartan and other detail involved. Strangely I really enjoyed all the faffing about to produce this unit although I’ll say right here and now that this will be the only kilted unit I’m going to paint for this project.

I just need to finish the detail on the top of the flag poles and then base the whole lot up before they can take their place in the British order of battle ready for Vintage Waterloo.

According to Roy things are progressing well (only he could email me with the line “I found 24 painted Old Guard today”) and at some point in the next month or two we intend to get together for a dry run and to thrash out the details of the game.
Posted by Stryker at 09:33 14 comments:
Labels: British, Scots, Vintage Waterloo 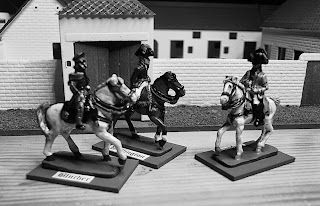 In a moment of madness the other day I suggested to Roy that we play a 200th anniversary Waterloo game this summer using our vintage figures. I envisaged a small affair of about eight or so units a side played out in a civilised style on Roy’s table. However, Roy has really taken to the idea and run with it and somehow the megalomania in both of us has escalated the thing into something potentially much bigger.

I say potentially because about a quarter of the units we plan to use aren’t even painted yet and many more from Roy’s collection will have to be rebased for use with my Muskets & Marshals rules. The figures will be a mixture of Hinton Hunt, Der Kreigspieler, Lamming and Alberken. Many will be genuine vintage figures and it’s possible of course that some of them may even have taken part in refights of the battle for the 150th anniversary.

We have a lot of work to do to pull this off (and by we I mean Roy) but we’ll give it our best shot and even if we don’t quite get to the epic proportions we’d like we will definitely play a Waterloo game of sorts that will eventually feature here on this blog. Only question now is who gets to be Napoleon?
Posted by Stryker at 19:38 9 comments:
Labels: Playing Soldiers, Vintage Waterloo 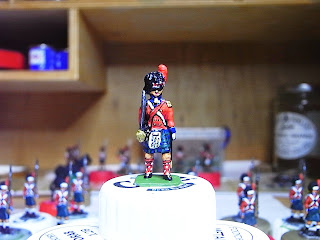 Work continues on the Black Watch at a slightly slower rate than I had hoped due to the real world intruding somewhat on my time. This is all the more frustrating as I’m really enjoying painting these figures having got over my tartan jitters; in fact I’m now in the happy position of having finished the tartan on all 24 figures.

This is a vintage casting of BN/37 Highland Officer (marching). In common with their other ranges Hinton Hunt produced two highland officer figures, one in the charging pose and one marching. I’ve included both types in this unit.

With luck I will have the whole unit finished and based up soon but I do still have all the hat bands and stocking tops to do on the last 12 marching infantry so bear with me.
Posted by Stryker at 21:32 12 comments:
Labels: British, Scots
Newer Posts Older Posts Home
Subscribe to: Posts (Atom)