With both my flanks broken it was time to concede defeat. It was a great game and another good test of the rules. This time I felt there was nothing to change in the rules other than the introduction of the initiative die roll. It's taken a while (I started in 1972) but finally I have a set of rules that I'm really happy with.

My thanks to Roy for yet another splendid game and lunch.
Posted by Stryker at 17:47 14 comments:
Labels: Battle Hanau 1813, Playing Soldiers

I've added some 'Unit History' pages (toward the top of the side menu bar). These are for my own amusement but might also be of interest to some of you. I will add to them as and when I have time.
Posted by Stryker at 20:34 9 comments:
Labels: Battle Hanau 1813, Playing Soldiers

I have to confess that I’d never heard of the battle of Hanau until Roy told me last week we would be playing a game based on it. I think his idea was to have a scenario where he could get to use his new Bavarian army and also throw in a few Austrian battalions for good measure (the 4 Austrian units are the precursor of Roy’s planned Austrian force for Vintage Leipzig). We used only a 6’ x 4’ area of Roy’s main table for this game. This is how the forces were deployed.


As you can see I was somewhat outnumbered but I did have several ‘A’ class units plus two ‘A+’ Old Guard battalions. Roy’s force was mostly ‘B’ class with I think one ‘C’ class as well. Under my Muskets & Marshals rules the unit class can make quite a difference in play, particularly in melee. We also introduced an initiative die roll system at the start of each turn (highest die roll gives initiative to that player – Napoleon always adding 1 to the die roll). The player with the initiative gets to declare charges first and the other player can only counter-charge on a die roll of 4,5 or 6. This helped to sort out a grey area in the rules regarding the charge/counter-charge sequence.

Anyway, enough waffle – this is what happened.

To be continued.
Posted by Stryker at 19:53 14 comments:
Labels: Battle Hanau 1813, Playing Soldiers 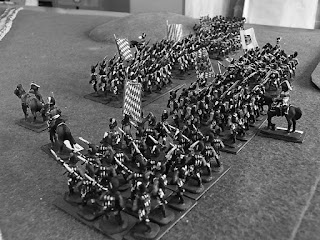 Roy and I got together yesterday to fight a game based on the Battle of Hanau 1813. It was just the two of us this time so the idea was to keep things small. Well, that was the idea but we still managed to put upwards of 600 Hinton Hunt figures onto a 6’ x 5’ area of table.

Roy commanded the Austro-Bavarian army (yes, he really has managed to knock up an entire Bavarian army since we played Vintage Waterloo) and I commanded the French. The forces were a bit unbalanced with the allies outnumbering the French but I think this helped to contribute to what turned out to be a most enjoyable game.

We played for a full eight turns and the game had a satisfying conclusion – a full battle report will follow!
Posted by Stryker at 10:16 12 comments:
Labels: Battle Hanau 1813, Playing Soldiers

Michael sent me these photos of some of his French and British Hinton Hunt forces. Click the images to zoom in for a good look.