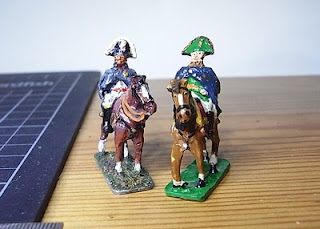 Actually they’re both FN/354 Marshal Ney but the one on the left is the result of a subtle conversion job by the previous owner whilst the slightly scary looking one on the right is the unadulterated version. I’ve had the converted one for some time but the other one is a new arrival and it’s been interesting to compare the two. Actually I think I like the converted figure the most.

You can’t help but feel a bit sorry for Michel Ney – he was definitely one of Napoleon’s greatest Marshals and his performance during the retreat from Moscow was nothing short of heroic. I know he changed sides a couple of times during his career but then many of the other Marshals did the same and they didn’t all end up in front of a firing squad as he did.

I suppose I must count myself lucky to have two Neys in my army. If Napoleon had been so fortunate during the Hundred Days things may well have turned out differently for him.
Posted by Stryker at 18:33 7 comments:
Labels: Conversions, General Staff 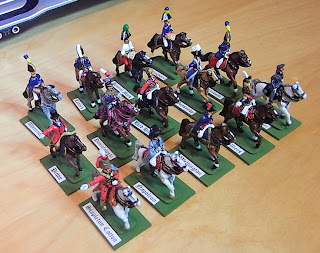 I was just putting away the figures after the conclusion of the Battle of the Farm and couldn’t resist putting all the personality figures together before they went back into the display cabinet.

One of the things I have always liked about the Hinton Hunt Figures range is the large number of personality figures produced – more than any other manufacturer even to this day. I don’t have all of them but I do have quite a few painted up and probably the same again waiting in the wings. I make use of them in my games by assigning each unit a personality figure as a Colonel that adds a bit of dash and colour to proceedings.

The Battle of the Farm is over but you’ll have to wait a bit longer to see the result.
Posted by Stryker at 18:02 6 comments:
Labels: Waffle

The Battle of The Farm – Part Two

While the cavalry melee developed on his left the Duke of Wellington was urging his Allies to advance on the opposite flank. General Mack hesitated slightly as he tried to make sense of his map but eventually he led the Splendid Splenys forward with the Russians moving on his right and beyond them Marshal Vorwarts with the Prussian Landwehr. 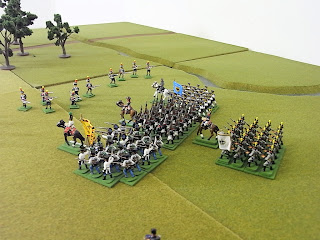 The Emperor saw the danger to his left flank and ordered one of his reserve Battalions of Swedes over to support the 45th Ligne. 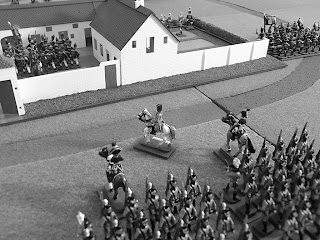 Napoleon at his HQ behind the Farm orders up some reserves

All the time the French skirmishers were causing considerable annoyance to the Allies even though the Austrian Jagers were trying hard to contain them. 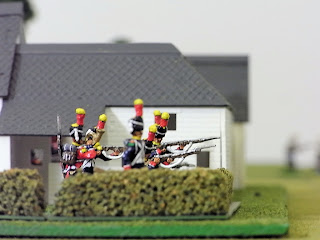 Goaded into action, one company of Jagers closed to contact with the enemy skirmishers and engaged in a fierce hand-to-hand combat amongst the cabbages. Sadly for the Allies they were repulsed.

Rule – Skirmishers: Skirmishers may melee with other skirmishers – pair off and roll one die each, highest wins (+1 for elites). 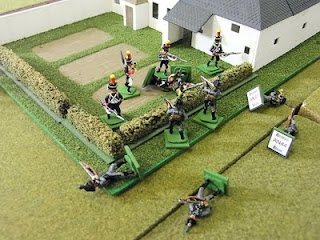 Tough fighting in the cabbage patch

With the advance from his right under way the Duke now ordered forward the Nassauers and the Naval Brigade in line formation. They immediately came under heavy fire from the Grenadiers in the Farm and casualties started to mount. 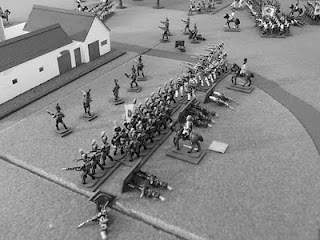 The infantry will advance…

To be continued.
Posted by Stryker at 21:00 4 comments:
Labels: Battle of the Farm, Playing Soldiers

The Battle of The Farm – Part One

It was clear to the Duke of Wellington that a battle was on the cards after the recent clash during his reconnaissance and with news that the Austrians and Russians would be joining him he decided to seize the initiative and take the fight to the French. His aim was to smash the smaller French force but to do this he knew his men must assault and take the Farm at the centre of the enemy line. 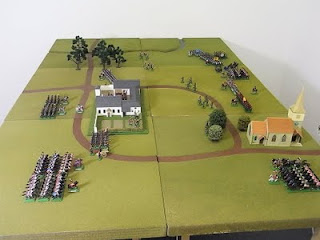 A general view of the battlefield

New Rule – Buildings: Buildings can either be placed on the table for purely aesthetic reasons (and have no impact on the game) or may be designated as a strong-point. A strong-point may be occupied by just one infantry unit at a time. Infantry in a strong-point may fire all their muskets from any side of the building during a turn or split their fire from different sides. 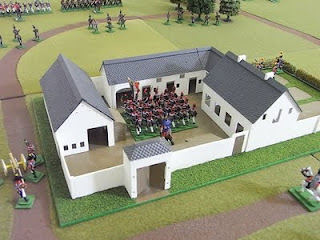 The French Grenadier Battalion was tasked with defending the Farm

The Emperor placed the elite converged Grenadier Battalion in the Farm with the 45th Ligne covering their left and the 4th Swiss their right. In reserve were two Battalions of Swedes (batting today for the French but only as 3rd rate line troops). The entire French Cavalry force of one Light and one Heavy Brigade were massed on the right flank supported by the Guard Horse Artillery. 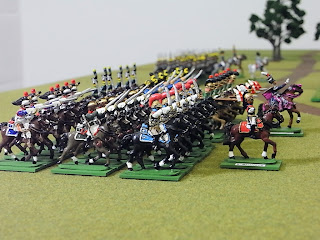 Napoleon massed his cavalry on his right flank

The battle began with a largely ineffectual artillery exchange although an early shot from the Prussian Field Artillery knocked out two Grenadiers and poor old Marshal Bernadotte who was leading them. These two hits forced a die roll to see if the Farm would catch fire but luckily for the French the roll was a 3.

Rule - Fires: Buildings taking 2 or more hits from artillery may ignite. Stone – 5,6. Wood – 4,5,6. They burn for 3 turns. At the start of move 3 any remaining occupants are removed as casualties. By the fourth turn nothing remains of a wooden building. A stone building will leave soft cover ruins and can be re-occupied on turn five.

Perceiving a weakness on the Allied left flank, Napoleon sent his cavalry forward at the charge. Stapleton Cotton ordered his Hussar Brigade to counter charge but they failed their morale check and instead met the enemy Heavy Cavalry at a standstill with predictably nasty results. 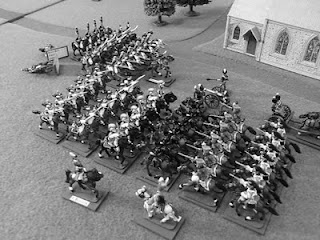 Mercer’s Horse Artillery got off one round of canister at the approaching French Light Cavalry but they kept their nerve and the gunners broke and ran. The French cavalry followed them all the way to the table edge.

New Rule – Pursuit: Immediately after a melee in which an enemy unit retreats or routs the victor’s roll 1 die. On a 4,5,6 (3,4,5,6 for all British cavalry) they must take an immediate pursuit move keeping in contact with the enemy. If the routers fall back through a supporting unit the pursuers stop once contact is made with the enemy support. A pursuing unit will stop and break off when the table edge is reached.