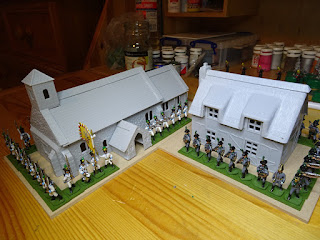 In the Leipzig game last year Roy had the idea to represent built-up-areas using an A4 sized piece of MDF. This worked quite well except that it threw up some problems of ground scale. Under my rules only one unit of infantry can occupy a BUA at any one time and the A4 size distorted the number of attackers versus defenders as it potentially enabled up to 6 units to attack the lone defending unit simultaneously. 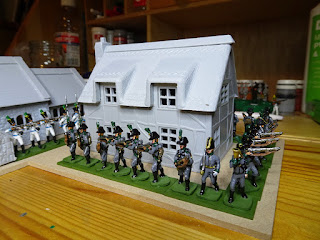 This was on my mind when I bought the recent clutch of Airfix buildings and I have decided to go back to my old idea of using individual buildings as separate BUA’s that can be joined together to form villages and towns. Each building will have its own separate MDF base that will project from the side of the structure by 25mm enabling the placing of a single rank of figures around the perimeter. During the movement phase the defender will be allowed to move any of his troops around the perimeter to meet a threat with no penalty to firing. Normal firing rules will apply with troops able to fire at any target in range (the old rule that up to 12 figures may fire from any side of a BUA will be scrapped).

I used a similar system years ago and it seemed to work quite well as I remember. I do need to have a rethink about Hougoumont type strongpoints as again these occupy a large area. The solution may be to divide them into two zones and allow a unit to occupy each. I will be rebasing my old La Haye Sainte model shortly and will put more thought to this then.

Note: those using figures mounted in 2 ranks can retain the old rule. I think I feel rule version 5.6 coming on…
Posted by Stryker at 08:47
Labels: Scenery

Those are lovely models Ian and look just the right scale for your figures. I think your rules sound sensible too, one thing that put me off Bolt Action was having to work out who was firing what weapon out of which window etc, things quickly bogged down, I much prefer the idea of allowing figures to be placed on an MDF base which represents the individual BUA, thats what we used to do with our ACW games years ago and it worked a treat. I was just thinking that cottage would be good for my new ECW's!

Lee - I think these buildings would work well with your 25mm ECW as it's best to have them a bit under scale.

Well thought out Rules and most logical. Do like your new buildings Ian. Cheers. KEV.

A sensible and practical solution (and it looks nice and tidy - in keeping with the collection).

Thanks Kev, sometimes simple is best!

Matt, Paul - thanks, I'm happy with this as a solution but I suppose now I'd better paint the things!

Excellent concept, I love the look of 20MM / 1/76 buildings they work well with 25 / 28mm wargame figures. I have been using faller HO buildings with my 25/28mm armies for several years now.

Anon - yes, I think they are spot on for my 20mm HH. The other way to go is 15mm buildings which also work well but are not right for this retro project.

I've had similar thoughts knocking around my own mind the last several days. I've been thinking about how to adapt/alter/borrow Charles Grant's ideas for 7-8 figures per building, but place them on a base outside said structure rather than inside. Early days yet on this.

Stokes - I have been admiring your growing city over your last few posts. It's certainly more practical to have the figures outside the buildings rather than try to fiddle around removing the roof etc.

I am pretty sure that we get buildings wrong in most sets of rules. Having visited some of those used in Napoleonic battles, at Wagram and Austerlitzand Hougoumont , for example, it struck me that :
1) Very few men can fire out of them. Even when loopholed a frontage is not anywhere near capable of delivering the volume of fire that a unit in line would . You could emplace cannon, but only as single guns, most useful for defensive use with grape, not for long range fire with ball.
2) Shooting into the building and hitting anyone with small arms is almost impossible. They tend to be substantially built of brick or stone and musket balls will not pierce them. Cannon stand a better chance, though field cannon of 6 or 9lb are not really delivering the weight of shot to raze a substantial building.
3) Inside buildings there is a substantial problem f command and control. Men are thinly spread, some in different rooms. Whereas Napoleonic tactical command and control depended upon being surrounded by your fellow soldiers and within reach of an officer or sergeant that is much harder disoersed around a building with loopholes some distance from each otger. If you build a firing step against a wall it will have a single rank along it, not a rpthree deep formation.
4) setting buildings on fire is a possibility, but hard to guarantee.
5) The threat of buildings is not that they can act as a firebase, it is that a large barn or a village might contain a battalion or two and that unit might issue out into your rear if you bypass it.
6) . Breaking into a building or built up area is not that difficult if you can get over the walls and in through the gates. Being in a column is no great advantage except that fallen men can be replaced easily to maintain the attack..
7) Once you break in the defenders can be cleared easily, though other buildings within a complex might hold up the attackers.
8) The attackers , once in the built up area have to organise their own defence and are vulnerable until then. I suggest this is why buildings change hands with. relative ease because the attackers are strong when going forward, but not stable when hit by organised opponents.

So the key, seems to be whether the attackers can break in or not, Guns can support them, but artillery is not going to do the job , it can only weaken the defence. Defenders cannot shoot the attackers off, they cannot deploy enough firepower. Fire from buildings should be skirmisher fire. Attackers can fire volleys or skirmish against walls, but hard cover is going to prevent most casualties. Against sbstantial walls the attackers will need ladders against substantial stone buildings they might blow the doors in. against barricades they can attempt to clamber over. The assault should favour the defenders, but if the attackers once get over the barrier then they will easily drive out the defenders because the defence has no solidity, compared to the attacking mass.

I was waiting for the moment when my two-deep basing system became obsolete, and voila. Drat and double drat.

Hi Ian,
I just checked out the Dapol site and ordered the church, two thatched cottages and the pub! They are so well priced I could not resist, especially having looked at 4ground where the village church kit in 28mm costs over £100.00! I was also searching for something a little under scale so these are perfect, thanks for the idea :)

With you all the way WM. Rule writers often miss the importance of basing with statements such as ' any base frontage will do as long as both are the same' changing basing is major, so major that it makes the war over which end to open an egg look like some meaningless eighteenth century rivalry between royal houses. Having set a base sze any change is agonising, risks figures and is usually for no great benefit. Someone earlier made the point for deeper bases and I can see the sense in that because bayonets are indeed vulnerable. However, having based to two deep because it is much easier to move the units and it looks good, as Ian said, no way would I move back to single lines.
Roy

Lee - glad to be of help! Most of the kits are even cheaper on Amazon. I have my eye on that pub to make a superb retro La Belle Alliance!

Inspiring stuff and very nostalgic - makes me want to dig my Waterloo Farmhouse out of the loft, but starting a new pair of 20mm armies is too much especially as I can't match Wellington Man's painting skills. Rob

Rob - I don't think anyone can match Wellington man's painting at 20mm but it's all about having fun, some of my most enjoyable games were with my unpainted Airfix Napoleonics as a kid!

For our various M&M games we adopted the following conventions:
1. BUAs are roughly 1 foot squares
2. Upto 12 figures may fire from a single side.
3. One defender is allowed per BUa. Their position is immaterial as they may move freely on interior lines
4. A maximum of 2 attackers may assault a BUA at once, again direction does nt matter but the smart attacker focuses on one side as that way they only take 12 shots

Stuart - to be honest you have more experience of playing the BUA rules than I have! I will need to do a bit of play testing and then tweak my new rule ideas.