Yesterday I made a trip to Tony’s to play a game with his amazing War of the Spanish Succession armies. His figures, as I’m sure most of you know, are mainly from the old Les Higgins 20mm range and they have a wonderful slender style quite unlike anything else in this scale. As you would expect, Tony has painted or renovated or commissioned and based these in his house style but with a nod to the more ‘toy soldier’ look they have been finished in gloss varnish.

I’ve seen some of the figures before via Tony’s blog and by Zoom but there is no substitute for seeing the massed ranks arrayed on the table in person. We had a most enjoyable game that I think ran for 10 turns as a playtest of Tony’s Prinz Eugen rules. I took some photos, but I’ll keep the narrative brief as I don’t want to reveal any spoilers before the full battle report appears on Prometheus in Aspic.

In other news… I finally got around to fixing the roof covering on the Hinton Hut following the various winter storms. 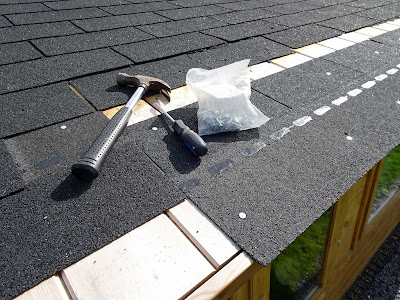 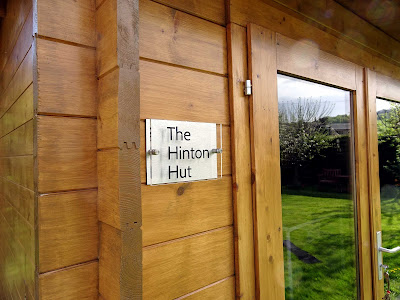 Hopefully the roof will stay intact at least until Christmas.

Posted by Stryker at 19:05
Labels: Off Topic, Playing Soldiers

The British may have a foothold on the ridge but it looks quite a lonely one.
Looks like the stiff lips may be about to wobble.
I shall keep an eye on the Prometheus blog (albeit I can't comment on it as I'm losing the current round in my ongoing hassles with Google).

You’re right, they are a bit lonely due to the supporting unit - John Churchill’s foot - being blown away!

A game result in these circumstances, based purely on unit losses, is a bit of a travesty since the Allies really did pretty well in attack, and should have scored something for that.

Well played - in fact well done just for reading the rules! Thanks for everything - I had a super day. I'll drop you some notes once I've pondered what we learned about the rules. Have to say that for a playtest it was remarkably good going!

Once again, your photos put mine to shame! - I must check out your camera, though I suspect it is the attached photographer that may be the deciding factor.

It was a great game Tony but now you’ve given the end away!

Ian - the ending is already splattered over my blog! - it wasn't a proper ending, anyway, so leaving it unresolved as we did was a sound idea - I have taken a note that victory conditions should make due allowance for objectives!

Louis XIV: "Monsieur l'Electeur, I understand that you lost the position on the ridge which you were to defend, and yet you have declared a national holiday to celebrate your glorious victory?"

Elector Max: "Your Majesty, I am pleased to report that we frightened their cavalry a bit, and killed a couple of brigadiers."

A wonderful WSS eye candy treat, I am so tempted to do this period with Les Higgins figures.
Fantastic blog.

TB - thanks but of course the figures all belong to Tony not to me!

Matt - it certainly is!

Eye candy at its best. I love Higgins figures.

I agree Jeffers and they look particularly good on mass!

Now that is what I call a fantastic looking wargames table. Beautifully done, and how nice to be able to share the experience in person. Of course what is most impressive is that you have shown not only are you an able painter, but a skilled construction roofer to boot! Very impressive.

David, the roof repair was actually a bit of a bodge but it seems to have done the trick!