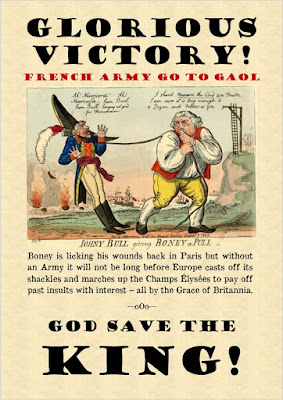 Hiding in houses or huddled in square? Those Frenchies just don't want to come out and play when faced with British cold steel - they don't like it up 'em. Of course one has to acknowledge that when encased in French steel they do seem to be a very different, and more dangerous, sort of beast.
Despite restricting the allied presence to a token unit leaving all the glory for John Bull, those Brunswick Hussars do seem to have upstaged us somewhat. I shall have to see if I can find a nice posting for them in the West Indies.

Rob, they’ll be egg on some faces at horse guards, best to ship them off quietly as you suggest!

It's those pesky foreign hussar who will be sent on foreign service - it really doesn't do to show up Horse Guards in front of the home crowd.

I’m sure you’ll be able to write them out in the ‘official’ history!

Not quite the rout I expected but made it a lot more interesting! Absolutely superb; thoroughly enjoyed this series and hope more are on the cards. Time to liberate Normandy…? 😉

Just excellent - great pics and a fine story line - have enjoyed this greatly, and hope you do more of this once the blackout ends. I fear the French were a little unlucky at times, though of course I feel a patriotic thrill that the Foreigner Johnnies were sent packing - now that's history as I was taught it!

I would hesitate to offer any criticism here - lack of qualifications to do so being a big factor - but I'd like to suggest that keeping the eagle underneath Marshal Ney's nose might have been tactically unwise. Anyway - super show. I'm going to rewind a bit and follow the map movement more carefully. There are lessons here for all of us.

That's the way to do it, though the Emperor must be disappointed; if he has a crest, it will be fallen.

Thanks Jeffers, I hope that the Emperor will strike back!

Tony, one lesson learnt is possibly not to make the rules up as I go along! Glad you enjoyed the show.

(However I have read in an piece form the "Oprah Republique" paper that as per all Droney's bad decisions it turns out they are all his dad's fault so we should cut him some slack, apparently).

My goodness but those Cuirassiers almost turned the tide! A delightful read and a marvelous execution of a great idea. Thoroughly enjoyed this campaign!

This whole campaign has been just glorious, Ian, and what an exciting finish.
Do please share your thoughts on the campaign system and how it might be tweaked. I'd love to try this sometime using the North Germany maps.

Matt, poor old Napoleon, it’s tough being an over privileged tyrant in the public eye!

David, glad you enjoyed the campaign!

WM, I will put together a post on the campaign system. The Murat maps are very inspiring and I already have an idea for the next theatre of operations but need to paint more Cuirassiers first!

This has been a most enjoyable series of games and reached a fitting climax.

Are you sure this was a major operation for Napoleon and not a side show masking his real intentions.

So Black is the new Leib. Will the entire 85th now claim asylum?

What’s left to say? This campaign has been sheer joy from end to end. Well done Ian and Rob.

Mark, glad you enjoyed it - there are rumours that the Emperor’s real objective lies somewhere along the Danube!

Nigel, apart from the Old Guard the 85th were the only unit to escape without a scratch from this campaign. I believe Wellington has now exchanged them for a shipment of good Bordeaux!


All the best. Aly

Thanks Aly, you had to be there to believe it!

Seems like the British cavalry lived up to their reputation for headlong charges and then loss of control.

Roy, yes a good day for the steady ranks of the Cuirassiers!

Lovely blog, nicely supported - following and looking forwards to more and also to dipping back, thanks.

Entertainment plus Ian! A rollicking, great fun report all set in time to your lovely, lovely figures and terrain.
Regards, James

Thanks James, it was fun but now it's time for some more painting!