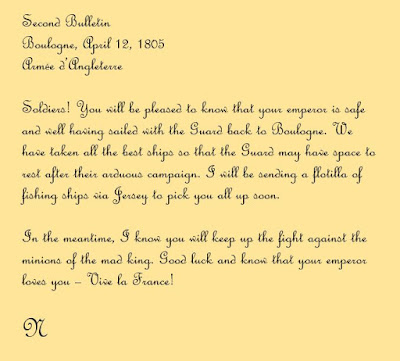 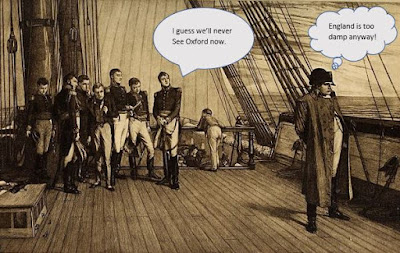 I expected a bit more intestinal fortitude from the so-called conqueror of Europe.
I think I would have tried at least one more throw of the dice.
I ask you, what's the point of shipping the Guard over here just to ship them back again?
But once again I'm left wondering - where is our bl**dy navy?

Rob, this was only ever meant to be a training exercise to toughen the army up for the real campaigning they have to do in central Europe. Good question about your navy though!

So glad to know that the Immortals are tucked up safely. I have some sympathy with Rob’s criticism of unnecessary foreign travel, but hey, their mounted colleagues did their share of dying. Look forward to your face saving with the real soldiers, Ian. Will the carabiniers ever get to cross swords with anyone?

Nigel, why is it that the prettiest cavalry always die first? The Guard are currently experiencing well earned R&R in Paris but I’m sure they will be in action soon!

Maybe you should try an easier target...

I hear Russian is weak...

Aly, Russia is indeed weak as I only have 3 units - this may be the solution!

Fear not Kev, there will almost certainly be one more game!

Oh yes! I can guarantee at least one more game!

I take it that true to form Napoleon will be on the first transport out!

Matt, the emperor has important matters of state to attend to in France so naturally he would take the first boat!

There is a Russian force a short distance away ready to support their comrades in defending Mother Russia. Just need to get the plague out the way.

Goya, shame they can’t make it here but if they did the weight of them would probably break the table!