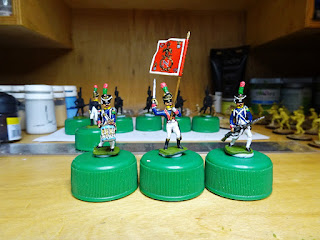 Although painting time is now officially over until after Christmas I just had to have a go at the Young Guard Flag Bearer. The figure used in the conversion is FN/70 Young Guard Officer (charging) and the amazing flag is the handiwork of Wellington Man.

I had to do another paint job conversion for the strap that holds up the flag (there must be a proper name for it) and I still need to do some touching up however I’m very pleased with the result. Of course Hinton Hunt never did produce either flag bearer or drummer for the Young Guard in common with several of their Napoleonic ranges and perhaps this was to encourage such conversions.

Three down, only twenty-one more to go.
Posted by Stryker at 20:32
Labels: Conversions, Guard

Super flag! and matchingly lovely figures. WM s a painting god!. The YGs are attractive because one can have interesting units that are not so highly rated that one only gets a few of them and they fought together . You can never have too many........some cool YG cavalry too.

Really wonderful work all the way around with the figures and eagle bearer!

Very nice. Why are there Airfix 8th army in the background? Are these off-season?

Roy - my aim is to have a unit that looks almost as good as yours!

Stokes - thanks for the comment, that flag really is the star of the show though!

Anon - good grief I didn't see those creeping in thanks for the heads up! Seriously though this is just a very very minor distraction.

You know I think that belt might be a baldric

The figures are wonderful of course, but that flag is something to behold, Matt is the master of the hand painted foil flag!

That flag would be a wonder at 54mm let alone 20. Looks like it is in good hands.

But I'm somewhat worried about fairness since the British 8th Army seem to be coming for it armed with magazine rifles and automatic weapons.

Lee - yes, his flags are even more amazing in the flesh, I'm very lucky to have this one and the Russian one!

Ross - it's a sneaky 8th army flank attack but obviously they can't actually take part in any combat until they've been painted!