I decided to complete a French limber to give me the complete set – one limber for each nation. Once again, all the castings used are vintage Hinton Hunt ones including the limber itself. 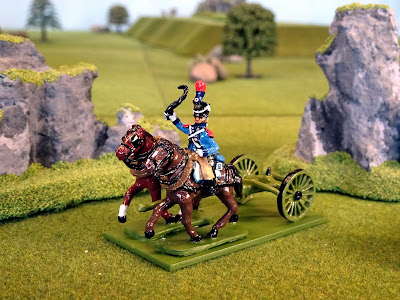 For some reason the Austrians seem to be annoyed that Napoleon captured Mack’s entire army at Ulm. The French were actually just trying to send engineers to help with the flood defences on the Danube when the bewildered Mack thought himself under attack and rode off at haste on a donkey.

Next stop for the Grande Armée – Vienna, we'd like to see the Opera House!

This is just the starting point of our campaign, turn one is now in progress.

To be honest Ross I wouldn’t know!

Hmm yes, that is a point!

Really rude of the Austrians for not thanking the Emperor Napoleon for his efforts on their behalf! Hope he teaches them a lesson!

Thanks WM, with a two-horse team these are quite relaxing to paint!

As for the Austrian misunderstanding it happens. We've all seen it, your neighbour turns up with a few hundred thousand mates for a well intentioned get together, before you know someone's "not standing on their side" and it get's blown out of all proportion.

Honestly, that how wars start.

Matt, you seem far more understanding than those Austrian chaps!

I thought the Grande Armee was captured on Boscombe Pier?

Jeffers, hmm you sound like one of those revisionist historians!

zum Teuffel und grosse Harrumphing. Try and get that past spellcheck. Time to avenge the infamy of Ulm. All power to the men in white and, err blue and green.....

The Limber looks very smart indeed. I have some Limbers to paint myself but are Newline ones.

Nigel, I’m sure Rob will do his utmost but just remember who wrote the rules and who’ll be playing the actual games!

Mark, this is the only HH French limber I have but I do have a couple of Newline ones myself somewhere.

I have complete confidence in the fair play and sense of humour of the man who wrote the rules and plays the games. Justice and honour will triumph, and we shall have cracking good entertainment in the process.

Fine looking limber Ian. The colours look spot on to me (without going to a book to check)!
Regards, James